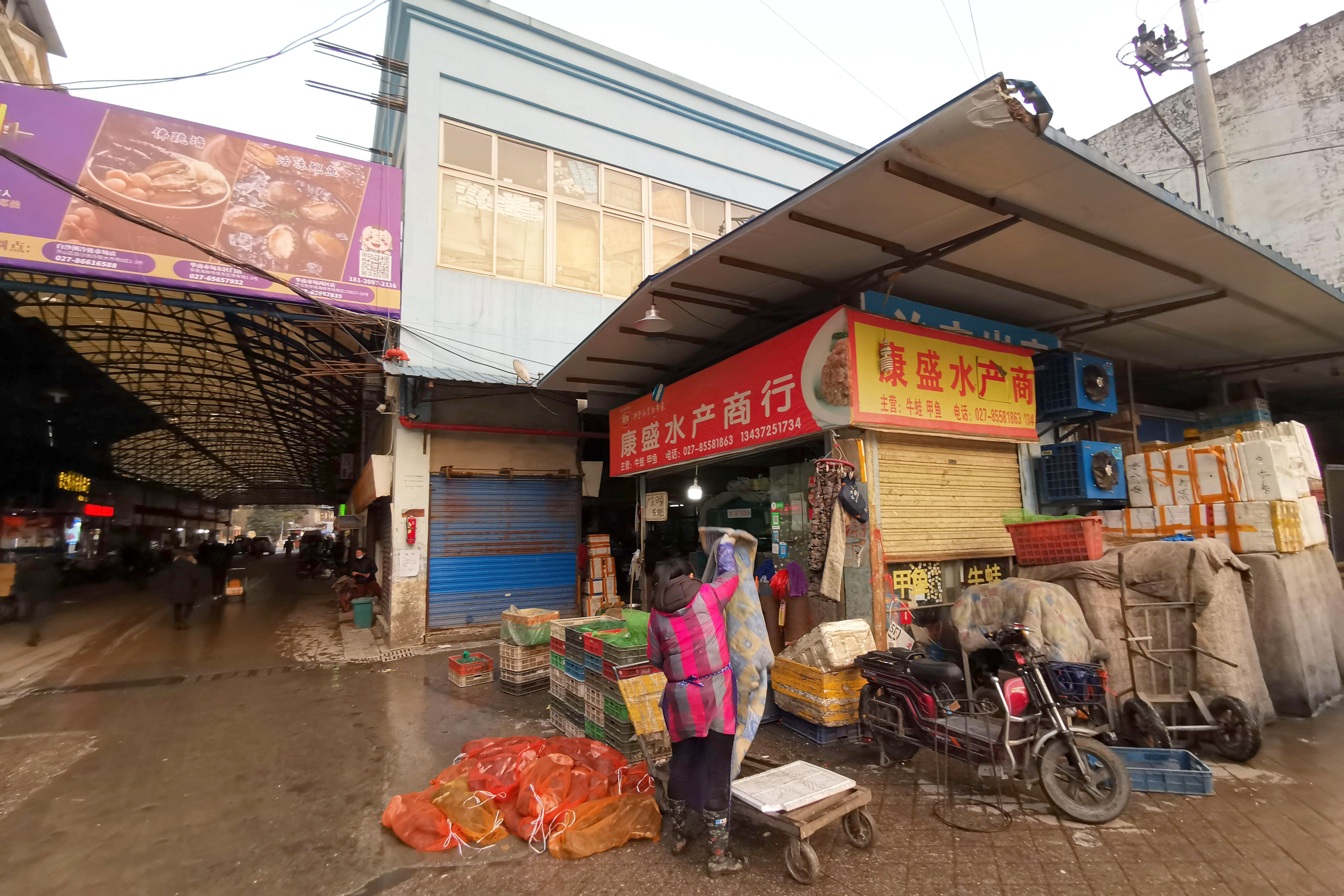 Scientists have released three studies that reveal intriguing new clues about how the COVID-19 pandemic started. Two of the reports trace the outbreak back to a massive market that sold live animals, among other goods, in Wuhan, China and a third suggests that the coronavirus SARS-CoV-2 spilled over from animals—possibly those sold at the market—into humans at least twice in November or December 2019. Posted on 25 and 26 February, all three are preprints, and so have not been published in a peer-reviewed journal.

These analyses add weight to original suspicions that the pandemic began at the Huanan Seafood Wholesale Market, which many of the people who were infected earliest with SARS-CoV-2 had visited. The preprints contain genetic analyses of coronavirus samples collected from the market and from people infected in December 2019 and January 2020, as well as geolocation analyses connecting these samples to a section of the market where live animals were sold. Taken together, these different lines of evidence point towards the market as the source of the outbreak—much like animal markets were ground zero for the severe acute respiratory syndrome (SARS) epidemic of 2002–2004—says Kristian Andersen, a virologist at the Scripps Research Institute in La Jolla, California, and an author on two of the reports. “This is extremely strong evidence,” he says.

Still, none of the studies contain definitive evidence about what type of animal might have harbored the virus before it spread to humans. Andersen speculates that the culprits could be raccoon dogs, a squat dog-like mammal used for food and for their fur in China. One of the studies he coauthored suggests that raccoon dogs were sold in a section of the market where several positive samples were collected. And reports show that the animals are capable of harboring other types of coronaviruses.

Some virologists say that the new evidence pointing to the Huanan market doesn’t rule out an alternative hypothesis. Namely, they say that the market could have just been the location of a massive amplifying event, in which an infected person spread the virus to many other people, rather than the place of the original spillover.

“Analysis-wise, this is excellent work, but it remains open to interpretation,” says Vincent Munster, a virologist at the Rocky Mountain Laboratories, a division of the National Institutes of Health, in Hamilton, Montana. He says searching for SARS-CoV-2 and antibodies against it in blood samples collected from animals sold at the market, and from people who sold animals at the market, could provide more definitive evidence of COVID-19’s origins. The number of positive samples from the market suggests an animal source, Munster says. But he is frustrated that more thorough investigations haven’t already been conducted: “We are talking about a pandemic that has upended the lives of so many people.”

In early January 2020, Chinese authorities identified the Huanan market as a potential source of a viral outbreak because the majority of people infected with COVID-19 at that time had been there in the days before they began to show symptoms, or were in contact with people who had. Hoping to stem the outbreak, Chinese authorities shuttered the market. Then researchers collected samples from poultry, snakes, badgers, giant salamanders, Siamese crocodiles and other animals sold there. They also swabbed drains, cages, toilets and vendor stalls in search of the pathogen. Following an investigation led by the World Health Organization (WHO), researchers released a report in March 2021 showing that all of the nearly 200 samples collected directly from animals were negative, but that more than 1,000 environmental samples from the stalls and other areas were positive.

A research team from China including the head of China’s Center for Disease Control and Prevention (CDC) has now genetically sequenced those positive samples, releasing the results in a preprint posted on 25 February. The scientists confirm that the samples contain SARS-CoV-2 sequences nearly identical to those that have been circulating in humans. Further, they show that the two original virus lineages circulating at the start of the pandemic, called A and B, were both present at the market.

“It’s a nice piece of work,” says Ray Yip, an epidemiologist who is a former director of the China branch of the US Centers for Disease Control and Prevention. “They’ve confirmed that the Huanan market was indeed a very important spreading location.”

As soon as the report from China posted online, Andersen and his colleagues rushed to post the manuscripts they had been working on for weeks.

In one, the team zeroed in on the southwestern section of the Huanan market, where live animals were sold as recently as 2019, as being the potential epicentre of the outbreak. They arrived at this conclusion by compiling information on the first known COVID-19 cases in China, as reported in various places, including the WHO investigation, newspaper articles, and from audio and video recordings of doctors and patients in Wuhan. This geospatial analysis found that 156 cases in December 2019 clustered tightly around the market and then gradually became more dispersed around Wuhan in January and February 2020.

They also examined the locations of the positive samples collected in the market, as reported in the WHO study, and fleshed out information about their potential surroundings by collecting business registration information, photographs of the market before it closed, and scientific reports that have emerged since the WHO’s investigation. For example, one paper published last year documented some 47,000 animals—including 31 protected species—sold in Wuhan markets between 2017 and 2019.

In one major finding in the new preprint, Andersen and colleagues mapped five positive samples from the market to a single stall that sold live animals, and more specifically to a metal cage, to carts used to move animals, and to a machine used to remove bird feathers. One of the coauthors on the report, virologist Eddie Holmes at the University of Sydney in Australia, had been to this stall in 2014 and snapped photographs—included in this study—of a live raccoon dog in a metal cage, stacked above crates of poultry, with the whole assembly sitting atop sewer drains. Notably, in the study from the China CDC, sewage at the market tested positive for SARS-CoV-2.

In a second report, Andersen and colleagues concluded that lineage A and lineage B of SARS-CoV-2 are too different from one another on a genetic level for one to have evolved into the other quickly in humans. Therefore, they suggest that the coronavirus must have evolved within non-human animals and that the two different lineages spread to humans separately. Because lineage B was the far more prevalent variety in January 2020, among other reasons, the authors suggest that it spilled over into humans before lineage A. Other outbreaks of coronaviruses, such as the SARS and Middle East respiratory syndrome (MERS) epidemics, also resulted from repeated introductions from wildlife, the paper notes.

Taking all of the new data together, and adding a degree of speculation, Andersen suggests that raccoon dogs could have been infected on a farm that then sold the animals at the markets in Wuhan in November or December 2019, and that the virus might have jumped to people handling them, or to buyers. At least twice, those infections could have spread from an index case to other people, he says.

‘As good as it gets’

Over the past year, Michael Worobey, a virologist at the University of Arizona, in Tucson, and an author on the papers with Andersen says that his thinking on the origins of COVID-19 has shifted. Back in May 2021, he led a letter published in Science in which he and other researchers pressed the scientific community to keep an open mind about whether the pandemic stemmed from a laboratory, a controversial hypothesis suggesting that SARS-CoV-2 was either created in a lab, or was accidentally or intentionally released by researchers at the Wuhan Institute of Virology. “You want to take this kind of thing seriously,” he explains.

But since May, additional evidence has come to light that supports a zoonotic origin story similar to that of HIV, Zika virus, Ebola virus and multiple influenza viruses, he says. “When you look at all of the evidence, it is clear that this started at the market,” he says. Separate lines of analysis point to it, he says, and it’s extremely improbable that two distinct lineages of SARS-CoV-2 could have been derived from a laboratory and then coincidentally ended up at the market.

Nonetheless, Munster says he is not completely convinced of two spillover events because, alternatively, the virus might have evolved from one lineage into the other within a person who was immunocompromised. He adds that more data collected from people and animals is needed to answer this question, and to show that the first spillover occurred at the Huanan market. David Relman, a microbiologist at Stanford University in California, agrees that the preprints are not definitive, and that they exclude the possibility that people were infected prior to the outbreak at the market, but went undiagnosed.

Holmes fears that additional samples from early human cases and from animals might never materialize. Last July, for example, Chinese officials said that they planned to analyse patient blood samples from 2019, stored at the Wuhan Blood Centre—but if that study has been conducted, it has yet to be made public. “This is as good as it gets,” Holmes says. “What we should focus on now is trying to keep these events from happening again.”

This article is reproduced with permission and was first published on February 27 2022.