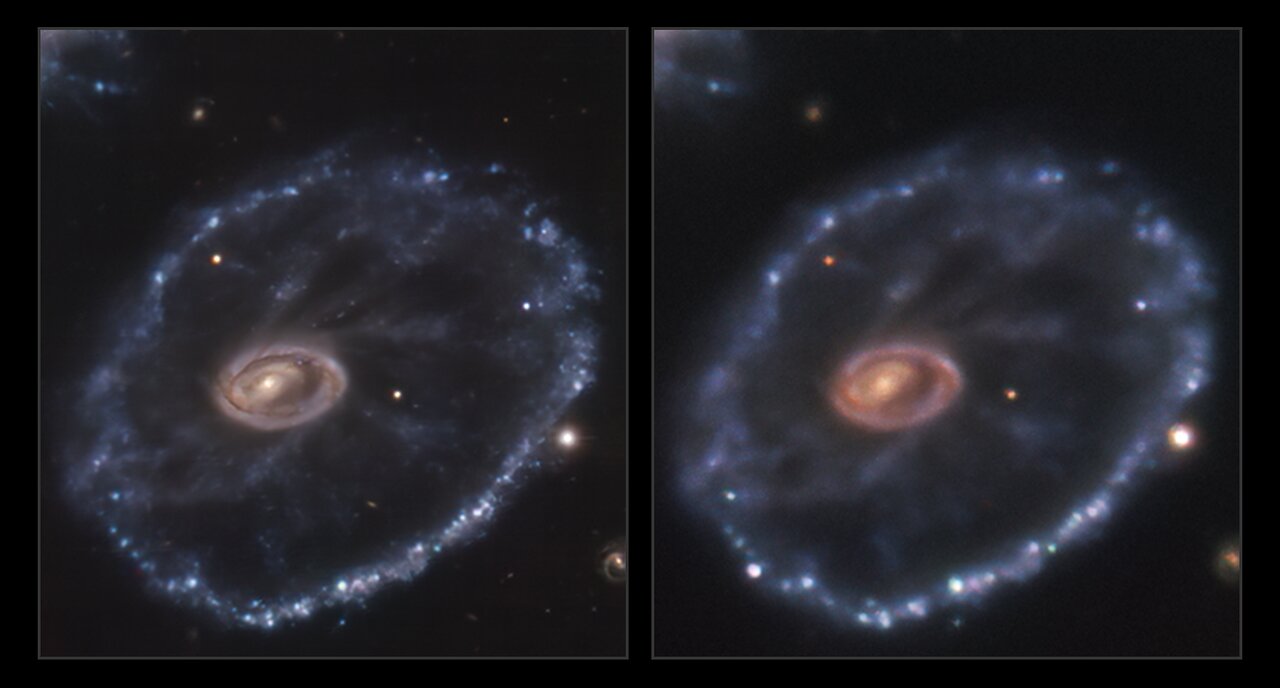 A new image from the European Southern Observatory (ESO) captures a stunning view of the Cartwheel galaxy following a recent stellar explosion.

Located roughly 500 million light-years from Earth in the constellation Sculptor, the Cartwheel galaxy is a spiral galaxy that merged with a smaller neighboring galaxy several million years ago, resulting in its unusual, two-rin shape.

Using the ESO’s New Technology Telescope (NTT) in Chile, astronomers photographed the Cartwheel galaxy in December 2021, only to realize that tucked away in what appears in the image as the lower left region of the galaxy, a supernova has burst on the scene. Supernovas are the bright stellar explosions that occur when massive stars reach the end of their lives; the explosion can be visible to observers for months, or even years.

And this particular supernova appears to have occurred fairly recently. Scientists were able to compare the new images with some taken in August 2014 by the Multi Unit Spectroscopic Explorer (MUSE) on ESO’s Very Large Telescope (VLT), also in Chile. Those observations do not show any trace of a supernova, according to a statement from the ESO.

This stellar event, dubbed SN2021afdx, is classified as what scientists call a type II supernova, which features hydrogen and is caused by a large star running out of the fuel that is required to keep the object from collapsing under its own gravity. When a supernova occurs, it causes a bright burst that can outshine the entire host galaxy; along with the light, the explosion also flings material across space.

“Supernovas are one of the reasons astronomers say we are all made of stardust: they sprinkle the surrounding space with heavy elements forged by the progenitor star, which may end up being part of later generations of stars, the planets around them and life that may exist in those planets,” ESO said in the statement.

Scientists recruited a few other telescopes to confirm the stellar explosion in Cartwheel. These telescopes, including the NASA-funded Asteroid Terrestrial-impact Last Alert System (ATLAS) in Hawaii, are specialized to study objects that are only briefly visible in the sky, like supernovas.

The ESO’s Advanced Public ESO Spectroscopic Survey for Transient Objects (ePESSTO+), another project based in Chile, also contributed data to the project. In particular, the observations allowed astronomers to measure radiation from the galaxy and confirm that the recent stellar explosion was a type II supernova, according to the statement.