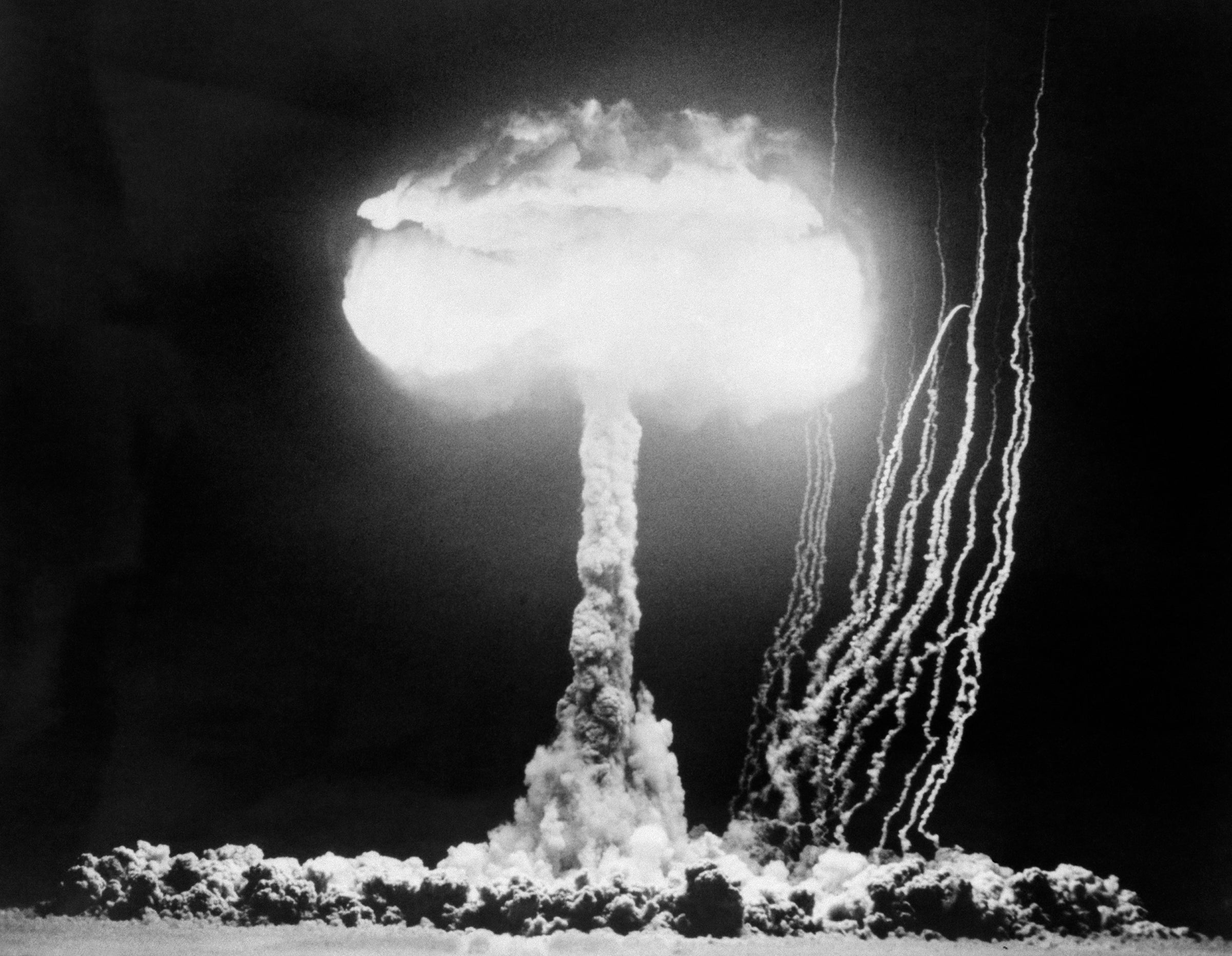 When Sandra Evans Walsh was growing up in Parowan, Utah, her class would sometimes trek outside to a row of trees. They were about to watch history in the making, the teacher would tell them. The kids would then stare as an orange shroud spread across the sky. “I remember the clouds coming over our town and writing our names in the dust,” she said in an interview with Justin Sorensen, a geographical information systems (GIS) specialist at the University of Utah’s J. Willard Marriott Library.

That dust had traveled around 200 miles, all the way from what is now called the Nevada National Security Site, where scientists once tested nuclear weapons. Between 1945 and 1962, U.S. researchers detonated around 200 bombs aboveground—100 of them in Nevada. Fallout from the nuclear tests—radioactive particles that were swept into the atmosphere and fell back down to the earth—found their way into crops and livestock, whose radioactivity humans took on when they consumed milk, meat and produce. Fallout takes many different chemical forms, one of which is iodine-131: an isotope, or version, of iodine that has the usual 53 protons but 78 neutrons instead of the standard 74. Inside the body, the thyroid gland will absorb iodine-131, which eventually decays to produce radiation that can cause thyroid cancer and other problems.

People, such as Walsh, who lived “downwind” of nuclear development and open-air explosions are now called “downwinders.” Mary Dickson, another downwinder, told Sorensen and one of his colleagues that she thought the attitude toward those in Utah who were affected by nuclear testing was, “you know, ‘They were Mormons and cowboys and Indians—who cares?’ In general, she added, “they test where they think there are populations that don’t matter.”

Sorensen and his team spoke to both women and dozens of other people for a project called the Downwinders of Utah Archive. Hosted by the J. Willard Marriott Library, the archive is an attempt to qualify, quantify and make accessible people’s experiences of, and effects from, the American legacy of nuclear weapons testing. In 2011 the Senate unanimously designated January 27 as the National Day of Remembrance for Downwinders. “The downwinders paid a high price for the development of a nuclear weapons program for the benefit of the United States,” stated the resolution establishing the designation.

But when the tests were conducted, no one had done the research necessary to truly calculate what that price would be. Wanting to understand the potential link between regional health issues and fallout from nuclear tests, the National Cancer Institute (NCI) undertook a study on Americans exposed to iodine-131 from the Nevada tests. The results were released in 1997 in a report entitled “Estimated Exposures and Thyroid Doses Received by the American People from Iodine-131 in Fallout following Nevada Atmospheric Nuclear Bomb Tests.” It was this document that first led Sorensen to the archival project. “We were just kind of wondering, originally, ‘What does this data look like if you put it on a map?’” he says, “because a spreadsheet doesn’t really tell you a lot.” Sorensen’s background is in GIS and cartography, so he took the NCI’s fallout data and overlaid them onto his home state. “It just really grew from there,” he says. “We started seeing there’s a story to be told.”

That story, Sorensen knew, included individual human narratives. So he and his team used their maps to pinpoint hotspots in the Beehive State. Advertising in heavily dosed places, such as St. George and Cedar City, the archivists asked people to come to their local libraries and share their experiences. “We came back with 30-plus interviews,” Sorensen says.

Some interviewees told Sorensen of men who examined their thyroids or of the potassium iodide pills teachers passed out to combat the effects of radiation. Dickson recalled watching public-information films starring Bert the Turtle, who taught kids to duck and cover in the event of a nuclear explosion. The film, though, was not really a warning about what your own country might do inside its borders.

Alongside the interviews, Sorensen collected hard geospatial data and analysis. Web visitors to his archive can survey iodine fallout maps, diagrams of mushroom-cloud heights for different test series, animations of nuclear air drops, milk consumption statistics from when contaminated cows passed their burden on and an interactive timeline of the explosive atomic age. “I was really surprised just how closely and accurately the interviews match the data,” Sorensen says. In particular, he cites a test in the Operation Upshot-Knothole series. Later the test was nicknamed “Dirty Harry” because it generated more fallout than any other continental boom, much of which ended up near St. George. “You hear this firsthand, and it brings all the information together,” he says.

Although no single illness can be conclusively tied to a test-site cause, investigations by the United Nations Scientific Committee on the Effects of Atomic Radiation and the International Physicians for the Prevention of Nuclear War and the Institute for Energy and Environmental Research, among others, have established links between radiation exposure and cancer occurrence. In the early 2000s a report by NCI and the Centers for Disease Control and Prevention estimated that fallout could have led to around 11,000 excess deaths. The NCI has also created a calculator that allows users to calculate their thyroid dose and risk of developing thyroid cancer from fallout. “We can’t know any individual’s cancer was caused by radioactivity,” explains Scott Williams, former executive director of HEAL Utah, a nonprofit advocacy group focused on the environment and public health, “but we do know that some people’s cancer risk was increased by radioactivity.”

Since 1990 the federal government has offered some recompense to downwinders and others affected by nuclear testing through the Radiation Exposure Compensation Act (RECA). Set to expire this summer unless a bill is passed to renew (and expand) it, RECA pays downwinders, test participants and uranium workers between $50,000 and $100,000—if they have specific ailments and can prove (with decades-old evidence that is sometimes hard to come by) they were in the wrong place at the wrong time. “We left a burden on unwitting citizens across the country without ever informing them,” Williams says. “We need to do the honorable thing and own the problem and not create these problems again.”

The Downwinders of Utah Archive is always expanding, and though Sorensen paused interviews during the pandemic, he plans to light the fuse again soon. He also hopes to expand the project to other Western states to preserve their history, too.

Making sure that information remains accessible is part of the point of the Downwinders of Utah Archive. The day of remembrance is, in its own way, an isotope of that openness. “Those kind of markers are really important…,” Dickson told Sorensen and his colleague. “Otherwise, you know, time marches on, and it’s like dipping a big spoon in the water. The rest of the water just fills in, and it’s like it was never there.”