Patagonian ice fields are among some of the fastest-melting glaciers on the planet. As these glaciers disappear, the earth that once lay beneath them is rebounding upwards at rates much faster than expected.

Now, scientists have worked out a gap in tectonic plates that began forming some 18 million years ago underneath now-shrinking ice fields is likely driving the recent rapid rock uplift seen in Patagonia, encompassing remote and sparsely populated areas where few seismic studies have been conducted before.

“Variations in the size of glaciers, as they grow and shrink, combined with the mantle structure that we’ve imaged in this study, are driving rapid and spatially variable uplift in this region,” says geophysicist Hannah Mark of the Woods Hole Oceanographic Institution, who led the study.

When glaciers melt, the earth that once lay beneath them rebounds and rises, no longer burdened by the colossal weight of miles-thick ice sheets.

This uplift, called glacial isostatic adjustment, usually occurs over thousands of years, not in decades, which appears to be happening in Patagonia. Along with the meltwater that gushes from glaciers, it affects how much global sea levels will rise under future climate warming scenarios that scientists are busy modeling.

Rapid uplift of more than 4 centimeters (1.6 inches) per year has been measured in the thinning northern and southern Patagonian ice fields that are just a fraction of their previous size.

A toe-length rise might not sound like much, but it’s an extreme, unusual, and sudden change on a continental scale – and the largest present-day glacial adjustment ever recorded.

In the new study, Mark and colleagues recorded seismic data around the Patagonian ice fields that straddle the Andes Mountains in southern Chile and Argentina, to map what was happening below the surface.

Data collection ran 10 months longer than initially planned, because the seismic instruments were trapped in Patagonia during the first year of the COVID-19 pandemic.

Those measurements, combined with other seismic data from local monitoring stations, revealed how a gap in the down-going tectonic plate almost 100 kilometers (60 miles) beneath Patagonia has enabled hotter, less viscous mantle material to flow underneath the continent.

These lower-than-usual viscosities in the mantle beneath Patagonian ice fields could quicken the continental uplift associated with melting ice to decades or centuries, if the researchers’ estimates are correct.

“Low viscosities mean that the mantle responds to deglaciation on the time scale of tens of years, rather than thousands of years, as we observe in Canada for example,” says seismologist Douglas Wiens of Washington University in St Louis.

“This explains why GPS has measured large uplift due to the loss of ice mass [in Patagonia].” 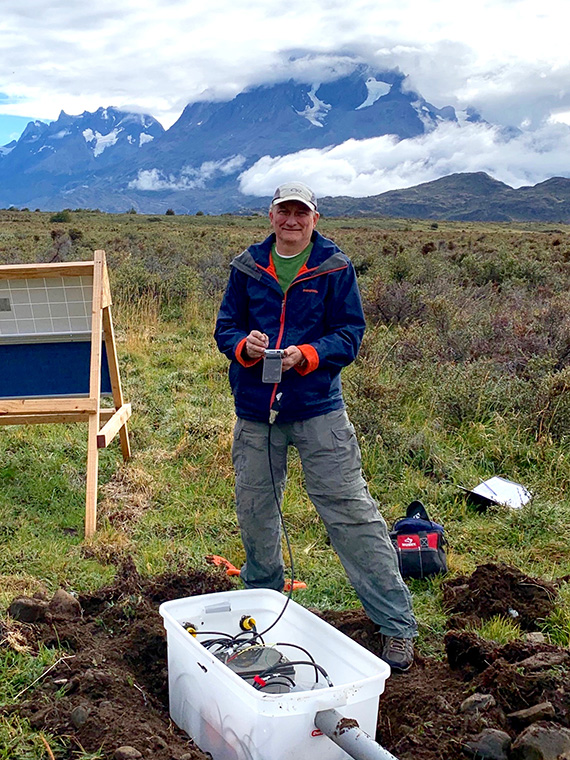 This anomaly indicates warmer mantle temperatures that likely thermally eroded the overlying lithosphere which is thinning underneath the shrinking ice fields.

Similar shallow, slow mantle velocities and a thinning crust have been detected beneath parts of Antarctica before, and though past research predicts the Patagonian uplift should peak around its current rate, estimates of mantle velocities are uncertain and sensitive to mantle temperatures – so the more measurements the better.

What’s more, the study found the hottest and least viscous parts of the mantle were close to the gap, or slab window, below the part of the Patagonia ice fields that had opened up most recently.

“This suggests to us that maybe the mantle dynamics associated with the slab window … have intensified over time, or that the continental plate in the south started out thicker and colder, and so was less affected by the slab window than the part of the plate farther north,” explains Mark.

Remote as Patagonia is, the ramifications of these glacial and tectonic changes will be felt globally, as fast-melting glaciers contribute to global sea-level rise that already threatens low-lying communities.

A better understanding of these shifting land masses can improve predictions of sea-level rise, and what scientists learn about glaciers in one part of the world can aid studies of ice masses elsewhere.

“Understanding the evolution of these glaciers helps us understand what glaciers in Greenland and Antarctica may look like in the future in a much warmer climate,” glaciologist Eric Rignot at NASA’s Jet Propulsion Laboratory said of the Patagonian ice fields.

“With better Earth models, we can do a better job of reconstructing recent changes in the [Patagonian] ice sheets,” adds Wiens.