A small pile of pebbles is clogging up the Perseverance Mars rover’s operations.

The rover, which is collecting rock samples for eventual return to Earth, began to struggle on Dec. 29, after extracting a core from a rock the mission team nicknamed “Issole.”

According to a NASA blog, the problem occurred in the device that transfers the drill bit and sample out of the rover’s drill arm and into a carousel inside the rover’s chassis for storage.

During the transfer, sensors within the rover recorded a higher-than-normal amount of friction at an unexpected point in the process.

The rover shut down and sent an alert back to Earth. Operators requested more data from the rover, but Perseverance took about a week to respond due to the mismatch between Martian days and Earth days, which restricts how quickly data can transfer.

Once the data arrived, the team ordered the rover to act as its own mechanic by removing the drill bit and undocking its drilling arm in order to photograph its own innards.

The resulting images revealed the problem: a small pile of pebbles inside the carousel. These bits of debris fell off the sample during the transfer process, blocking the drill bit from sitting properly inside the bit carousel. 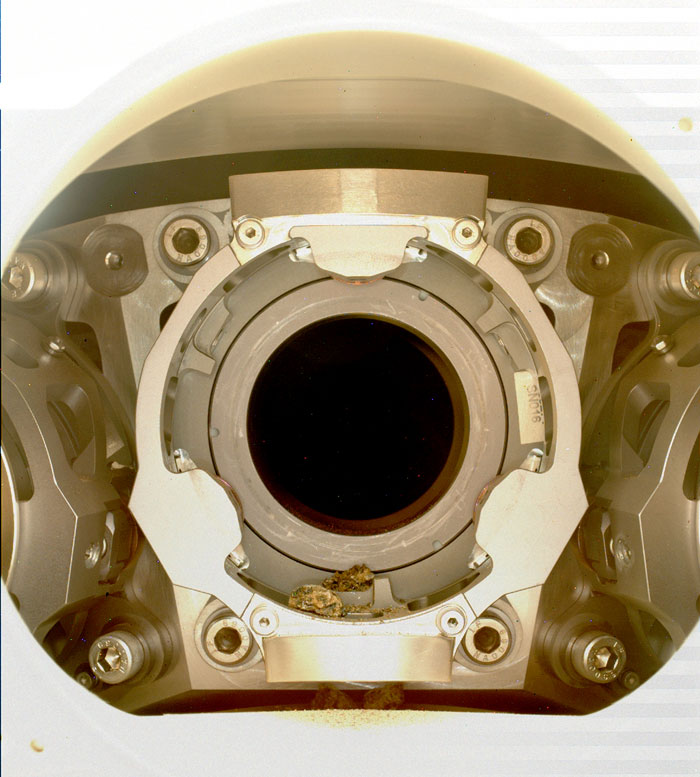 The carousel is designed to operate even in the presence of some debris, but NASA operators are taking their time to work out a solution.

“This is not the first curve Mars has thrown at us – just the latest,” Louise Jandura, chief engineer for sampling & caching at NASA’s Jet Propulsion Laboratory, wrote in the blog post.

“One thing we’ve found is that when the engineering challenge is hundreds of millions of miles away (Mars is currently 215 million miles from Earth [346 million kilometers]), it pays to take your time and be thorough. We are going to do that here,” she added.

The Perseverance rover landed on Mars on Feb. 18, 2021. It is exploring Jezero Crater, which was once a river delta.

The goal is to take rock and soil samples to assess the crater for signs that it once hosted life. The rover has equipment that can do some analysis on board, but the hope is that a future Mars mission will be able to retrieve and return the rover’s rock samples to Earth.

This is not the first time the Perseverance team has had to overcome a sampling hiccup. The rover’s very first attempt to collect a rock sample failed. But the rover soon succeeded in collecting a pair of rock samples in quick succession.

Mars on the cheap: Scientists working to revolutionize access to the Red Planet

Seeing things on Mars: A history of Martian illusions