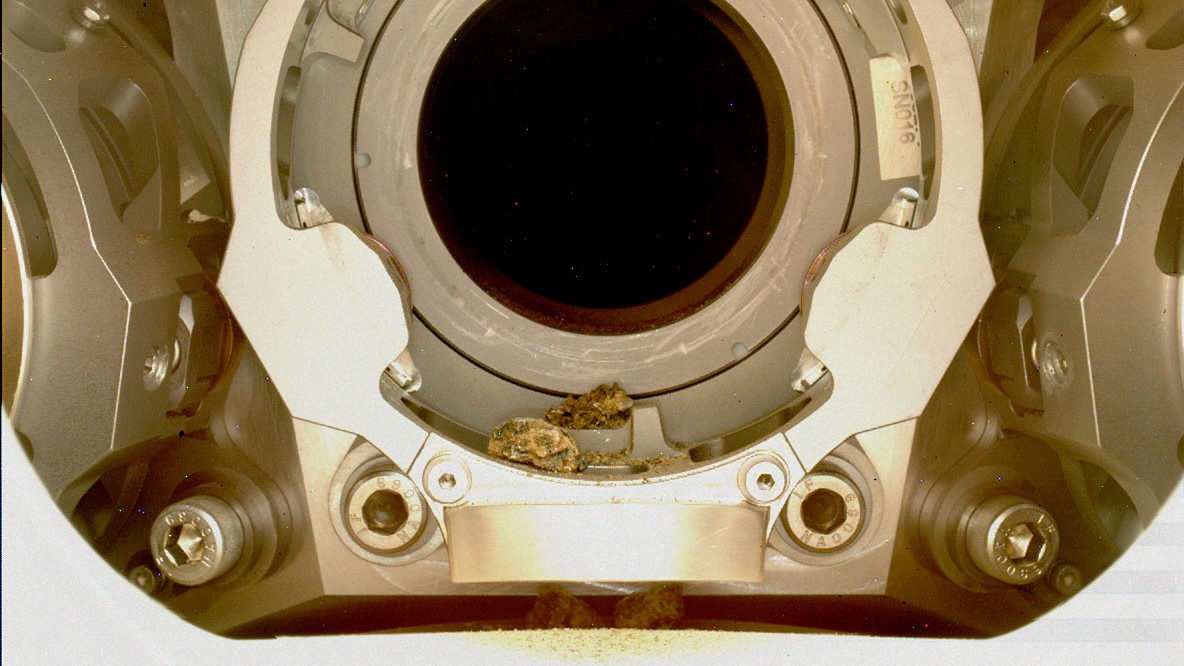 NASA’s Perseverance Mars rover has some rocks stuck in its throat.

Perseverance drilled and collected its sixth Red Planet rock sample late last month, but the car-sized rover hasn’t been able to seal up the titanium tube containing the material yet.

“I recently captured my sixth rock core and have encountered a new challenge. Seems some pebble-sized debris is obstructing my robotic arm from handing off the tube for sealing/storage. More images and data to come. #SamplingMars takes perseverance,” mission team members said on Friday (Jan. 7) via Perseverance’s Twitter account.

Perseverance landed in February 2021 inside the 28-mile-wide (45 kilometers) Jezero Crater, which harbored a lake and river delta billions of years ago. The rover has two main mission goals: hunt for signs of ancient Mars life and collect and cache several dozen samples. This pristine Martian material will be returned to Earth, perhaps as early as 2031, by a joint NASA/European Space Agency campaign.

Perseverance has already socked away five Red Planet rock samples. On Dec. 29, the six-wheeled robot collected sample number six from a rock the mission team calls Issole, coring the material out using the percussive drill at the end of its 7-foot-long (2.1 meters) robotic arm.

Everything went smoothly until Perseverance transferred the sample, which was already inside its titanium tube, into the “bit carousel,” a rotating, wheel-like structure on the rover’s chassis. Sensors recorded resistance unexpectedly early during this step, suggesting a blockage of some sort.

Late last week, the mission team instructed Perseverance to remove the sample-filled tube from the carousel and take some photos of the mechanism. Those images revealed pebbles in the bit carousel.

The Perseverance team is working through the issue now.

“The designers of the bit carousel did take into consideration the ability to continue to successfully operate with debris,” Louise Jandura, chief engineer for sampling and caching at NASA’s Jet Propulsion Laboratory in Southern California, which manages Perseverance’s mission, wrote in a blog post on Friday (Jan. 7).

“However, this is the first time we are doing a debris removal, and we want to take whatever time is necessary to ensure these pebbles exit in a controlled and orderly fashion,” Jandura added.

This isn’t the first sampling challenge that Perseverance has faced on Mars. For example, the rover failed to collect any material during its first sampling effort, which took place in August. The mission team determined that the target rock on that occasion was likely too soft, crumbling to bits that didn’t make it into the tube.

“One thing we’ve found is that when the engineering challenge is hundreds of millions of miles away (Mars is currently 215 million miles [346 million kilometers] from Earth), it pays to take your time and be thorough,” Jandura wrote. “We are going to do that here. So that when we do hit the unpaved Martian road again, Perseverance sample collection is also ready to roll.”