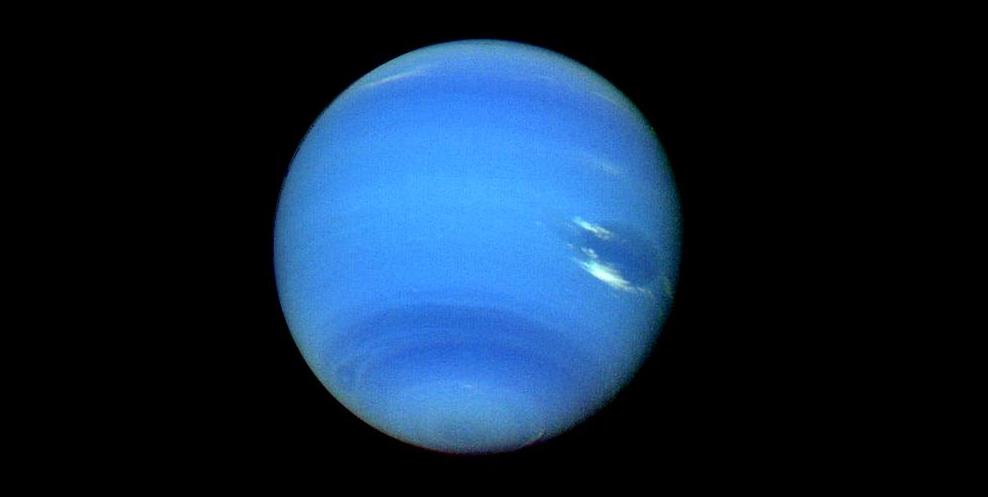 Neptune is the eighth planet from the sun in our solar system. This blue gas giant is far larger than Earth, at more than 17 times Earth’s mass and nearly 58 times Earth’s volume, according to NASA. Neptune’s rocky core is surrounded by a slushy fluid mix of water, ammonia and methane ice.

Astronomer Galileo Galilei was one of the first people to identify Neptune as a space object, however he assumed it was a star based on its slow movement. Around two hundred years later, in 1846, French astronomer Urbain Jean Joseph Le Verrier calculated the approximate location of Neptune by studying gravity-induced disturbances in the motions of Uranus, according to a synopsis written by researchers at the University of St. Andrews in Scotland.

At the same time Le Verrier was calculating the existence of Neptune, so was English astronomer John Couch Adams. The two scholars independently came up with nearly identical mathematical predictions about Neptune’s existence. Le Verrier then informed his colleague, German astronomer Johann Gottfried Galle, about his calculations, and Galle and his assistant Heinrich d’Arrest, confirmed Le Verrier’s predictions by viewing and identifying Neptune through the telescope at his observatory in Berlin.

In accordance with all the other planets seen in the sky, and as suggested by Le Verrier, this new world was given a name from Greek and Roman mythology — Neptune, the Roman god of the sea.

Related: The biggest mysteries about Neptune

Only one mission has flown by Neptune — Voyager 2 in 1989. Today, there are still many mysteries about the cool, blue planet, such as why its winds are so speedy and why its magnetic field is offset. While Neptune is of interest because it is in our own solar system, astronomers are also interested in learning more about the planet to assist with exoplanet studies. Specifically, astronomers are interested in learning about the habitability of worlds that are bigger than Earth.

Like Earth, Neptune has a rocky core, but it has a much thicker atmosphere that prohibits the existence of life as we know it. Astronomers are still trying to figure out at what point a planet is so large that it may pick up a lot of gas in the area, making it difficult or impossible for life to exist.

as-yet-unidentified compound and the result of the absorption of red light by methane in the planet’s mostly hydrogen-helium atmosphere.

Despite Neptune’s distance from the sun, which means it gets little sunlight to help warm and drive its atmosphere, Neptune’s winds can reach up to 1,500 mph (2,400 km/h), the fastest detected in the solar system so far. These winds were linked with a large dark storm that Voyager 2 tracked in Neptune’s southern hemisphere in 1989. This oval-shaped, counterclockwise-spinning “Great Dark Spot” was large enough to contain the entire Earth, and moved westward at nearly 750 mph (1,200 km/h). The storm seemed to have vanished when the Hubble Space Telescope searched for it at a later date, and since then, Hubble has witnessed the appearance and then fading of other Great Dark Spots on Neptune over the past decade.

Because of the high temperatures and pressures that exist on Neptune and Uranus, scientists believe compressed carbon in the form of diamonds causes a “diamond rain” phenomenon on these icy giants. In 2017, researchers were able to simulate the conditions that would cause diamonds to form in the lab, supporting the hypothesis that diamond rain occurs on Neptune and Uranus.

Neptune is surrounded by unusual rings, which aren’t uniform, but possess bright thick clumps of dust called arcs. The rings are thought to be relatively young and short-lived. Earth-based observations announced in 2005 found that Neptune’s rings are apparently far more unstable than previously thought, with some dwindling away rapidly, according to an article in the journal Icarus.

Neptune’s magnetic poles are tipped to the side by roughly 47 degrees compared with the poles along which it spins. As such, the planet’s magnetic field, which is about 27 times more powerful than Earth’s, undergoes wild swings during each rotation.

By studying the cloud formations on the gas giant, scientists were able to calculate that a day on Neptune lasts just under 16 hours long. Neptune’s elliptical, oval-shaped orbit keeps the planet an average distance from the sun of almost 2.8 billion miles (4.5 billion kilometers), or roughly 30 times as far away as Earth, making it invisible to the naked eye. Neptune goes around the sun once roughly every 165 Earth years, and completed its first orbit since being discovered in 2011.

Every 248 years, Pluto moves inside Neptune’s orbit for 20 years or so, during which time it is closer to the sun than Neptune. Nevertheless, Neptune remains the farthest planet from the sun, since Pluto was reclassified as a dwarf planet in 2006.

Neptune has 14 known moons, named after lesser sea gods and nymphs from Greek mythology. The largest by far is Triton, whose discovery on Oct. 10, 1846, was indirectly enabled by beer — amateur astronomer William Lassell, who discovered Triton, used the funds he made as a brewer to finance his telescopes.

Triton is the only spherical moon of Neptune. The planet’s other 13 moons are irregularly shaped. Triton is also unique in being the only large moon in the solar system to circle its planet in a direction opposite to its planet’s rotation — this “retrograde orbit” suggests that Triton may once have been a dwarf planet that Neptune captured rather than forming in place, according to NASA. Neptune’s gravity is dragging Triton closer to the planet, meaning that millions of years from now, Triton will come close enough for gravitational forces to rip it apart.

Triton is extremely cold, with temperatures on its surface reaching about minus 391 degrees F (minus 235 degrees C), making it one of the coldest places in the solar system. Nevertheless, Voyager 2 detected geysers spewing icy matter upward more than 5 miles (8 km), showing its interior appears warm. Scientists are investigating the possibility of a subsurface ocean on the icy moon. In 2010, scientists discovered seasons on Triton.

Related: What it would be like to live on Neptune’s moon Triton

In 2020, NASA announced the possibility of a new space mission to visit Triton, called Trident. “Triton has always been one of the most exciting and intriguing bodies in the solar system,” Louise Prockter, director of the Lunar and Planetary Institute of the Universities Space Research Association in Houston, who leads the Trident proposal team, said in the statement.

In 2013, scientists working with SETI caught sight of Neptune’s “lost” moon of Naiad using data from the Hubble Space Telescope. The 62-mile-wide (100 km) moon had remained unseen since Voyager 2 discovered it in 1989.

Also in 2013, scientists using the Hubble Space Telescope found the 14th moon, dubbed S/2004 N 1. It is Neptune’s smallest moon and is just 11 miles (18 km) wide. It got its temporary name because it is the first satellite (S) of Neptune (N) to be found from images taken in 2004, according to NASA.

To read more about how Neptune was discovered and plans for future research, read Thomas K. Adamson’s “The Secrets of Neptune” (Capstone Press, 2015). Two great books about Neptune for kids are Nancy Loewen’s “Farthest from the Sun: The Planet Neptune” (Picture Window Books, 2008), and Ellen Lawrence’s “Neptune: The Stormiest Planet” (Ruby Tuesday Books, 2013).