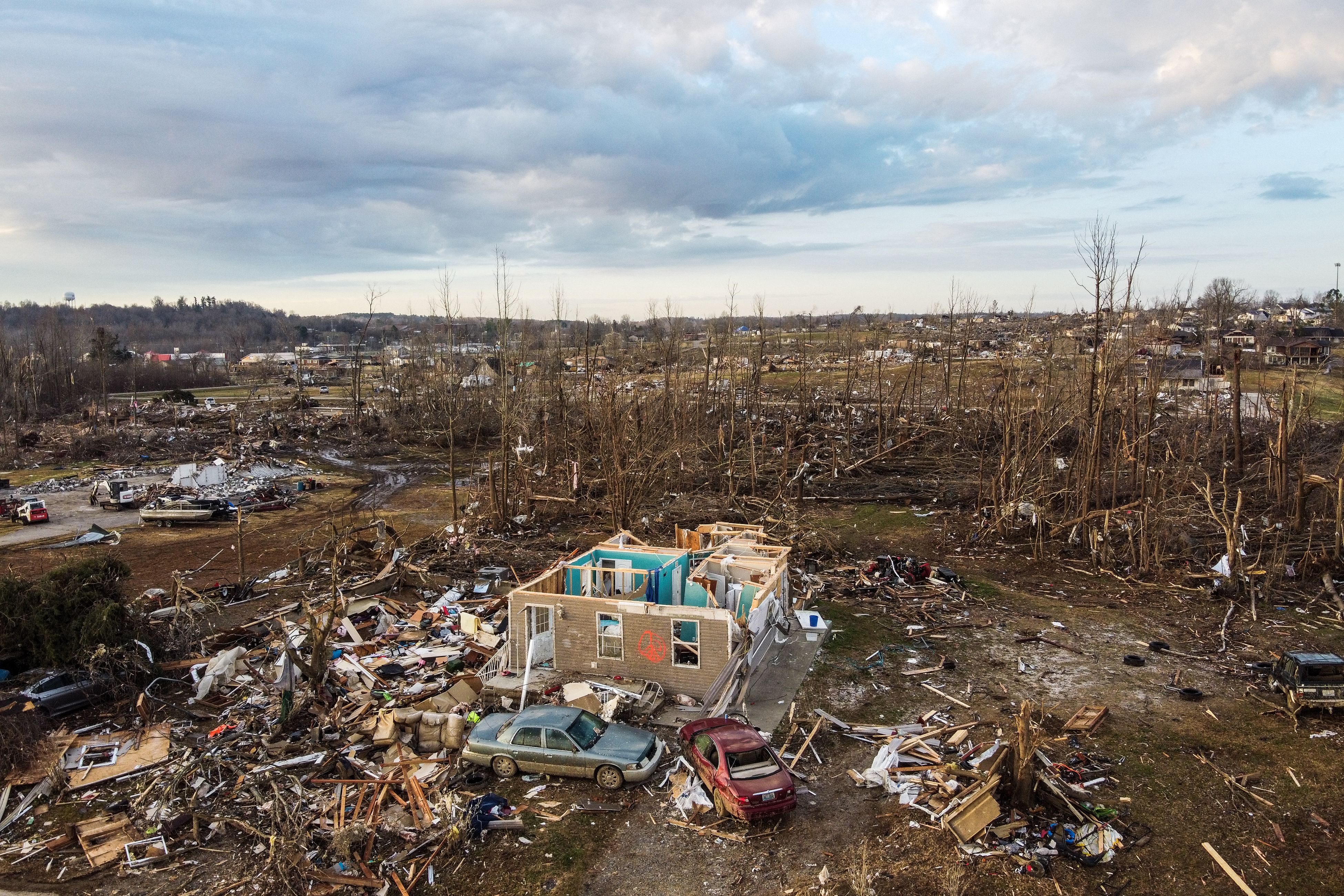 The monster tornado that destroyed the town of Mayfield, Ky., during last weekend’s deadly outbreak in the Midwest and Southeast may have traversed four states without ever lifting off the ground.

The National Weather Service (NWS) office in Paducah, Ky., confirmed to the Weather Channel this week that the “Quad-State Tornado” carved a continuous path of 128 miles through the office’s region of responsibility (which covers southeastern Missouri, western Kentucky, southern Illinois and the southernmost tip of Indiana) last Friday. Offices with bordering jurisdictions are analyzing whether the tornado went on to cover a total of 250 miles across Arkansas, Missouri, Tennessee and Kentucky. If it did so, it would break a record set on March 18, 1925, when the Tri-State Tornado ripped across 219 miles of Missouri, Illinois and Indiana.

From touchdown to dissipation, the Quad-State Tornado may have spent a stunning four hours on the ground. Most tornadoes survive for no more than 10 to 20 minutes, says John Allen, a meteorologist and climate scientist at Central Michigan University.

The recent twister was able to last so long because a number of crucial ingredients came together. The recipe for such a record-breaker starts with the right atmospheric conditions to create a supercell thunderstorm, the strongest of all thunderstorm types. Temperatures more characteristic of April than December—with highs around 80 degrees Fahrenheit—were a key factor, says Victor Gensini, an atmospheric scientist at Northern Illinois University. Allen agrees. “It [was] a very warm and muggy air mass,” he says, “and those are very ripe conditions for strong, severe thunderstorms.”

Supercell storms also require wind shear—winds blowing from different directions at different heights in the atmosphere—in order to form. There was plenty of wind shear on Friday, possibly owing in part to La Niña conditions. Atmospheric patterns during a La Niña event set up the jet stream over North America in a way that leads to cool-season storms in the Southeast, Gensini says.

These factors fuel an engine of rising and rotating air called a mesocyclone, which powers a supercell. Not all mesocyclones turn into tornadoes, notes Alexandra Anderson-Frey, an atmospheric scientist at the University of Washington. But the vast majority of damaging tornadoes start as mesocyclones.

In these potentially tornado-spawning storms, the mesocyclone begins to extend toward the ground, narrowing as it does. The leading theory for why this happens, Anderson-Frey says, is that the storm releases a downward-moving rush of precipitation-chilled air, which exerts a force that pulls the vortex toward the ground. As the resulting funnel cloud narrows, it begins to spin faster, much like a figure skater pulling in their arms to execute a tight rotation.

This particular storm’s strength and organization enabled it to hang together for many hours, helped by the fact that that there were no other storm systems nearby, Anderson-Frey says. When storms interact, they can weaken one another, she explains. For example, the cool downdraft of one storm might spread into another storm’s territory, robbing the second storm of warm, rising air that can power its growth. No such competition affected Friday night’s tempest. “Those favorable conditions, that lack of interference by other storms, that all seems to have been maintained for a very long time,” Anderson-Frey says. This allowed for conditions that supported the long-lasting tornado. (Multiple other tornadoes also formed in the supercell, but meteorologists are still trying to determine how many, and how long each lasted.)

Speed also played a role in how much ground the Quad-state Tornado was able to cover. The supercell that created it was moving forward at around 55 miles per hour because of the “extreme amounts of vertical wind shear,” Gensini says. Most thunderstorms churn along at a far more sedate 5–10 mph, which limits their reach. Long-track tornadoes are particularly damaging because they have more opportunities to hit buildings than shorter-lived twisters.

The death toll in Kentucky and surrounding states (currently 88) would likely have been even worse if people had not been tuned in to early warnings. “If you go back to the 1925 event, that killed 695 people,” Gensini says. “We’re not even close to that number of fatalities, and I think that speaks volumes to our ability to warn for, forecast and predict these kinds of events.”