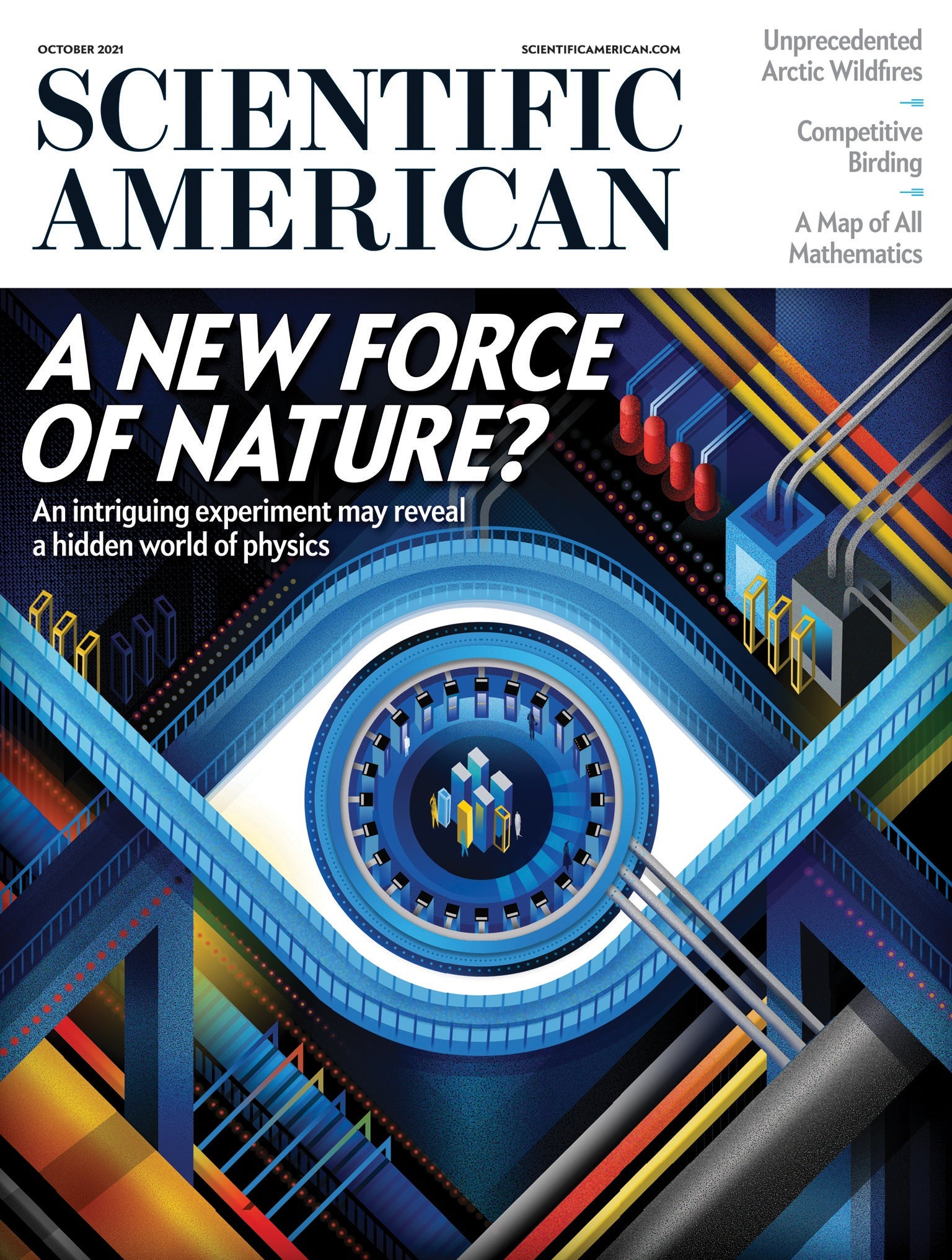 In “The Unseen Universe,” Marcela Carena describes apparent discrepancies between the observed behavior of muons—one of the three types of charged leptons—and calculations based on the Standard Model of particle physics. If the discrepancies for muons are real, I would also expect discrepancies for tau leptons.

As a shade-tree quantum mechanic, I wonder if the vibrations of muons are the effect of waves of gravity—the crests and troughs of the waves.

In her article, Carena states, “Starlight is the result of the electromagnetic force acting between the charged protons and electrons, liberating light energy at the hot surface of the star. The heat source of these stars, including our sun, is the strong force, which acts on the protons and neutrons to produce nuclear fusion.”

CARENA REPLIES: Snyder brings up a very good question. Indeed, the simplest explanation for the results of the Muon g-2 experiment introduces a new force that affects both muons and tau leptons but not electrons (the third type of charged lepton). This is because the rules of quantum mechanics are not consistent with the simplest kind of new force unless that force affects at least one other kind of particle besides the muon. Several other explanations for the Muon g-2 results also involve tau leptons, so it is important to think about how we might see something in an experiment with these particles. Tau leptons are much more unstable than muons and harder to produce in the first place, but one could imagine building a particle accelerator optimized for producing them—a “tau factory”—in the future.

A shade-tree quantum mechanic sounds like a very nice occupation! We think the effects of gravitational waves are too weak to be relevant to the Muon g-2 experiment, but what Jakubcin suggests is not far away from what string theorists are trying to do. They claim that everything we see is the result of vibrating strings, such that gravity is one kind of vibration, whereas the effects we see with muons are other kinds. If such a unified picture turns out to be correct, it might ultimately be the explanation for why there should be new exotic particles or forces affecting Muon g-2.

Uchida asks questions that deserve long answers, but here is a short summary: When we say “heat,” we almost always mean the kinetic energy of particles, which could be atoms, molecules or a plasma of charged elementary particles. Kinetic energy just means that the particles are rapidly moving. Charged particles (such as electrons) can emit photons, which are particles of light. This is a way to convert energy in the form of heat into energy in the form of light, as occurs in an old-fashioned lightbulb or at the surface of the sun.

Heat in our sun originally arose from gravity, which, billions of years ago, caused the gas that the sun is made of to collapse into a giant hot ball. Once this hot ball formed, however, the sun began to produce heat from a process called nuclear fusion.

In the first step of this fusion process, two protons inside the sun fuse into a deuteron while giving off a neutrino and a positron—the antiparticle of the electron. Then the deuteron captures another proton to form a helium isotope and emits a gamma-ray photon. The deuteron is a bound state of a proton and a neutron, and the binding comes from the strong force, which is carried by gluons. So indeed, fusion energy production in the sun requires gluons.

In addition, because one of the two protons must be converted to a neutron, the process requires a W boson, the carrier of what we call the weak force. It is actually a good thing for us that the weak force is weak because this is why the first step of fusion in the sun proceeds very slowly—meaning our home star will shine steadily for billions of years instead of exploding in a much shorter time.

“When Health Takes a Tumble,” by Claudia Wallis [The Science of Health], discusses a recent increase in dangerous falls among the elderly. As a 78-year-old retired physician, I think that perhaps one of the causes of these falls is the gradual diminution of proprioception—at least it is in my case. My balance is good (I walk on uneven, rocky ground every day), and my strength, though certainly decreased, is still adequate. But I have noticed my proprioception is off by just a bit, which is enough to cause problems. I drop items because my grip is not quite tight enough and stub my toe on thresholds and throw rugs. I also tend to bang plates and cups when placing items on the counter.

WALLIS REPLIES: Research confirms that proprioception—the sense of where one’s body is in space—does decline with age, as do other senses. It also suggests that appropriate physical activity can slow this decline—just another way that well-targeted exercise can reduce the risk of falling.

“More Food, Less Waste,” by Chad Frischmann and Mamta Mehra, started out with a major punch: given the current rate of population growth and economic development, by 2050 an area at least equivalent to India would have to be added to our global food production systems to meet expected needs. The article describes potential improvements to the efficiency of food use, mainly by reduction of waste, to tackle that issue, and they seem to be well worth attempting to achieve. But what about addressing the rise in food demand by trying to lower or reverse human population growth?

Whereas more efficient food usage makes sense for a variety of reasons, it might target the symptom rather than the cause. Perhaps Scientific American could present us with another article on how much food demand, as well as many other environmental problems, might be reduced if people across the globe adopted practices that would move total human population downward.

Gabrielle Bellot’s review of Black Sci-Fi Short Stories in “Exploring Black Sci-Fi” [Recommended; July] reminds me that about the time my first fantasy novel appeared with Warner Books, my editor, Betsy Mitchell, oversaw the publication of Dark Matter: A Century of Speculative Fiction from the African Diaspora (Warner Books, 2000). The anthology, which won a 2001 World Fantasy Award, was edited by Sheree R. Thomas. I was lucky enough to get a copy signed by Thomas, which she kindly addressed to my son.