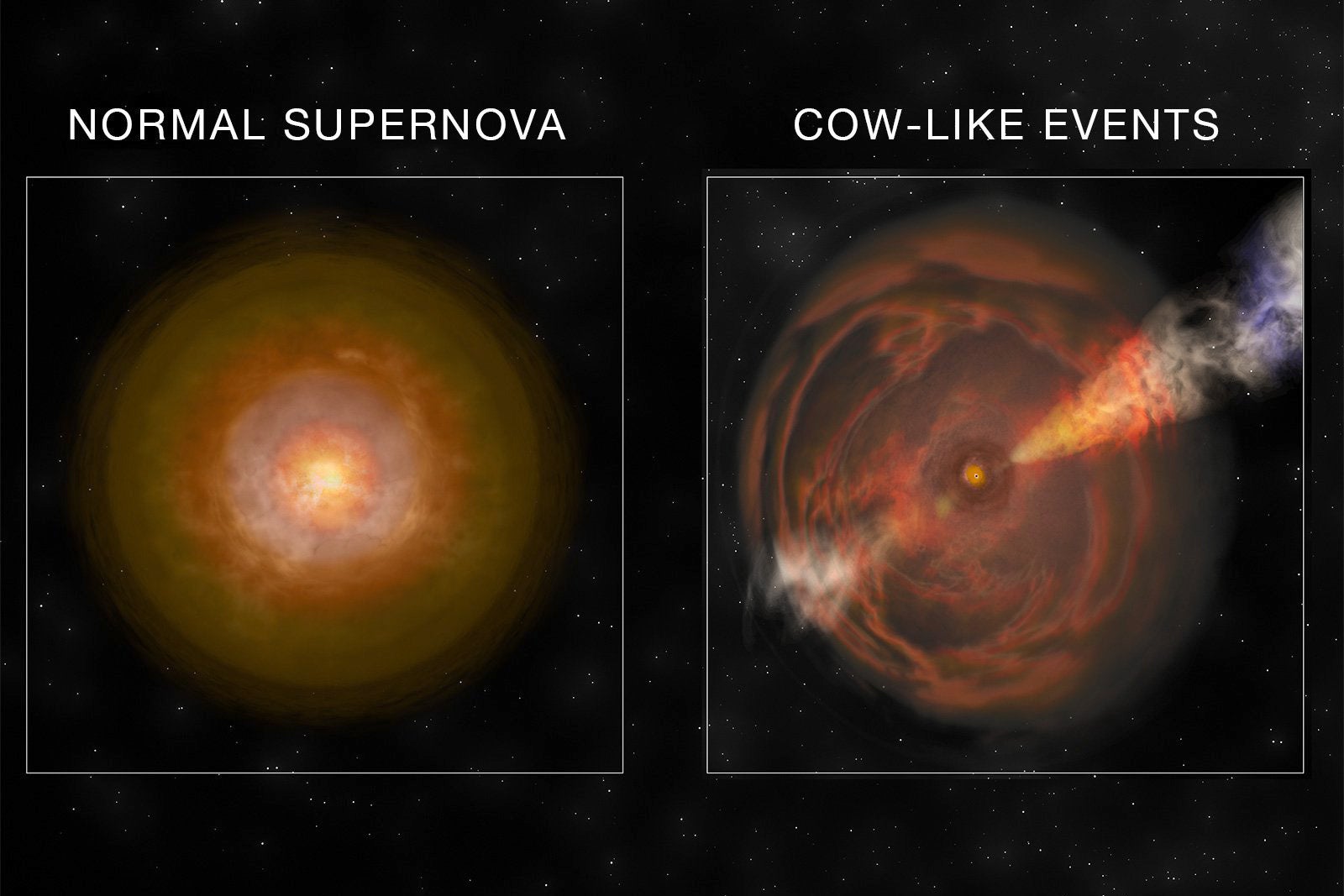 The night sky is filled with blips and flashes, a constantly changing sea of lights. Some of these changes are from Earth-bound happenings such as aircraft flying overhead, but some are from distant sources in space. Astronomers hunt for these fleeting phenomena, known as astronomical transients, by observing the sky regularly and looking for differences that appear.

Researchers recently found a transient that outshines all others like it—a supernova known as AT2020mrf. They described their discovery in a paper posted on the preprint server arXiv.org last December and submitted to the Astrophysical Journal. They also presented it at a virtual press conference at the 2022 American Astronomical Society meeting in January. This supernova was one of the brightest and most energetic stellar deaths ever seen, and it might provide a rare glimpse into how massive stars give birth to some of the universe’s strangest objects: black holes and neutron stars.

The biggest stars die in spectacular fashion. They explode with the energy of a nonillion (that is “1” with 30 zeros behind it) atomic bombs in a supernova, shining so bright that we can sometimes even see them in the night sky with our bare eyes. AT2020mrf was 10,000 times brighter in x-rays than a typical supernova. It followed a few other superbright events that have been observed in recent years—astronomers refer to them as “cow-like” supernovae, or “cows,” after the first of their type discovered: AT2018cow. Unlike traditional supernovae, cows shine brightly in high-energy x-rays and radio emission (most supernovae shine brightest in visible light). But AT2020mrf was the brightest cow of the bunch—20 times brighter than the original.

Astronomers Yuhan Yao and Shri Kulkarni, both at the California Institute of Technology, along with Anna Ho of the University of California, Berkeley, and Daniel Perley of Liverpool John Moores University in England, first spotted this explosion in June 2020 in visible-light images from the Zwicky Transient Facility (ZTF), an automated telescope at California’s Palomar Observatory. The bright spot they saw originally seemed like something unremarkable, and the astronomers ignored this event until almost a year later.

In April 2021 Russian scientists collaborating with Yao’s group noticed the same event while reviewing data from their Spectrum-Roentgen-Gamma (SRG) x-ray observatory. Their images from July 2020 showed x-rays at the same location as the bright spot in the ZTF data. Upon hearing the news, Yao’s mind jumped straight to the mysterious cow-like events because they are the only type of supernova known to emit so many x-rays. Although a year had passed, the initial explosion from AT2020mrf was so incredibly bright that Yao suspected she might still be able to see it with the Chandra X-ray Observatory. Her calculations were correct, and observations showed it clearly, glowing 200 times brighter than the original cow a year after AT2020mrf’s explosion.

Astronomers are still puzzling out what makes these supernovae special. The current theory is that cows have a very active “central engine”—something left behind by the star’s core, such as a black hole devouring matter or a neutron star rapidly spinning, that provides energy to the supernova. They also have less material shrouding this central region than most exploding stars, providing a view of their interesting center.

The stars that produce cow-like events appear to spew out material as they approach their death, making the environment around them denser and the stars themselves a bit smaller. When they explode, there is less gas in the immediate area around the star’s core, allowing x-rays from the central engine to escape. The shockwave the supernova sends through the surrounding space heats up the newly dense environment, too, creating the radio emission astronomers observe. Yao thinks that maybe AT2020mrf was even brighter than most cows because it had thrown off even more mass, allowing the central engine to shine through so brightly in x-rays.

“AT2020mrf is indeed an exciting event, both for what it confirms about the growing class of [cow-like objects] and what it tells us about the diversity of these mysterious stellar explosions,” says Brian Metzger, an astrophysicist at Columbia University and the Center for Computational Astrophysics.

With only four previously known cow-like events, AT2020mrf more firmly establishes this group as a new category of explosion. The recent blast also stands out from its classmates, showing the fascinating diversity of stellar deaths. Although scientists understand the broad strokes of how massive stars die, the details are still fuzzy. This is especially true for certain stages of the end of a star’s life, such as the silicon burning stage, the last round of fusion a large star can complete, when it fuses silicon together to create iron. This period lasts only around 18 days out of the star’s million- to billion-year lifetime. Cows may provide a window into that hard-to-observe time frame and sharpen our understanding of how black holes and neutron stars are born within supernovae.

AT2020mrf and the other cows are also simply thrilling to scientists. “I like the excitement when I just see how one source is different from all others,” Yao says. “You know, maybe once in a lifetime, you’ll find one of those events, and you need to take action. You need to stay on top of everything to tell the story of the object.” Future observations with the Vera C. Rubin Observatory, an upcoming sky-surveying powerhouse, and other telescopes will hopefully give astronomers even more information to work with.