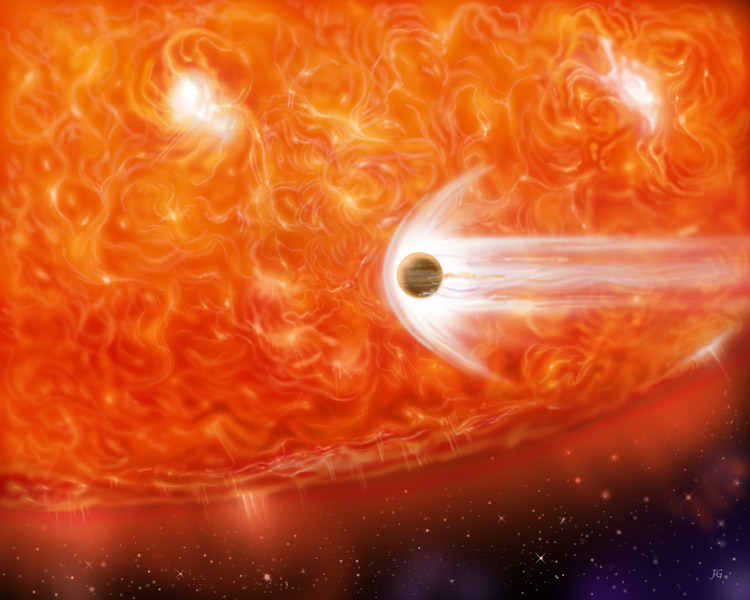 A red giant is a dying star in the final stages of stellar evolution. In about five billion years, our own sun will turn into a red giant, expand and engulf the inner planets — possibly even Earth.

What does the future hold for the light of our solar system and others like it?

Star facts: The basics of star names and stellar evolution

Most of the stars in the universe are main sequence stars — those that convert hydrogen into helium in their cores via nuclear fusion.

Over the course of their “normal” lives, the outward pressure of fusion inside main sequence stars balances out the inward pressure of gravity. Once the core fusion stops, however, gravity takes over and begins compressing the star.

“This raises the internal temperature of the star and ignites a shell of hydrogen burning around the inert core,” Swinburne University of Technology in Australia wrote in a stellar evolution explainer.

“Meanwhile, the helium core continues to contract and increase in temperature, which leads to an increased energy generation rate in the hydrogen shell,” the explainer continues. “This causes the star to expand enormously and increase in luminosity — the star becomes a red giant.”

Red giant stars bloat to 62 million to 620 million miles in diameter (100 million to 1 billion kilometers) — 100 to 1,000 times wider than our sun is today. Because these stars’ energy is spread across such a large area, their surface temperatures are actually relatively cool, reaching only 4,000 to 5,800 degrees Fahrenheit (2,200 to 3,200 degrees Celsius), a little over half as hot as the sun. This temperature change causes stars to shine in the redder part of the spectrum, leading to the name “red giant,” though they are often more orangish in appearance.

Red giants’ core temperatures, however, continue to rise as the core contracts further, eventually reaching levels where helium fuses to form carbon. (This is known as the “triple alpha process” because it involves three helium-4 isotopes, or alpha particles.) If the star is at least 2.2 times more massive than our sun, helium-to-carbon ignition is a relatively gradual process. But for less hefty stars, it occurs with an explosive flash.

Eventually, the helium in the core runs out and fusion stops. The core shrinks again and a helium shell just beyond it ignites, as happened with hydrogen shortly after the star burned through its stores of that initial fuel.

This ignition causes the giant’s outer layers to expand even further, but its core continues to collapse in on itself. The star eventually becomes incredibly compact, turning into a superdense object known as a white dwarf. Around the time of this transition, the star ejects its outer layers in huge clouds of gas and dust known as planetary nebulae. (The misleading name was given by early astronomers, who thought these sky sights looked like planets.) These shells are much larger and fainter than their parent stars.

After spending about 1 billion years as a red giant, our own sun will become a white dwarf, packing most of its initial mass into a sphere roughly the size of Earth. This fate awaits many other stars as well — all of them that are less than about eight times more massive than the sun, in fact.

The end-of-life scenario for giant stars is different. Stars roughly eight to 40 times more massive than the sun, for example, go through a “red supergiant” phase. Their cores get hot enough to burn carbon, which our sun never will, and they eventually die in powerful supernova explosions. When it’s all said and done, these massive stars leave behind either a neutron star or a black hole.

And this all happens quite quickly, cosmically speaking, because huge stars burn through their fuel very fast. For example, while our sun will end up fusing hydrogen in its core for about 10 billion years, stars that become red supergiants exhaust their reserves in just 10 million years or so. And they march through the other late-life steps even faster than that.

In recent years, astronomers have gotten some good looks at a few relatively nearby red giants, learning more about how these behemoths operate.

In 2017, for example, an international team of astronomers examined the surface of the red giant π1 Gruis using the European Southern Observatory’s Very Large Telescope. They found that the star, which lies about 530 light-years from Earth, has just a few convective cells, or granules, each of which is about 75 million miles (120 million km) across. By comparison, the sun has about two million convective cells, and each one is about 930 miles (1,500 km) across.

“Our measurements of the bright spot suggest there are powerful shock waves in the star’s atmosphere that reach higher temperatures than are predicted by current theoretical models,” Theo Khouri, an astronomer at Chalmers University of Technology in Sweden and co-author of a study reporting the results, said in a statement at the time.

Red supergiants are coming into slightly clearer focus as well. For instance, Betelgeuse began dimming noticeably in fall 2019 and had lost about two-thirds of its apparent brightness by the following February. Some astronomers thought the giant star might be entering its death throes, the final stages before it was destroyed in a supernova explosion.

By April 2020, however, Betelgeuse — which is 11 times more massive than our sun and 900 times more voluminous — had brightened back up to its normal levels. It appears that the “Great Dimming” was caused by a cosmic dust cloud, which temporarily came between the star and telescopes here on Earth. Some intrinsic cooling of the star may have played a role as well, researchers have said.

The future of the sun

In approximately five billion years, our own sun will transition to the red giant phase. When it expands, its outer layers will consume Mercury and Venus and also reach Earth. Scientists are still debating whether or not our planet will be engulfed, or whether it will orbit dangerously close to the red giant sun. Either way, life as we know it on Earth will cease to exist.

In fact, surface life on our planet will likely be wiped out long before the sun turns into a red giant. Our star has been getting warmer over the eons, as main-sequence stars of its mass do, and in a few hundred million years, it will be hot enough to start evaporating the oceans. So there may not be much left for our bloated, red-giant sun to destroy.

“The future of the Earth is to die with the sun boiling up the oceans, but the hot rock will survive,” astrophysicist Don Kurtz, of the University of Lancashire, told Reuters.

Our changing sun may provide hope to other planets, however. When a star morphs into a red giant, it changes its home system’s “habitable zone,” the range of orbital distance where liquid water can exist on a world’s surface. Because a star remains a red giant for approximately a billion years, it may be possible for life to arise on distantly orbiting planets and moons, which will finally receive some warmth.

“When a star ages and brightens, the habitable zone moves outward, and you’re basically giving a second wind to a planetary system,” exoplanet scientist Ramses M. Ramirez, a researcher at Cornell University’s Carl Sagan Institute, said in a statement. “Currently objects in these outer regions are frozen in our own solar system, like Europa and Enceladus — moons orbiting Jupiter and Saturn.”

The window of opportunity will be open only briefly, however. When the sun and other smaller stars shrink back down to white dwarfs, the life-giving light will dissipate. And supernovae from larger stars could present other habitability issues.

You can find good introductions to the basics of stellar evolution at this Swinburne University of Technology page and from NASA here. To learn more about red giants in particular, check out this lecture posted by the University of Oregon. And NASA’s exoplanet site has a nice summary of what will happen in our solar system when the sun becomes a red giant.