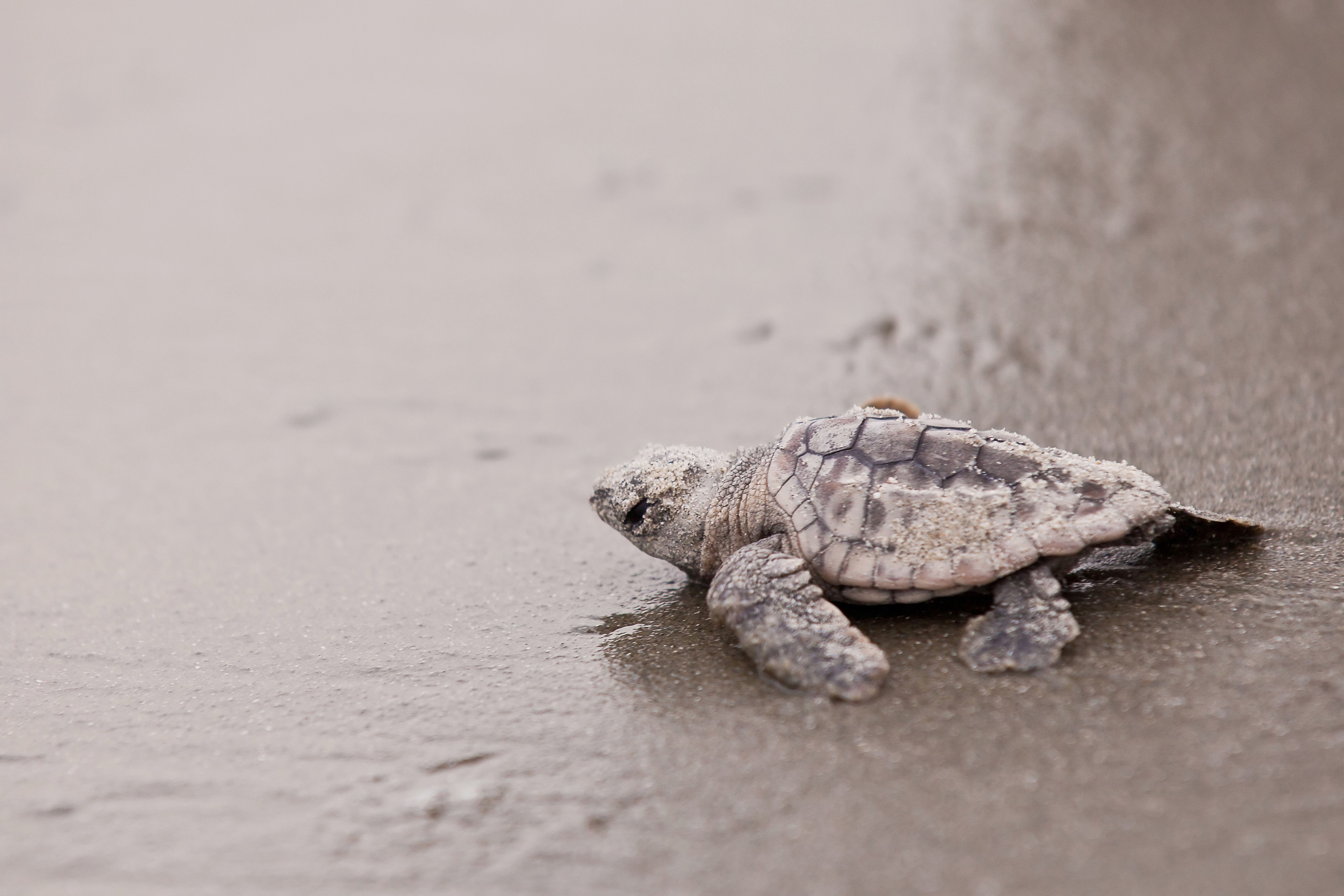 Under cover of darkness, the female turtle crawls up the beach. Her front flippers alternate to pull 250 pounds of shell and flesh towards the dunes, inch by inch. Encased in heavy armor of fused ribs and bony plates, an adult sea turtle is safe from all but the fiercest predatory fish. The smooth shell, oarlike flippers and massive lungs allow sea turtles to glide gracefully through the saline underworld. On land, gravity and friction reign. She is ashore for just an hour or two. Each turtle makes this journey up to six times in just a single nesting season. It’s no wonder she’ll need two to three years to recuperate before she can nest again. Her brief visit will help preserve one of the world’s most nutrient-deprived ecosystems, even if a single egg never hatches.

Like much of the world’s megafauna, sea turtle populations experienced a dramatic decline during the 20th century. Commercial trawlers caught turtles as bycatch and beach communities allowed condos on nesting grounds. But the tale of the sea turtle has taken a different route than that of the highly endangered rhino and a nearly extinct porpoise called the vaquita.

Thanks to monumental conservation efforts, sea turtles along the Atlantic coast of the United States have reversed their downward spiral. Through properly enforced policy and management, we protected beaches, enacted lighting ordinances and changed the way we fished. Since the 1990s, trawlers in U.S. waters have been legally required to use nets that protected turtles. A multi-agency land acquisition effort in 1991 resulted in the establishment of Archie Carr National Wildlife Refuge, whose beaches are home to 20-35% of loggerhead and green turtle nests in the U.S. Coastal towns regulated the use of artificial lighting that confused sea turtles. Organizations and volunteers have provided relentless support outside of regulatory programs.

The results have been staggering. There were 3,950 loggerhead turtle nests in Georgia in 2019. These are record numbers and roughly triple the average nest count over the last three decades. The return of loggerheads is impressive, but the green turtle revival is even more mind-blowing. There were fewer than 300 nests in 1989 at 27 of the main beaches in Florida where the animals come to lay eggs. In 2019, that number reached 41,000.

As sea turtle numbers have swelled once again, a byproduct of that rebound is the restoration of dune ecosystems.

The salty winds, unpredictable storms and porous sands of coastal dune ecosystems make them fairly desolate places. When sea turtles lay their ping-pong ball–sized eggs, they unwittingly transfer energy and nutrients to plant life, regardless of how many eggs actually hatch. Each embryo is immersed in nutritious fluids and encased in a leathery calcareous shell. The developing young will absorb much of the nutrients, but dune plants welcome the bits of calcium left behind. Those eggs that fail to develop or hatch will provide even more of a supplement. With a protein shake of shell fragments and decomposing hatchlings, dune grasses stretch their root systems into ever-shifting sands. The result is a more stable dune system. Healthy dunes are nature’s first defense against the rising seas and stronger storms that are expected from climate change.

Sea turtles along the Atlantic coast of the U.S. have rebounded from near extinction with the help of novel conservation strategies that addressed unexpected threats. Simple adjustments in human behavior—such as installing outdoor light fixtures with shields to direct light downward—led to tangible benefits to sea turtles. Similar strategies could be applied to protect birds during their migrations above our overly lighted cities, streets and porches. Similarly, after decades of death in trawl gear, conservationists and fishermen came together to design nets that allowed turtles to escape without jeopardizing the prized catch of shrimp.

The survival of sea turtle populations depends on our continued vigilance. Rising seas and temperatures present novel threats to these prehistoric reptiles. We will have to work to protect their future nesting grounds, which may be farther inland and at more northerly beaches. As we prepare for the repercussions of climate change, it’s imperative that we give space for wildlife to migrate to suitable habitats. One such strategy involves protecting land in connected corridors that represent a variety of physical habitat and temperature gradients. In other words, our best bet is on diversity—not just of species, but of places.

Life in the midst of the sixth mass extinction is exhausting. Tie in political and social upheavals, and one struggles to find reason to get out of bed. Like a clutch of turtle eggs on a desolate beach, we get buried in it all. But oxygen filters through grains of sand, and there is life yet. Despite high tides and tropical storms, hatchlings manage to emerge. So must we. Their persistence, both as a species and as individuals, gives us hope for life in a changing world. The complex relationships between egg fragments and dune grasses gives us inspiration and grounds us. Perhaps we may be inspired to action and grounded in humility.