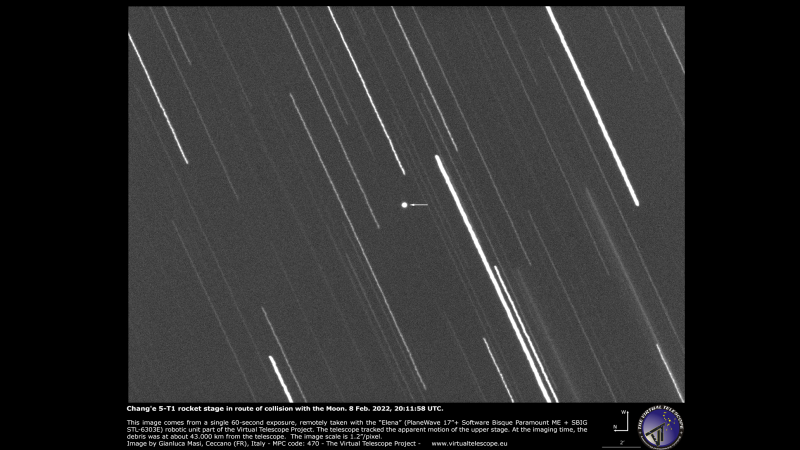 A Virtual Telescope Project image shows a rogue rocket stage on the road to oblivion, nearly a month before it smashed into the the moon on Friday (March 4).

The image was taken Feb. 8 during the stage’s last close flyby of Earth, when it was visible in the 17-inch (43 centimeters) Planewave telescope stationed near Rome. At the time, Virtual Telescope Project founder Gianluca Masi said in an image caption, the rocket was roughly 2,500 miles (4,000 kilometers) from Earth.

The 60-second exposure shows the stage during its last weeks before it crashed into the moon. The impact occurred on Friday at 7:25 a.m. EST (1225 GMT) on the lunar far side, experts say, meaning it was out of view of ground-based telescopes.

Lunar mystery: Who launched the rocket that will slam into the moon?
More: The greatest moon crashes of all time

Masi identified the moon impactor as a part of the Long March 3C rocket that launched China’s Chang’e 5-T1 mission in 2014, a conclusion also reached by several other experts in recent weeks. (Chang’e 5-T1 was a technology demonstrator of the more well-known Chang’e 5 mission, which brought a sample of the moon back to Earth in December 2020.)

The first known prediction of the moon impact came from astronomer Bill Gray, who tracks faraway space objects through the Pluto Project. Initial calculations by Gray and other astronomers suggested the impactor was the upper stage of the SpaceX Falcon 9 rocket that launched the Deep Space Climate Observatory (DSCOVR) satellite in February 2015.

However, Gray later revised his analysis. His work, and that of other observers, suggests that the object was instead a piece of the Chang’e 5-T1 launcher. Chinese space officials have disputed this finding, however.

Officials with the U.S. Space Force at first seemed to agree with China’s assertion,  indicating that the Chang’e 5-T1 stage burned up in Earth’s atmosphere back in 2015. But the Space Force recently confirmed to SpaceNews that the rocket body did not deorbit back then after all; its presumed reentry was an extrapolation, not an observation, which Gray had already suggested was the likely scenario.

While the origin story remains under dispute, what is more well-established is that NASA’s Lunar Reconnaissance Orbiter (LRO) plans to seek out the crater. That process, however, will likely take weeks or month. LRO was out of range of the initial impact, and it will take some time to analyze the probe’s images.

Today’s impact was the first known unintentional lunar collision involving a piece of space hardware. This doesn’t count the various spacecraft that have crashed during lunar landing attempts or the rocket bodies that were deliberately crashed, such as the third stages of Saturn V moon rockets that NASA steered into the lunar surface on multiple Apollo missions.