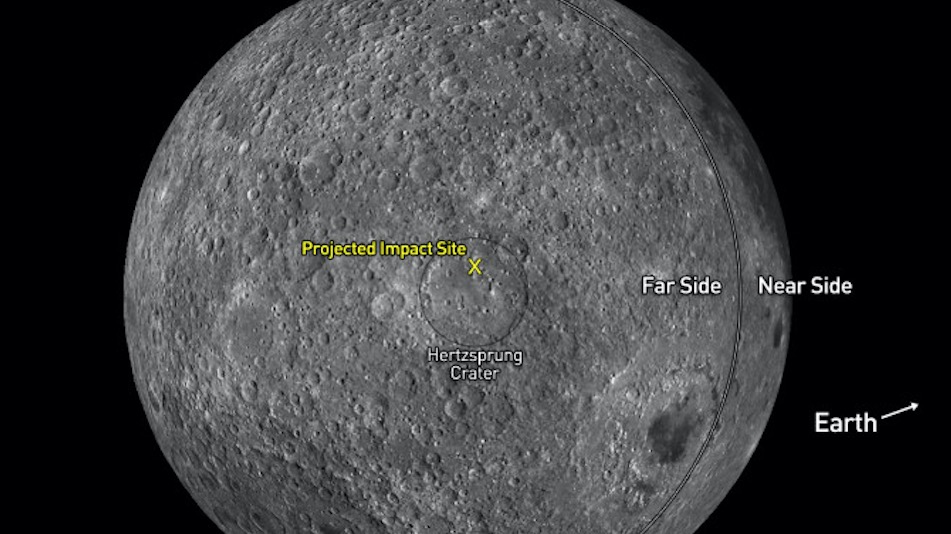 A rogue rocket stage is on its way to oblivion Friday (March 4), bound for an unintentional crash into the moon.

The event will take place at 7:25 a.m. EST (1225 GMT) on the lunar far side, meaning it will be out of view of ground-based telescopes. Even NASA’s Lunar Reconnaissance Orbiter will not get a look at the crash, but the agency has pledged to seek out the resulting crater — a process that could take weeks or months.

That crater, Scientific American suggests, will be somewhat near the naturally formed 354-mile-wide (570 kilometers) Hertzsprung Crater.

The collision will mark the first known unintentional lunar collision involving a piece of space hardware, not counting the probes that have crashed while trying to land on the moon. (NASA steered the third stages of Saturn V moon rockets into the lunar surface during multiple Apollo missions, but those crashes were intentional.)

Lunar mystery: Who launched the rocket that will slam into the moon?
More: The greatest moon crashes of all time

If you spot the rocket stage in a telescope before it hits the moon, let us know! Send images and comments in to spacephotos@space.com.

Where exactly the errant rocket stage came from is a matter of some debate. Initial analyses pointed to a SpaceX Falcon 9 rocket, though later looks identified a Chinese launcher as the origin. China has disputed this conclusion, however, illustrating how hard it is to track small objects far from Earth.

The first known prediction of the coming moon impact came from astronomer Bill Gray, who runs the Pluto Project program that tracks faraway space objects. Initial calculations by Gray and others suggested that the object is the upper stage of the SpaceX Falcon 9 rocket that launched the Deep Space Climate Observatory (DSCOVR) satellite in February 2015.

However, Gray later corrected his analysis after discussion with other astronomers, including Jonathan McDowell, a Harvard-Smithsonian Center for Astrophysics astronomer who commonly tracks satellites and space debris. Gray’s work and several other independent observations now suggest that the object is in fact part of the Long March 3C rocket that launched China’s Chang’e 5-T1 mission mission in 2014.

Chang’e-5-T1 was a technology demonstrator of the more well-known Chang’e 5 mission, which brought a sample of the moon back to Earth in December 2020. China denies that the moon-bound stage is from their country, an assertion that was initially backed up by United States Space Force data, which suggested the object had reentered Earth’s atmosphere in 2015. But Space Force officials recently confirmed to SpaceNews that the Chang’e 5-T1 stage did not deorbit after all; the supposed reentry was an extrapolation, not true tracking data, a scenario that Gray had suggested was the case.

So it’s a complicated story, one that could unspool further over time. Scientific discoveries could be part of that story; astronomers are eager to find and study the new crater, to learn more about the near-surface composition and structure of the mysterious lunar far side.