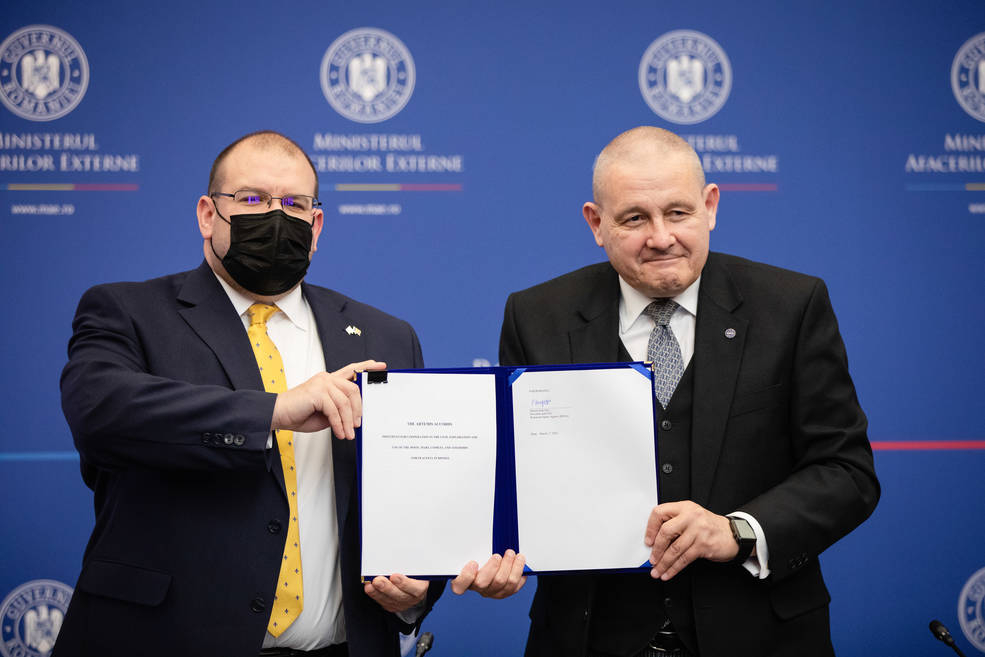 The country of Romania has signed the Artemis Accords, becoming the 16th nation to join the NASA-led project for cooperation in space.

Romanian Space Agency President and CEO Marius-Ioan Piso signed the accords for peaceful exploration of the moon and space on Tuesday (March 1) during a virtual ceremony at the country’s Ministry of Foreign Affairs in Bucharest. NASA Administrator Bill Nelson attended virtually, though the U.S. Chargé d’affaires to Romania David Muniz was on hand for the event.

“Now more than ever, it is important that we work together across international boundaries to strengthen partnerships and ensure the use of outer space for peaceful purposes,” Nelson said in a statement. “Having Romania join the Artemis Accords is an important step toward achieving this goal.”

The Artemis Accords are a set of principles that outline the peaceful and responsible exploration of the moon and beyond as NASA’s Artemis program aims to return astronauts to moon later this decade. Piso said Romania’s signing of the accords is a way to inspire a new generation of scientists and explorers for the country and the world.

“This spirit of collaboration was a main impetus for us to join the Artemis Moon exploration endeavor,” Piso said in the March 1 statement. “Among the clear benefits that emerge from the participation in this unique program, we see Artemis also as an attractor for the younger generation towards science, discovery, innovation — things that robots still cannot do. It is also a good way to move the focus from conflicts between humans to challenges in discovery, exploration, and defense of our planet.”

NASA and the U.S. State Department unveiled the Artemis Accords in 2020 with eight nations signing on at the start: Australia, Canada, Japan, Luxembourg, Italy, the United Kingdom, the United Arab Emirates and the United States. Since then, eight more countries have signed on as they plan ways to contribute to lunar exploration. In addition to Romania, the other signatory countries include Ukraine, South Korea, New Zealand, Brazil, Poland, Mexico and Israel.

NASA said more countries are expected to join the Artemis Accords “in the months and years ahead, as NASA continues to work with its international partners to establish a safe, peaceful, and prosperous future in space.”

NASA’s Artemis program aims to return astronauts to the moon by around 2025 or so to establish a sustain human presence on Earth’s nearest neighbor. The program includes plans for a Gateway lunar station in orbit around the moon and a crewed landing near the lunar south pole, where signs of water ice have been found in the permanent shadows of craters.

NASA’s first Artemis mission, called Artemis 1, is slated to launch in May or June of this year and will be use the agency’s first Space Launch System megarocket to send an Orion space capsule around the moon. A crewed lunar orbit mission, Artemis 2, will follow that flight, culminating in the Artemis 3 crewed landing, NASA has said.