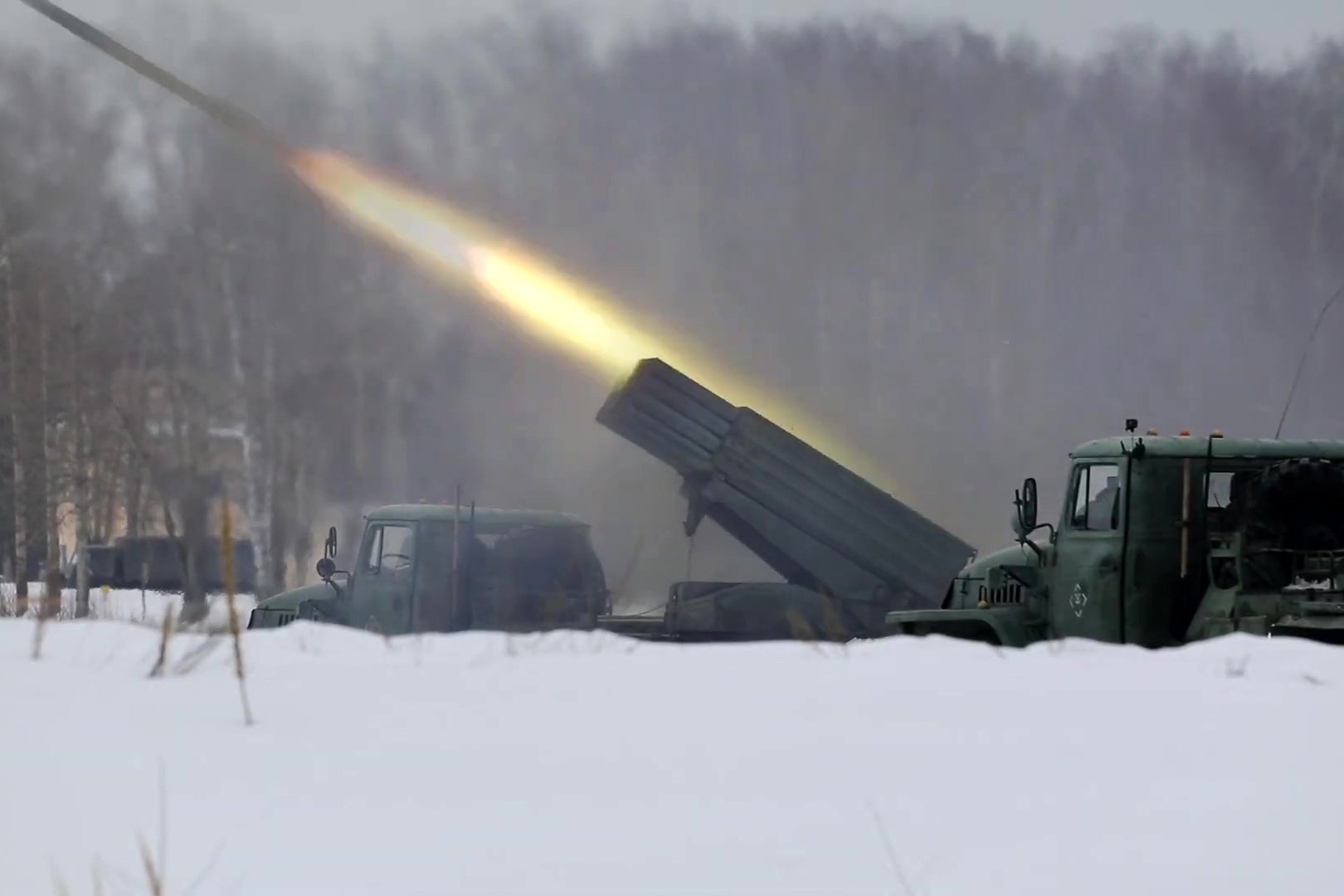 When Russia annexed Crimea and meddled in Ukraine’s Donets Basin, or Donbas, region in 2014, its military revealed new technology, organization and tactics—and upended much of the U.S. military’s thinking about modern warfare. Now, as Moscow keeps U.S. and European leaders guessing about whether it will invade Ukraine again, the Pentagon is pushing forward with projects that reflect priorities set after the onset of the ongoing Russia-Ukraine conflict.

Technologies currently in development include futuristic-sounding projects such as swarms of autonomous drones and a supercannon that can fire a projectile to a distance of 1,000 miles. And perhaps the most staggeringly ambitious campaign aims to combine existing radar and communications with state-of-the-art cloud computing and artificial intelligence in order to create an automated system that coordinates operations across multiple combat areas.

Many of these efforts can be traced back to a U.S. Army study of Russia’s 2014 invasion of Ukraine. During that incursion, Russia displayed an ability to expand the traditional battlefield through the use of cyberspace, electronic warfare and information weapons. The study determined that, in a future fight, Russia’s new capabilities could be paired with robotic weapons and long-range strikes involving high-precision missiles, including air- and space-launched attacks. The net effect, the report concluded, would leave the U.S. outmatched in several key areas, including armor, artillery, air defense, space and cyberspace. Catching up, the authors wrote, would require the U.S. to adapt to “new realities of the modern battlefield” or face defeat in a conventional fight—which could risk the cohesion of the NATO alliance and raise the possibility of nuclear conflict.

“We are at an inflection point, and we have strategic competitors that are out there that have large militaries,” says General James McConville, chief of staff of the U.S. Army. He notes that the U.S. military has focused on counterterror operations in Afghanistan and Iraq. But a potential fight against Russia—or China, which the Pentagon now regards as the U.S. military’s preeminent threat—would require it to shift focus to a different set of technologies. “In order to deter strategic competitors,” McConville says, “we need to be able to do large-scale combat operations.”

Last November Army Futures Command hosted a large-scale modernization experiment called Project Convergence 21. The event, held in Arizona, served as a showcase for more than 100 novel technologies, all aimed at advancing a new idea about how to fight that was born in the wake of Russia’s 2014 operations: Joint All-Domain Command and Control (JADC2).

This technology project would quickly coordinate combat across multiple fronts. Much like the way a ride-sharing app combines data on location, distance and travel time to determine the best match for a specific driver and passenger, JADC2 aims to pool all U.S. military intelligence, surveillance and reconnaissance in a data cloud and to use artificial intelligence and algorithms to match the best weapon against a given target. This coordination would ideally integrate the Army, Navy, Air Force and Marines into a single fighting force, within which any sensor could connect with any shooter. For instance, if the radar equipment on an F-16 fighter jet spotted an enemy target, and JADC2 determined that a submarine was best positioned to take the shot with a land-attack cruise missile, then that calculus—which might currently take hours or days to coordinate across the air and maritime domains—could be executed in near real time.

“This spring’s prospect of a major Russian attack on Ukraine may give us a case study of what high-end, multidomain attack looks like,” says Melanie Marlowe, a nonresident senior fellow at the Center for Strategic and International Studies. “The combination of [uncrewed aerial vehicles], missiles, electronic attack and various ground forces will be a huge challenge.” The idea is that a capability such as JADC2 could tackle that challenge by helping U.S. forces and their allies simultaneously stage attacks across multiple domains, including land, maritime, air, space, cyberspace and electronic warfare. This would hopefully present a closely matched adversary, such as Russia or China, with new dilemmas at a pace it cannot match. “What we look for is speed, range and convergence in our systems so we will have overmatch,” McConville says, using a Pentagon term for dominance. “We are looking for an edge, looking for an advantage, and we’re doing it working together … as a combined force with allies and partners.”

Earlier this month the Pentagon unveiled new priorities that aim to drive innovation in 14 “critical technology” areas. Among the key fields are artificial intelligence and autonomy because science and research in such categories are needed to support weapon systems for fighting over well-defended territory: swarms of drones.

In order to penetrate highly defended and contested environments, such as those the U.S. military would face if fighting China or Russia, Washington, D.C., would need a specific set of technologies, says Heidi Shyu, U.S. undersecretary of defense for research and engineering. Shyu says that when Secretary of Defense Lloyd Austin asked her, in an initial meeting last year, what those technologies would be, she responded, “Make sure that we penetrate with attritable, low-cost unmanned systems.” (Attritable systems are designed to have a limited life: these drone swarms would be deployed with the assumption that they would not return.) “To be able to do that, I believe that we need trusted AI and trusted autonomy to be able to operate without GPS,” Shyu explains. She says she wants to combine artificial intelligence and engineering in order to automate fleets of robotic aircraft, ground vehicles, and both surface and underwater marine vessels. If all these can perform tasks with limited human intervention, even in an environment where satellite navigation tools no longer work, then they can carry out missions such as intelligence, surveillance and reconnaissance, and target attack.

Shyu’s new efforts will build on existing commercial and U.S. military work in this area. For instance, the Pentagon has already demonstrated the ability to deploy 3-D-printed swarming micro drones from planes. This would help fighter pilots avoid taking the risk of loitering over hostile territory.

In early January the U.S. Army disclosed plans to test-fire a prototype supercannon as soon as 2024. This “long-range cannon” is envisioned to be able to strike targets 1,000 miles away, a range that would utterly dwarf the 25-mile reach of today’s artillery.

One of the key lessons from Russia’s 2014 invasion of Ukraine was a need for the U.S. Army to extend its long-range strike systems. Now the Army is on track to field a number of new long-range missiles by 2023. The long-range cannon is not yet part of the weapons roster. It is what senior leaders call a “big bet” in their science and technology plan because it shows promise but still must prove its maturity before it is built for real-world missions. The idea is that this weapon would be used in tandem with the Army’s new Long-Range Hypersonic Weapon, a truck-launched system that fires missiles at hypersonic speeds. This combination could punch through dense, sophisticated enemy air defenses and create an opening for U.S. military forces to break through. Even on its own, the cannon would be a much cheaper alternative to the estimated $106-million-per-shot tab of the Long-Range Hypersonic Weapon.

In 2020 Congress, curious about the practicality of what lawmakers have called an “imaginative concept,” directed the National Academies of Sciences, Engineering, and Medicine to conduct an independent review of the cannon project and report on its feasibility. That study’s findings have not yet been published, but the panel has briefed Army leaders—and key service officials say they are optimistic. “The expert bodies that we’ve had look at it come away saying, ‘Yeah, you can do this,’” says Brigadier General John Rafferty, Army Futures Command’s director of developing new long-range missiles and cannons. “There are certainly challenges associated with it…. But it’s about the only investment that’s looking at doing anything like this mission in a more affordable way.”