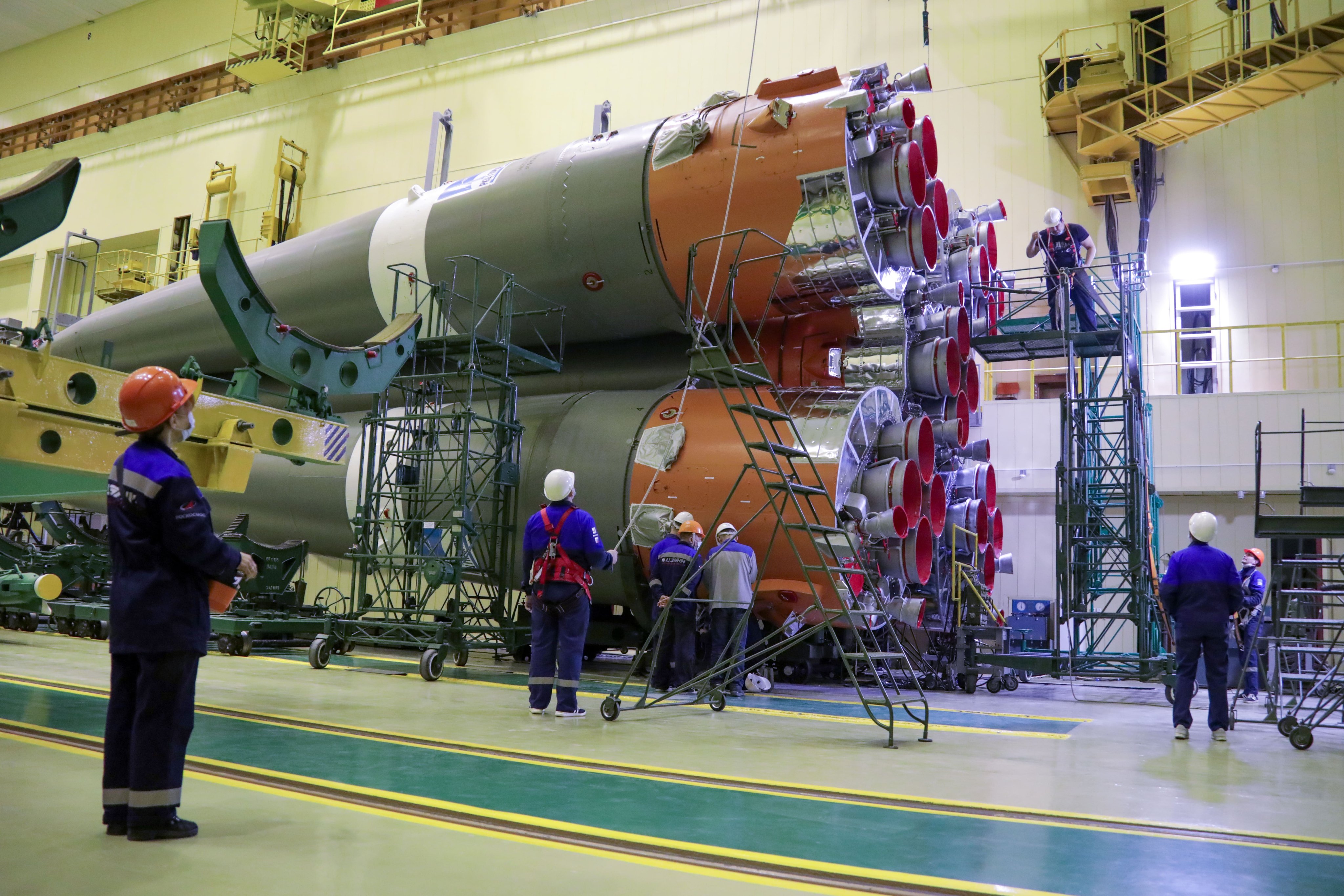 Three dozen private broadband satellites are scheduled to launch atop a Russian rocket on Friday (March 4), and not everyone is happy about the situation.

Russia’s federal space agency, Roscosmos, has cleared a Soyuz rocket topped with 36 OneWeb internet satellites to roll out to its launch pad at Baikonur Cosmodrome in Kazakhstan tomorrow (March 2), according to a Twitter update today.

The rollout will keep the Soyuz on track for its planned launch on Friday at 5:41 p.m. EST (2241 GMT; 3:41 a.m. on March 6 local time in Baikonur). Some folks are questioning whether the liftoff should proceed, however, given Russia’s ongoing invasion of Ukraine.

One of those people is United Kingdom Member of Parliament Darren Jones, the chair of the House of Commons’ Business, Energy and Industrial Strategy Committee. Jones sent a letter today to George Freeman, the UK’s Minister for Science, Research and Innovation, asking whether Freeman’s department “considers this situation inappropriate given the current situation.”

The letter, which Jones shared via Twitter, notes that the UK government helped buy London-based OneWeb out of bankruptcy and therefore has a say in the company’s affairs. Jones asks Freeman if his department “intends to intervene in this situation by engaging with the OneWeb board in its capacity as a major shareholder” and also raises the prospect of helping OneWeb find alternative launch providers.

OneWeb is building an internet constellation that will feature 648 satellites. The company has already launched more than 420 spacecraft, the vast majority of them atop Soyuz rockets that flew from Vostochny Cosmodrome in Russia or Baikonur. The most recent OneWeb mission, on Feb. 10, sent 34 satellites to orbit from Europe’s Spaceport in French Guiana atop a Soyuz operated by French company Arianespace. Last week, Roscosmos announced that it would suspend Soyuz launches from French Guiana with Arianespace.

The additional satellites that will fill out the initial constellation are all scheduled to launch on Soyuz vehicles from Baikonur this year, as the BBC noted.

A number of high-profile companies have severed or reduced their ties with Russian government enterprises as a result of the invasion of Ukraine. For example, British Petroleum and Dutch oil giant Shell recently announced that they’re pulling out of partnerships with Russian state-owned energy outfits Rosneft and Gazprom, respectively.

But it’s unclear if scuttling its deal with Roscosmos is the right way for OneWeb to go, said astronomer and satellite tracker Jonathan McDowell, who’s based at the Harvard-Smithsonian Center for Astrophysics.

“From a source, good point about the upcoming OneWeb launch: it’s actually better from a *tech transfer concerns* (ITAR etc) point of view to launch the sats than to try and get them back out of Russian hands. And no further money will change hands. Seems a reasonable way to go,” McDowell said via Twitter on Monday (Feb. 28). (ITAR is short for “International Traffic in Arms Regulations,” a set of U.S. rules designed to keep defense-related technologies out of the hands of adversary nations.)

And OneWeb has given no indication that Friday’s launch won’t happen as planned. “The company itself has made few public utterances on the topic,” the BBC wrote.