A new type of weather condition has been observed, existing primarily in one particular part of the world: compact, slow-moving, moisture-rich pools. Researchers are calling these ‘atmospheric lakes’.

This unique type of storm occurs over the western Indian Ocean and moves towards Africa. Unlike most storms – created by a vortex – the lakes are produced by water vapor concentrations that are dense enough to produce rain.

These atmospheric lakes are similar to atmospheric rivers, narrow bands of dense moisture. However, the new type of meteorological phenomenon is smaller, slower moving, and detaches itself from the weather system that creates it. 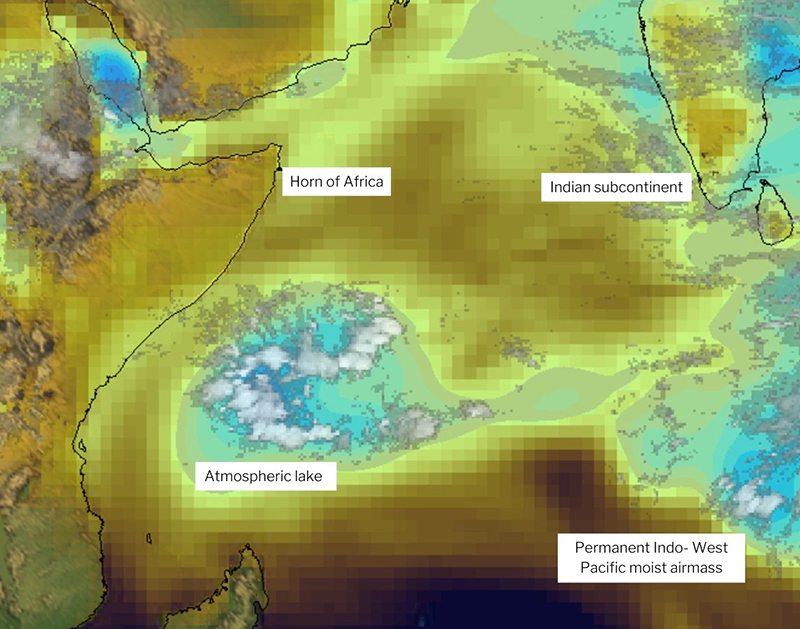 “These vapor bodies sometimes drift west over the east African coast, bringing rain to that semi-arid area,” explains an abstract on the research, presented at the 2021 Fall Meeting of the American Geophysical Union.

“By contrast to rain-bearing ‘atmospheric rivers’ of vapor, which are contiguous from source to coastline at an instant, we call these disconnected and drifting water bodies ‘atmospheric lakes’.”

Existing as they do in an equatorial region where the wind speed is often very low or negligible, these atmospheric lakes are in no rush. In an analysis of five years of meteorological data, the longest-lasting storm stayed in the air for 27 days in total.

Over the five years, 17 atmospheric lakes lasting longer than six days were discovered, within 10 degrees of the equator. It seems that these lakes can happen in other regions too, where they sometimes turn into tropical cyclones.

A team is now being put together to run a full study on the phenomenon. One of the questions the researchers will be looking at is why atmospheric lakes detach themselves from the river-lake patterns they form from – it’s possibly due to the overall atmospheric wind patterns, or perhaps due to self-propelled winds produced internally.

“The winds that carry these things to ashore are so tantalizingly, delicately near zero [wind speed], that everything could affect them,” says one of the researchers, atmospheric scientist Brian Mapes, from the University of Miami.

“That’s when you need to know, do they self-propel, or are they driven by some very much larger-scale wind patterns that may change with climate change.”

The climate change angle is an important one, because if increasing temperatures in any way affect the formation and movement of atmospheric lakes, that could impact the rainfall that reaches the east coast of Africa – where it is sorely needed.

According to Mapes, if all the water in a year’s worth of atmospheric lakes were to be liquified at once, it would create a puddle just a few centimeters deep but a kilometer (621 miles) wide. That’s a significant amount of precipitation.

The next step is to gather more data, including more localized and detailed readings. It’s a part of the world where rain and water vapor tends to be studied month-to-month rather than day-to-day, according to Mapes, which may be why these lakes have been missed until this point.

“I look forward to learning more local knowledge about them, in this area with a venerable and fascinating nautical history where observant sailors coined the word monsoon for wind patterns, and surely noticed these occasional rainstorms, too.”

The research was presented at the 2021 Fall Meeting of the American Geophysical Union.