Goffin’s cockatoos have edged parrots closer to corvids in the battle of the brainiest birds, by revealing their extraordinary ability to use composite tools.

Using more than one tool simultaneously played a huge role in humanity’s technological development, but it’s a skill that’s rarely been observed in other animals. Chimps are a rare example, using a hammer and anvil to crack nuts.

Goffin’s cockatoos (Cacatua goffiniana), known for their innovative ability to create novel tools and craft cutlery, have just provided the first example of composite tool use outside of primates.

First author biologist Antonio Osuna-Mascaró from the University of Veterinary Medicine in Vienna and colleagues designed an experiment they called the Golf Club Task. It’s a puzzle box with a green carpeted floor that requires a ball to be inserted then putted along with a stick into a hole, to trigger the release of a reward. 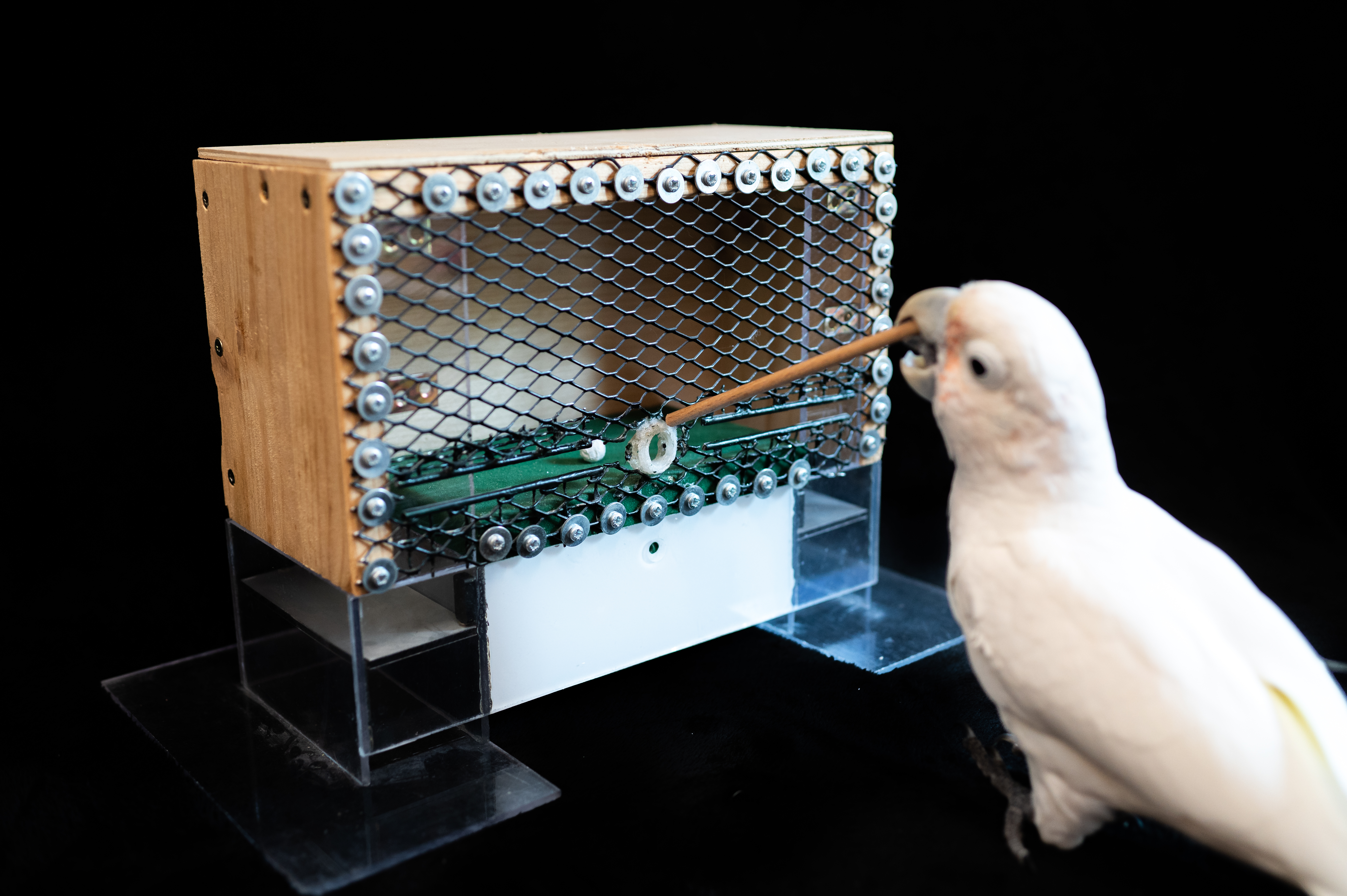 This proved easy for some of the bird brains in the experiment. Out of 11 cockatoos, 5 were able to solve the task – all drastically reducing their trial time suddenly once they understood.

“This suggests that the birds were able to immediately identify and memorize the necessary steps upon their initial success,” the researchers explained in their paper, “a pattern that is inconsistent with typical associative learning progressions yet strongly consistent with previous Goffin problem solving performances.”

What’s more, the three cockatoos that worked out the task within the trial criteria (Figaro, Pipin, and Fini) all used different techniques.

Why are these 3 styles important? Because the way these cockatoos use tools is much more similar to ours than that of the New Caledonian crows

Here you can see Figaro and Fini solving it, each with their own peculiar and particular style. pic.twitter.com/VUk6ksXW28

“One of the most amazing aspects of the process was to observe how these animals each invented their own individual technique in how to grip the stick and hit the ball, sometimes with astonishing dexterity,” said Osuna-Mascaró. “One of the birds operated the stick while holding it between the mandibles, one between the beak tip and tongue and one with his claw, similar to a primate.”

Extra: Pipin’s technique (previously left out because of a limit on Twitter videos).

Pipin is unique in the group (he is a former alpha, but he is one of those charismatic alphas that F. de Waal tells us about in his talks), he inserts tools using his legs pic.twitter.com/SjbXADAhA7

This non-stereotyped tool use indicates spontaneous innovation and more general cognitive processing, instead of inherited behaviors the team suggests.

It is similar to what’s seen in chimpanzees, who use individual techniques to fish for termites.

Even human children under 8 struggle to invent new solutions to such tasks, despite their impressive ability to use technologies like iPads.

“While this study is the first to show that cockatoos can coordinate tools to solve a problem, it also feeds into our ongoing work with children,” said University of Birmingham developmental psychologist Sarah Beck.

“Comparing such different species helps us understand how humans and some other species develop impressive technological skills.”

Just as golf challenges our own ability to aim, this task demonstrates that the birds understand how to aim too. They changed their movements to adjust the position of the stick, aiming at the correct platform above the number of times that they would have it were only up to chance.

Not all the birds worked out the puzzle box during the first experiment. A follow-up hinted that the cockatoos may be able to learn this tool use through observation. After watching a more advanced peer complete the task, some did engage more with the puzzle box but did not entirely imitate their demonstrators methods.

“This parallels previous findings suggesting that Goffin’s learned by emulation, not imitation,” the authors concluded.

Some of the other cockatoos, however, got frustrated and threw a little bit of a tantrum at the box, damaging it instead.

“This could be explained by the frustration caused by viewing a task being solved by another individual, but we also cannot rule out the similarly frustrating effect of accumulating unsuccessful sessions,” Osuna-Mascaró and team wrote.

Another of the feathered rascals, Figaro, even found a devious workaround by levering the box up with the stick then dropping it – the thump causing the trigger to release the treat.

What a clever cocky!

This research was published in Scientific Reports.