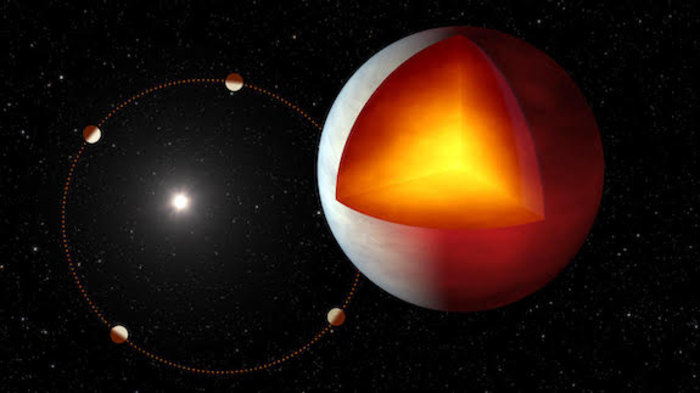 Scientists got a close look at an extreme case of seasons thanks to a retired NASA telescope.

Researchers used NASA’s Spitzer Space Telescope to film a year on an exoplanet called XO-3b. Conveniently, a year on this world lasts only three Earth days. Within that time, the exoplanet experiences a one-day-long summer and a two-day-long winter — and while the seasons pass fast, they’re also awfully dramatic.

“We saw seasonal temperature variations hundreds of times stronger than what we experience on Earth,” Lisa Dang, a Ph.D. candidate in astrophysics at McGill University in Canada, said during a news conference held by the American Astronomical Society on Thursday (Jan. 13). The research was due to be presented at a meeting that the organization cancelled due to COVID-19.

“These are not the same seasons that we experience on Earth,”  Dang said.

Finding a large planet orbiting so close to its star but in an ellipse is unusual. Because the star and planet are large and close together, their gravitational interactions tend to pull the most distant part of the planet’s orbit closer and closer to the star, resulting in a circular orbit. So scientists think that XO-3b hasn’t been orbiting its star very long, astronomically speaking.

“The oval shape that we see here on this very short-period planet suggests that we’re catching it in the middle of migrating,” Dang said.

But this strange orbit isn’t the only surprising characteristic Dang and her colleagues found. NASA’s Spitzer Space Telescope specialized in detecting infrared light, which also manifests as heat. And when Spitzer looked at XO-3b, it saw stronger infrared signatures — and therefore a hotter planet — than the scientists expected.

And when the researchers took a closer look, they realized that even the planet’s wild seasons couldn’t explain the unexpected heat.

“This extra heating that we saw with Spitzer isn’t seasonal, it’s seen throughout the year,” Dang said. “Our investigation of this hot Jupiter finds that it’s heated not only by the nearby planet star, but it’s also heated from the interior of the planet.”

Additional observations gathered by the European Space Agency mission Gaia suggest that the planet is “puffier” than expected, as well, a characteristic that might be connected to the surprising heat.

Dang and her colleagues have two theories on how the planet may be generating the excess heat. One possibility is tidal heating: As the planet orbits, the star’s gravity tugs it from different angles, stretching and deforming the planet.

The other possible explanation is that the planet isn’t actually a planet at all. Instead, Dang and her co-authors argue that it could be a star, with a pile of hydrogen at its core fusing just like it does inside our sun. If this is the case, XO-3b would be a brown dwarf, a class of bodies often nicknamed “failed stars.”

“XO-3b might not be a regular planet, but it might be not necessarily a failed star yet, but at the peak of its lifetime as a star,” Dang said.

The research is described in a paper published Dec. 22 in The Astronomical Journal.