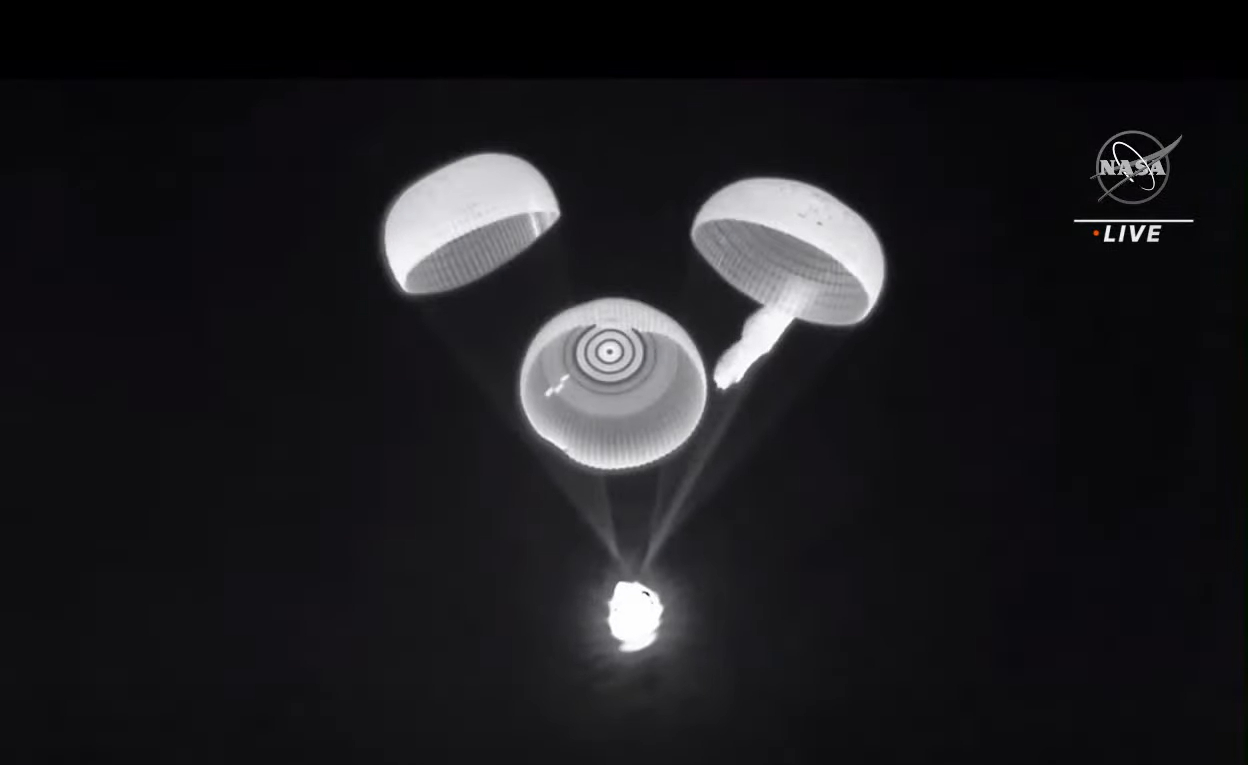 The parachute system on SpaceX’s Dragon capsule hasn’t behaved exactly as expected recently, and NASA and SpaceX want to know why.

The Dragon named Endeavour returned to Earth with four astronauts on Nov. 8, 2021, wrapping up SpaceX’s Crew-2 mission to the International Space Station for NASA. During its descent that day, one of Endeavour’s four main parachutes didn’t open on schedule, lagging about 75 seconds behind the others.

The same thing happened on the next Dragon reentry, the Jan. 24 return of the capsule that made the CRS-24 (Commercial Resupply Services-24) robotic cargo run to the orbiting lab for NASA. That time, the lagging chute opened about 63 seconds behind its brethren, agency officials said during a call with reporters on Friday (Feb. 4).

In Photos: SpaceX’s Crew-2 mission to the International Space Station

The parachute lag didn’t affect mission success in either case; both Dragons splashed down safely. But NASA and SpaceX are looking into the issue, to make sure it’s fully understood in advance of other crewed Dragon flights.

“This is a super chance for us to learn,” Bill Gerstenmaier, vice president of build and flight reliability at SpaceX, said during Friday’s telecon.

Having two sets of such similar data is “almost a gift,” he added, stressing that the investigation will boost engineers’ understanding of Dragon’s parachutes and end up making the system safer and more robust.

The investigation, which was first reported by SpaceNews, will involve detailed analysis of imagery captured during the CRS-24 reentry, to see if anything anomalous occurred during chute deployment, Gerstenmaier said. SpaceX and NASA technicians will also examine the CRS-24 chutes in detail, looking for anything odd or out of place, as they did with the Crew-2 chutes.

“This will be thoroughly investigated, very similar to what we did in a pretty expedited manner after Crew-2,” Gerstenmaier said. “We’ll use this as another data point and see if we can actually get smarter about how these systems operate so we can make sure that, yes, this really is a nominal operation of this four-chute system.”

That’s the leading theory at the moment — that it’s normal for one of the four chutes to take longer than the others to fully inflate. The lagger may commonly get “shadowed” by the other three, failing to open fully until Dragon gets lower in Earth’s atmosphere, where the air is denser and can therefore provide the requisite expanding load.

“We think this is just a feature of the way the four-chute design works,” Gerstenmaier said.

The fourth chute probably isn’t even necessary, strictly speaking; Dragon can land safely with just three of its main parachutes functioning properly, NASA Commercial Crew Program Manager Steve Stich said in Friday’s telecon. Indeed, the CRS-24 Dragon’s descent rate was pretty much the same as that of other Dragons that came back to Earth with four main chutes that all inflated on time, Gerstenmaier said.

The parachute issue therefore does not present safety concerns, he added.

“This is more of a learning exercise of how we can improve our design and engineering understanding of parachute operation,” Gerstenmaier said.

A crew-carrying Dragon is currently docked at the International Space Station. That capsule will return the four astronauts of the Crew-3 mission to Earth in late April. (Nothing could be done to modify that vehicle’s chute system right now, even if SpaceX wanted to, which it does not, Gerstenmaier said.)

And two more crewed Dragon launches to the orbiting lab are coming up this spring: Axiom Space’s Ax-1 mission is currently targeted for March 30, and the Crew-4 flight for NASA will launch in mid-April, if all goes according to plan.