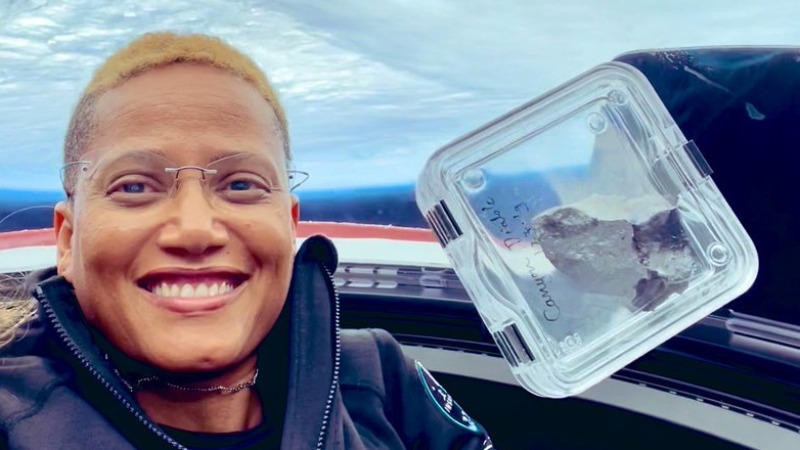 After spending 50,000 years on Earth, a meteorite got the chance to visit space again for almost three days, during the all-civilian Inspiration4 mission in September.

“This is the first meteorite brought back to space,” Proctor said in the tweet, which showed the meteorite backdropped by a 360-degree cupola viewing window that took the place of SpaceX’s traditional Crew Dragon docking mechanism. (Since Inspiration4 did not visit the International Space Station, it didn’t need the mechanism.)

A collaboration with Arizona State University allowed Proctor, a graduate of the institution, to fly the 4.4 ounce (127 gram) fragment to space. Over 30 metric tons of material have been recovered from the original impactor, according to ASU, which had a diameter of between 98 and 164 feet (30 to 50 meters.)

Proctor thanked ASU professor Meenakshi (Mini) Wadhwa, director of the university’s school of Earth and space exploration, for making the collaboration possible. Wadhwa announced the meteorite’s brief space journey in a tweet in October, adding the rock will be placed on permanent display at the school’s gallery of exploration.

I got to bring a meteorite to space with @SESEASU and @ASUMeteorites. This is the first meteorite brought back to space!! Thank you @minwadhwa for loaning me this beautiful space rock! One of the many reasons I ❤️ being a Sun Devil!! @ASU @inspiration4x #Space2inspire https://t.co/hG64ZAuhrJ pic.twitter.com/cb3eViLd5XDecember 10, 2021

Have you ever heard of a meteorite that returned to space? Thanks to @DrSianProctor for taking a space rock (#CanyonDiablo from the @ASUMeteorites collection) back to space for the first time! We will be displaying this our @SESEASU Gallery of Exploration @ASU’s Tempe campus. pic.twitter.com/597caDXf43October 15, 2021

It appears the practice for recovering rocks from space will come in handy for Wadhwa. She is also program scientist for NASA’s Mars sample return mission expected to bring back part of the Red Planet to Earth in 2031. “In this role, Wadhwa will be responsible for the scientific integrity and the overall scientific success of the program,” ASU officials wrote when she was appointed to the position in April.

A major goal of the Inspiration4 mission, besides flying four civilians to space funded by billionaire participant Jared Isaacman, was to raise $200 million for St. Jude Children’s Research Hospital in Memphis, Tennessee. The mission exceeded its fundraising goal by landing day.

As for Proctor, during the mission she emphasized her hope for space to one day align with the “JEDI” acronym, which stands for just, equitable, diverse and inclusive. Proctor, 51, was the first female Black pilot in space and the oldest Black woman astronaut.