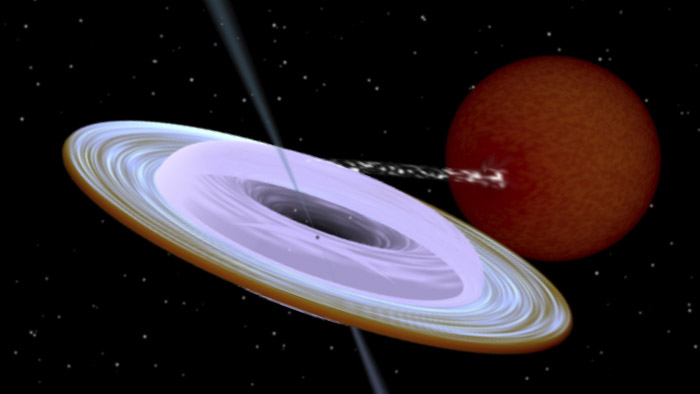 A tilted black hole spinning around a misaligned axis has been discovered in our galaxy, challenging theories of black hole formation.

The black hole and its companion star form a system called MAXI J1820+070, which lies some 10,000 light-years away from Earth. The system was first spotted by NASA’s Chandra X-ray Observatory in 2018. But recent optical observations by the Nordic Optical Telescope in the Canary Islands revealed that the black hole behaves in ways that defy astronomers’ expectations.

By studying the orientation of the jets of ionized matter emitted from the black hole’s poles,  Juri Poutanen, an astronomer at the University of Turku in Finland, discovered that the black hole spins around an axis that is tilted by at least 40 degrees toward the plane in which the block hole orbits its companion star. That’s the largest misalignment ever reported, Poutanen and his colleagues said in a statement.

Related: What happens at the center of a black hole?

“We observed black hole X-ray binary MAXI J1820+070 with a high-precision optical polarimeter,” Poutanen told Space.com in an email. “Using these data, we determined the position angle of the binary orbit on the sky. The black hole spin orientation can be obtained from the radio and X-ray observations of the relativistic jets observed previously from the system.”

By combining all of this information, the scientists were able to determine the angle between the axis of the binary orbit and the black hole spin, he added.

Theoretical models expect binary systems, such as black holes orbited by stars from which they suck material, to rotate around aligned axes that are perpendicular to their shared orbital plane.

Previously, astrophysicists expected that these axes could be only “marginally” misaligned, the scientists said in the statement.

The question remains what caused the misalignment in MAXI J1820+070. The scientists believe that, contrary to current models of black hole formation following supernova explosions, the black hole in MAXI J1820+070 must have received a “kick” during the explosion that gave rise to it.

The authors found it improbable for this misalignment to arise at a later stage, as accretion of material between two bodies of a binary system and the gravitational forces between them “always bring axes closer into alignment,” the authors said.

The finding could have wider consequences for black hole science, the scientists said, as such misalignments could bias measurements of black hole masses and spins.

The paper was published in the journal Science on Thursday (Feb. 24).