The ongoing interaction between two galaxies 320 million light-years away has been captured in a gorgeous Hubble image.

These two galaxies have drawn close enough together that they’re exchanging material. That’s not unusual: Although space is vast and mostly empty, galaxies are gravitationally drawn together, perhaps channeled along strands of the invisible cosmic web that stretches across and plays a vital role in shaping the Universe.

Interactions between galaxies significantly contribute to their evolution, whether it’s just a flyby that sees an exchange of material, or a full-on merger, as has happened multiple times over the Milky Way’s history.

These interactions can change a galaxy’s shape, or trigger shock waves that ignite star formation, effectively reviving a galaxy whose star formation rates are flagging.

We can try to understand these interactions by finding pairs or groups of galaxies that are in the throes of these processes, and conducting simulations to piece together how they occurred. That’s why images like Hubble’s latest release are so important.

There are a few notable facets of the interaction between NGC 169 and IC 1559. First, both galaxies have an active galactic nucleus; that is, the supermassive black holes at the core of each are actively gobbling down dust and gas. This process produces a lot of high-energy light in the form of X-rays, and heat in infrared wavelengths; Hubble’s image is in optical light, which dust in galactic nuclei tends to obscure.

In addition, you can clearly see streams of dust and glowing material passing between the two galaxies, likely from the lower-mass object to the higher-mass object. 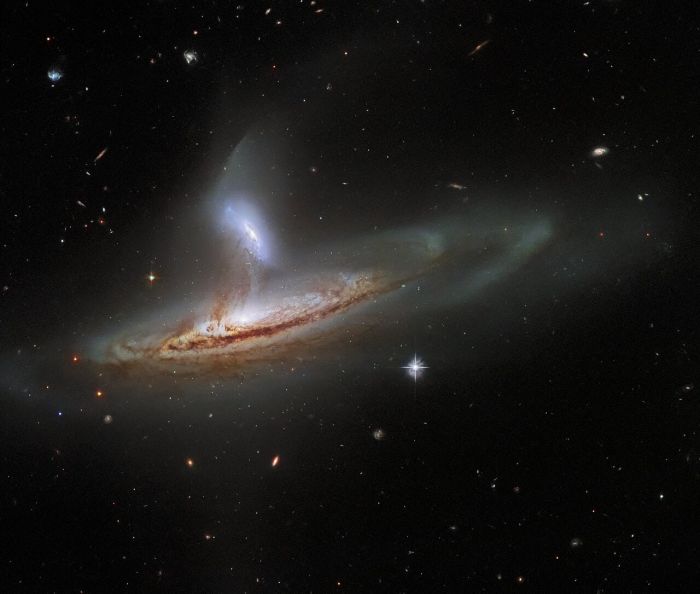 “When two galaxies interact, gas, dust and even entire solar systems will be drawn away from one galaxy towards the other by these tidal forces,” the ESA explained.

“This process can actually be seen in action in this image – delicate streams of matter have formed, visibly linking the two galaxies.”

If the two galaxies draw close enough together, eventually they’ll merge, their supermassive black holes coming together in a massive event that will send gravitational waves rippling across the Universe.

The image can be downloaded in wallpaper-sized versions from the ESA Hubble website.