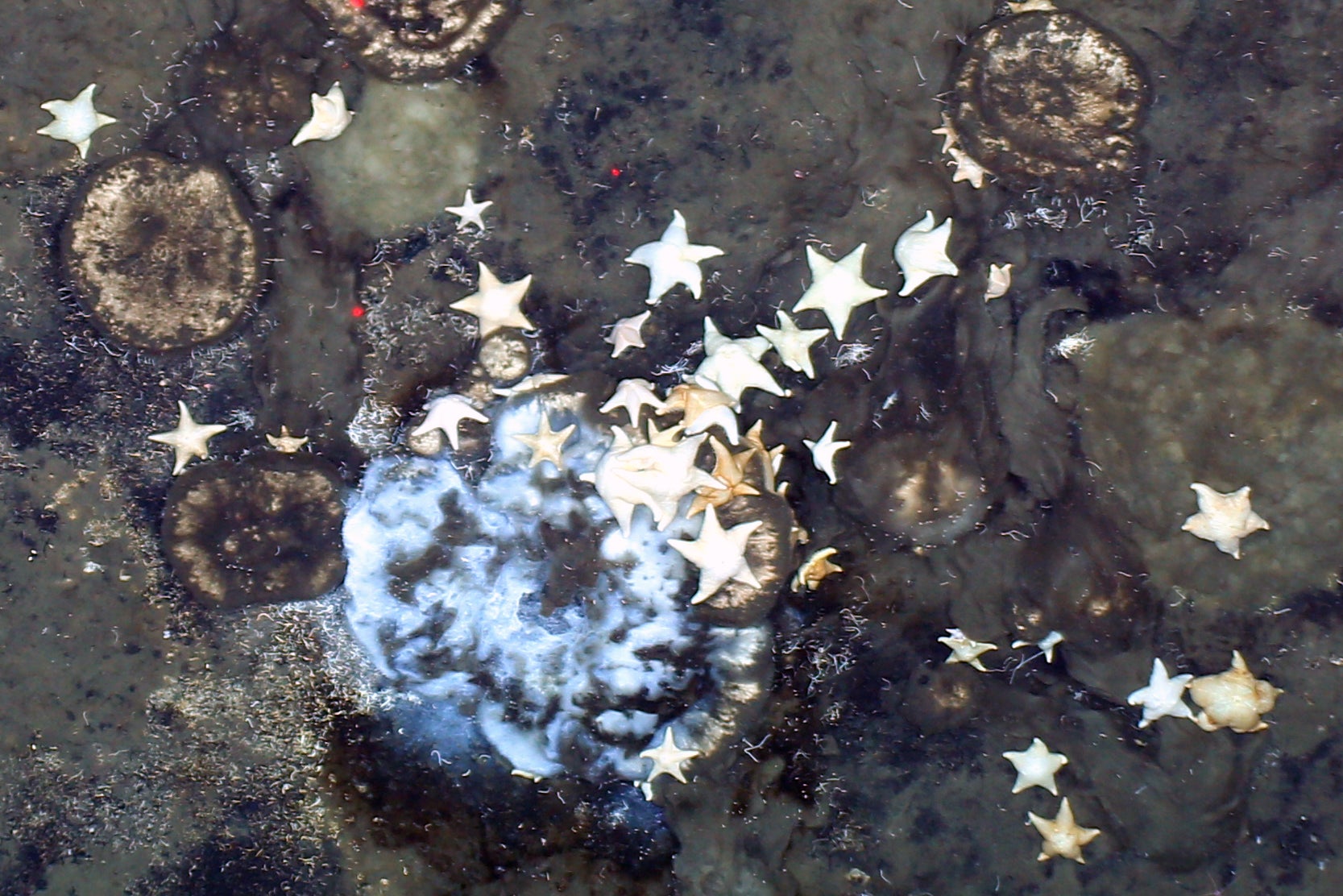 Entombed below a thick layer of sea ice year-round and nearly devoid of nutrients, the central Arctic Ocean is a frigid wasteland where few creatures are capable of surviving.

That is why researchers at Germany’s Alfred Wegener Institute (AWI) and their colleagues were so surprised to spot a thriving community of velvety deep-sea sponges below the ice in 2016. Their ice-breaking research vessel was north of Greenland just around 200 miles from the North Pole, when the submersible camera they were towing caught sight of a garden of fuzzy sponges carpeting the tops of several extinct volcanoes like mold covering a carton of raspberries. Some of them even stretched more than three feet across—giants by deep-sea sponge standards.

The existence of so many large sponges was puzzling. Sponges, which lack a digestive tract, primarily rely on passive filter feeding to gather nutrients from water flowing through them. But the ocean currents in the central Arctic Ocean are sluggish, and few particles swirl in the water. Tests of the sponges’ tissue also revealed that this colony was far from ephemeral—their average age was 300 years. That raised a question: How had these simple animals survived for centuries in a marine wasteland? “Sponges are very primitive animals,” says Teresa Morganti, a biologist at the Max Planck Institute for Marine Microbiology in Bremen, Germany. “It’s really interesting to think about how they can adapt to these extreme environmental conditions.”

To search for secrets to the sponges’ survival, the AWI researchers collected samples of the organisms and the sediment around them, which they sent to Morganti and her colleagues to examine. Their analysis revealed that the seafloor was not always barren: the sediment samples were full of fossils.

Many of the fossils were the hollow shells of large deep-sea worms that anchor themselves to the seafloor with pipelike tubes. Although no tube worms live there today, the scientists were not surprised to find their empty shells. Thousands of years ago, gases seeped from the hydrothermal vents of these submerged volcanoes, creating an ideal habitat for the worms.

That once dynamic seep ecosystem is still influencing the area long after the volcanoes sputtered out, the researchers concluded in a study published on Tuesday in Nature Communications. Samples the team collected suggest that thesponges were brimming with bacteria, including symbiotic microbes that appeared to help the animals acquire and process nutrients from the fossilized remains of their predecessors. “One community dies, and there is another organism—in this case, sponges—that colonized this area, and they use the ancient community not only as substrate but also as a food source,” Morganti says.

Heidi Meyer, a biologist studying deep-sea sponge grounds at Norway’s University of Bergen, was intrigued by the discovery that these deep-sea sponges were feeding on fossilized detritus. She believes this unprecedented feeding style opens up the possibility that there are more of these sponge oases throughout the Arctic Ocean. “I definitely believe that there are more sponge grounds that are similar to this positioned all along the [volcanic] ridge,” says Meyer, who was not involved with the new study.

Such oases would be good news for a variety of other creatures. Like coral, sponges are effective ecosystem engineers. As they grow, they create a variety of nooks and crannies for other animals to live in. The sponges also deposit a sticky, matlike surface for bacteria and detritus to settle on. According to Morganti, this acts like an “organic matter trough” that attracts other deep-sea animals. When they surveyed the Arctic sponge grounds, the researchers also discovered tiny shrimp, small worms and pudgy sea stars. Even tufts of deep-sea coral poked out from the fossil-eating sponges below.

As the resourceful sponges build on the ruins of the ancient vent ecosystem, they create new ecological opportunities, Morganti says. “These sponge grounds are hotspots of life in the desert,” she adds.