The pterosaur Quetzalcoatlus northropi is the largest known flying animal to have ever existed, living on Earth more than 67 million years ago. Now new research on the creature and its newly discovered smaller relative, Quetzalcoatlus lawsoni, gives us a better idea of how Q. northropi flew and got airborne to begin with.

Our knowledge of Q. northropi is based on hundreds of fossils discovered in modern-day Texas, and its take-off method has been a matter of some dispute: It has been suggested that it ran to build up speed like an albatross before flying, or rocked on its wingtips like a bat, or perhaps that it didn’t get up into the air at all.

The new study suggests that the pterosaur used a leap of up to 2.5 meters (a little over 8 feet) into the air, followed by flaps of its 11-meter-long (36-foot) wings, to take to the sky. It would have landed like an airplane, slowing up in the air before touching down on terra firma and taking a hop for stability.

“If they could jump twice their hip height, to eight feet, the wings would be able to clear the ground, and they could execute a deeper flight stroke,” says paleontologist Brian Padian from the University of California Museum of Paleontology. “This may be the best option for taking off, though it depends on sufficient power from the legs.”

“The animal had to flap its wings to stall and slow its descent before it lands with its back feet and takes a little hop,” Padian explains. “Then it puts down its front feet, assumes a four-legged posture, straightens itself out, and walks away.”

Evidence for this unconventional landing and walking style also comes from fossilized tracks previously discovered in France. When on the ground, the scientists suggest, the creature would have used its ‘chopstick-like’ beak to catch and gulp down fish, invertebrates, and small amphibians from the water, much like a heron does. 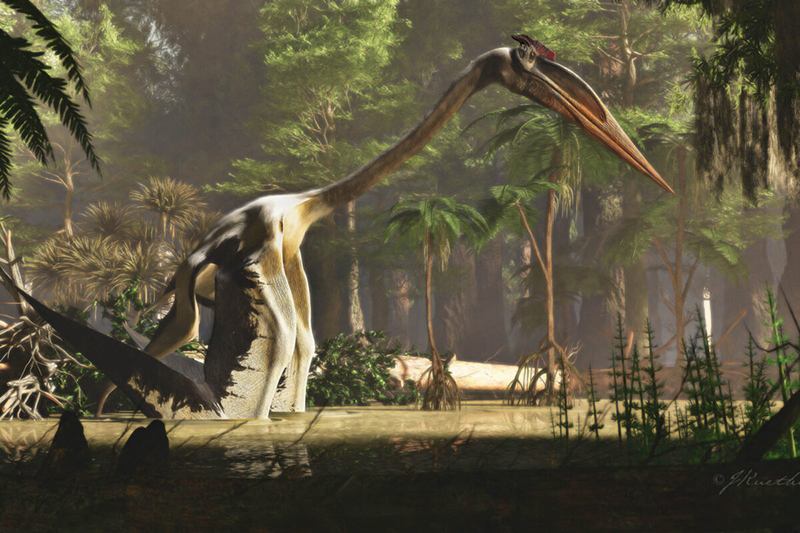 Q. northropi used a leap to take off. (James Kuether)

In the air, Q. northropi would have been much more like a condor, soaring in the air and using its relatively large head to help complete turns. The researchers think that the wings were most likely only attached to the front limbs, like the birds we know today.

The first proper analysis of smaller bones found at the Texas site has also revealed a smaller, newly identified species – Q. lawsoni, which seems to have had a wingspan of around 4.5 meters (nearly 15 feet). There are significant differences from the larger pterosaur, including in the structure of the skull and the spine.

“This is the first time that we have had any kind of comprehensive study,” says paleontologist Matthew Brown from the University of Texas at Austin. “Even though Quetzalcoatlus has been known for 50 years, it has been poorly known.”

The new findings, spread out over six published papers, give us a better understanding of these prehistoric beasts, and there are likely more species to find. Further study should also be able to answer remaining questions about Quetzalcoatlus, including the shape of its wing membrane.

Other topics covered by the new batch of papers give more insight into the spread, habitat, and evolutionary family tree of the Quetzalcoatlus species. The latest research will likely form the definitive source of reference for these creatures for many years to come.

Having ruled the skies for millions of years, the pterosaurs met the same dramatic end as the rest of the dinosaurs – but through a careful analysis of fossils, we can bring them back to life to some extent.

“‘These ancient flying reptiles are legendary, although most of the public conception of the animal is artistic, not scientific,” says Padian.

“This is the first real look at the entirety of the largest animal ever to fly, as far as we know. The results are revolutionary for the study of pterosaurs – the first animals, after insects, ever to evolve powered flight.”