Over the course of the history of the Universe, the Milky Way has not been serenely sailing through intergalactic space. Quite the contrary, actually. Over the last 13.6 billion years or so, it has collided with and consumed multiple other galaxies.

Now, through painstaking work, astronomers led by Khyati Malhan of the Max Planck Institute for Astronomy in Germany have mapped six of these ancient galactic mergers – five of which were already known, and a sixth that they have newly discovered. The results will lead to a more complete understanding of our galaxy’s history, growth and evolution, and the origins of the stars therein.

“The dynamical atlas of the Milky Way mergers that we present here provides a global view of the galaxy formation in action,” the researchers write in their paper.

“Thus, our study contributes to the initial steps of unraveling the full hierarchical build-up of our galaxy, and also understanding the origin of the globular clusters and stellar streams of the Milky Way halo.”

The Milky Way galaxy doesn’t just consist of a flattish disk of stars orbiting a supermassive black hole. Its gravitational reach is spherical, an orb that not only extends above and below the galactic plane, but encircles that disk and its surrounds. This structure is called the galactic halo, and it was predominantly formed by mergers with multiple other galaxies.

Working out that history takes some innovative detective work. The first hurdle to overcome is that it’s really tricky, in space, to know how far away things are. We can map stars to an X and a Y axis, but unless you know how intrinsically bright something is, its distance is harder to figure out. This, until recently, had made discerning groups of stars very difficult.

When the Milky Way interacts with another galaxy, the results are not a neat subsumption, either. The tidal (gravitational) forces at play stretch the other galaxy out, so that it forms what we call a stellar stream – a river of stars arcing across the sky, the guts of a disemboweled galaxy.

In addition, dense clusters of stars called globular clusters and satellite galaxies are also often thought to be remnants of galactic mergers, lurking in the halo. 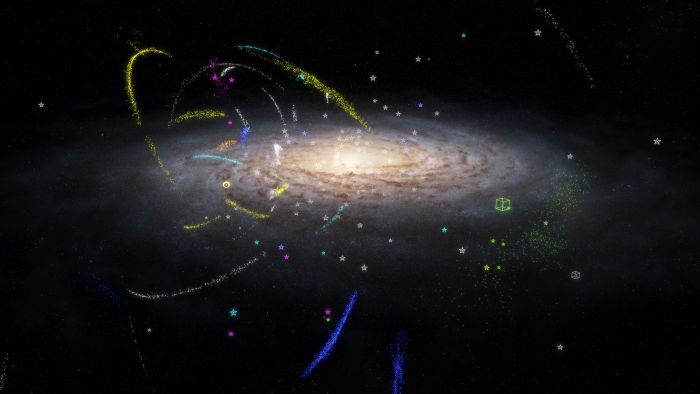 In recent years, astronomers have identified more of these streams in the galactic halo thanks to a project called Gaia. The Gaia satellite is using stellar parallax to work out the precise position and the motion of Milky Way stars in three-dimensional space with the highest accuracy yet, and the discoveries it has enabled are pretty spectacular, including the Gaia-Enceladus galactic merger that took place 9 billion years ago.

The early third release of Gaia data took place in December 2020, and, rather than analyzing groupings of stars manually, Malhan and his colleagues used a statistical procedure that helped to identify whether or not the groups were linked to a galactic merger. In total, the team included 170 globular clusters, 41 stellar streams, and 46 satellite galaxies, and assigned 62 of these objects to six merger events with smaller galaxies.

Five of those were known. There was Gaia-Enceladus, as previously mentioned; the Cetus merger; the LMS-1/Wukong merger, discovered in 2020; the Sequoia galaxy, which merged with the Milky Way around 9 billion years ago; and the Sagittarius dwarf galaxy, which has repeatedly punched through the Milky Way for billions of years. In addition, the team discovered an entirely new merger, which they named Pontus. We don’t know much about Pontus yet, but we do know that the stars associated with it are moving very slowly, against the main rotation of the Milky Way. This, they believe, could indicate that the merger took place very early in the history of our galaxy, possibly around 8 to 10 billion years ago.

They also learned something new about LMS-1/Wukong: three of the streams associated with it have some of the oldest stars in the Milky Way. This suggests the progenitor galaxy of those stars may have formed very early in the Universe’s history, although we as yet have no timeline for when it merged with the Milky Way.

There are also tantalizing hints of other mergers hiding out there in the Milky Way. The automated system missed two known mergers, including the Kraken; and a manual analysis of the data by the team suggested that there was yet another unknown merger. At least some of the 195 remaining objects could be tied to these; or they could be from smaller mergers that left behind smaller traces.

The next step, the researchers said, is to try to reconstruct a timeline of all the mergers.

“With such a wealth of information,” they write, “we will be able to explore the ‘temporal’ aspect of galactic archeology by building an understanding of the ‘chronological’ merging history of the Milky Way.”

The research has been published in The Astrophysical Journal.