When you view the world a certain way, it’s easy to forget not everyone has the same vision.

We do mean that quite literally. Aside from philosophical considerations of the subjective experience of color, different organisms have evolved to view the world differently, with eye structures and configurations optimized for various kinds of existence.

There are the obvious ones, of course: the horizontal pupils of herbivores give them a panoramic view of their surroundings, which helps both to see predators coming, and to avoid obstacles as the animals make an escape. Meanwhile, nocturnal predators have vertical pupils to maximize their night vision.

Yet other kinds of eyes out there in the magnificent, wide, diverse world see in ways we may not even begin to imagine. Here are some of the strangest eyes in the animal kingdom – jeepers creepers, indeed.

No other animal has a pupil quite like the cuttlefish. It’s shaped like a W, a trait biologists have determined helps the animals balance a vertically uneven field of light, which is common in the watery depths they inhabit. But that’s just the start. 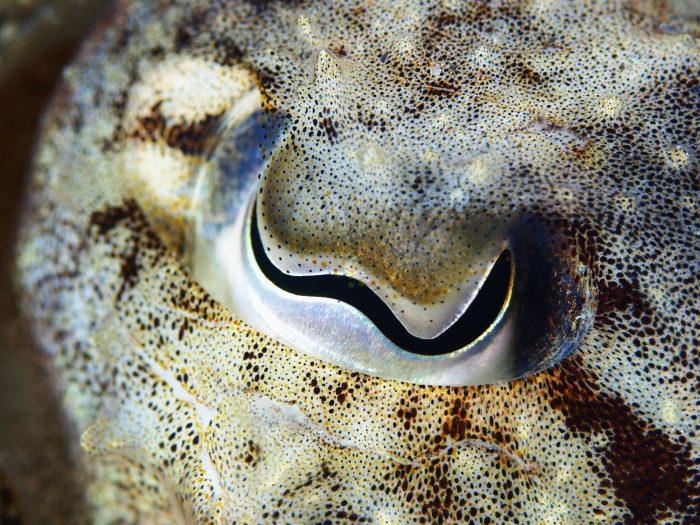 The eye of a cuttlefish. (A. Martin UW Photography/Moment/Getty Images)

Cuttlefish only have one type of photoreceptor, which should mean they can only see in monochrome. Yet those strange, wide pupils of cuttlefish and other cephalopods could facilitate an entirely different way of seeing color – by using the way light passing through a prism splits into a rainbow.

Known as chromatic aberration, it can be a problem when the lenses in our own eyes fail to focus colors onto the same point, turning crisp contrasts of shade into a softer wash of different hues. Cuttlefish may have turned this problem into a solution.

The smaller the pupil, the smaller the effect, so the wide pupils of cephalopods would be very prone to it. Even though this might result in blurred images, the blur is color-dependent – which means it could be a way for these ostensibly color-blind creatures to see colors. It’s possible they can see colors we don’t even know about! This may also explain how they can color-coordinate themselves to their environment for camouflage.

Unlike other cephalopods, though, cuttlefish eyes can swivel, allowing them to see the world in 3D as well; recently, scientists found these swivelly eyes result in stereoscopic vision, giving cuttlefish yet another advantage in their environment.

Birds, with their tiny, beady eyes, can probably see much that we can’t.

Cephalopods only have one photoreceptor type, as we have established. Humans have four, three cones and a rod, which means we have color sensitivities at three peak wavelengths, what we call trichromatic vision. (The rod is for low-light vision.) 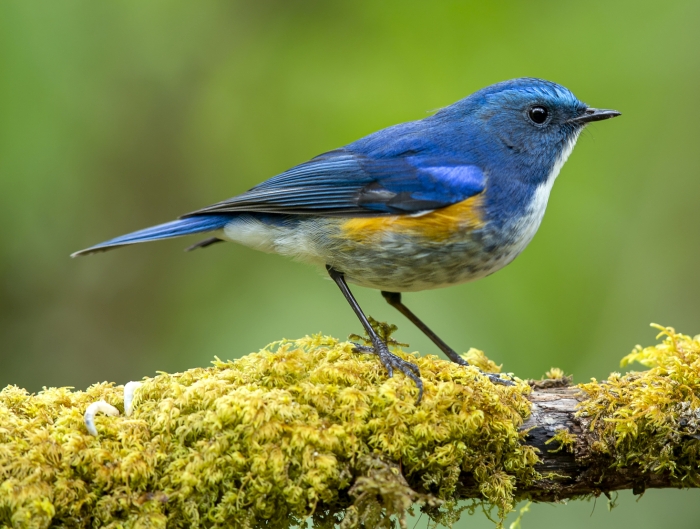 In addition, a protein in their eyes could allow them to see magnetic fields. Migratory birds can navigate extraordinarily well, and for a long time, it wasn’t clear exactly how they achieve this. Recently, scientists narrowed it down to a class of proteins called cryptochromes, which are sensitive to blue light.

Birds’ magnetoreception – that is, their ability to perceive magnetic fields – seems dependent on blue light, suggesting that the sense may be vision-based. There’s the distinct possibility that this magnetic filter for the color blue is the result of a quantum quirk. More recent lab studies have shown how a magnetic field affects a quantum property of cryptochromes, governing their electrons. 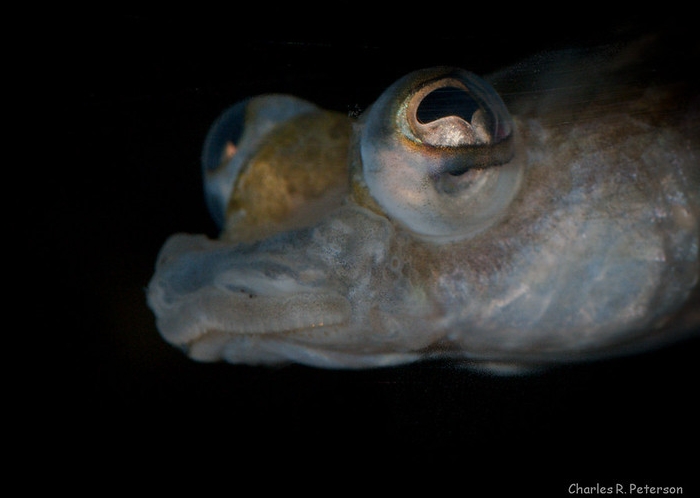 The strange eyes of the four-eyed fish. (Charles Peterson/Flickr/CC BY-NC 2.0)

This fascinating beastie doesn’t actually have four eyes – but its two eyes have evolved an incredible adaptation. Their ecological niche is the surface of the water, where they spend the majority of their time, preying on insects that hover around aquatic ecosystems.

Their eyes are situated on top of their heads, all the better to see the flying bugs in an aerial environment, my dear. But a portion of their optic organ sits below the surface of the water, and this is where things get interesting: each pupil is divided into two halves, one of which sits above the waterline (dorsal), while the other sits below (ventral), pointing downwards into the murky depths.

In this way, the fish can simultaneously see above and below the water – environments through which light propagates differently – to watch for both predators and prey. The thickness of the lens varies too, to accommodate the different refractive indices of aerial and aquatic media, as does the thickness of the corneal epithelium.

And the proteins in the retinal photoreceptor cells are slightly different as well – more sensitive to green light in the dorsal retina, and more sensitive to yellow light in the ventral retina. Since the fish often live in muddy environments, like mangroves, this is thought to improve vision in murky waters.

Of all the eyes in the animal kingdom, the most complex we know of belong to a bottom-dwelling marine crustacean that spends its life in burrows in rocks and the seafloor.

Humans have four photoreceptors, sure. Birds have six – amazing. Mantis shrimps of the order Stomatopoda, the overachieving little wotsits, have 16 in their compound peepers. What do they do with these photoreceptors? They see. They see all of the things. Don’t play hide-and-seek with a mantis shrimp. 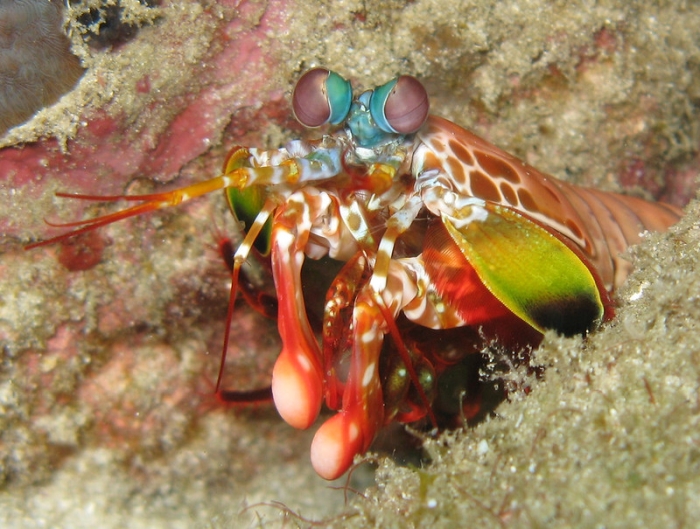 Each eye is mounted on a stalk, and can be moved independently. And each eye has the ability to perceive depth. Humans rely on binocular vision for depth perception. Mantis shrimps only need one. They can even see cancer before symptoms emerge.

If that’s not an ocular superpower, we don’t know what is.

What are eyes made of? Well, tissue, usually – a structure made of cells. Except if you’re a type of marine mollusk called a chiton, of the class Polyplacophora. 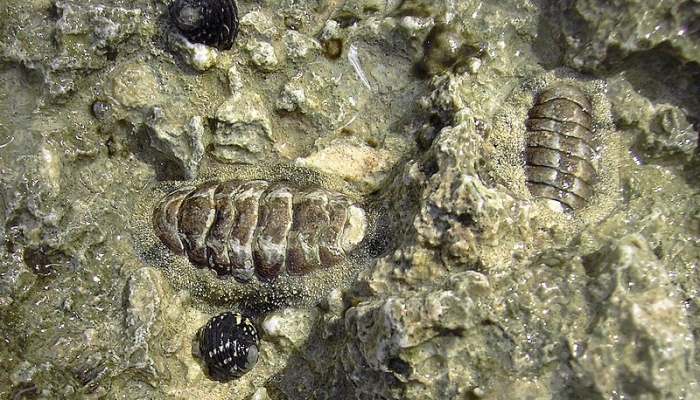 These smallish creatures live their lives protected by thick plates of interlocking armor as they creep around on rocks, grazing on whatever they find there. You might think such a creature would have soft eyes that can peer around the edges of their shells to watch for predators and sense the day-night cycle.

You would be wrong. Chitons have eyes, of course – but they’re embedded in their armor, and made of mineral; more specifically, a type of calcium carbonate known as aragonite.

The simple eyes of chitons, which litter the surface of their shells alongside hundreds of sensory organs known as aesthetes, consist of an aragonite lens covered by a cornea, and some sort of retina; to the surprise of scientists, these tiny primitive organs can actually resolve images.

What we don’t know is how that visual information is processed by the brains – chitons don’t really have much going on in that department. 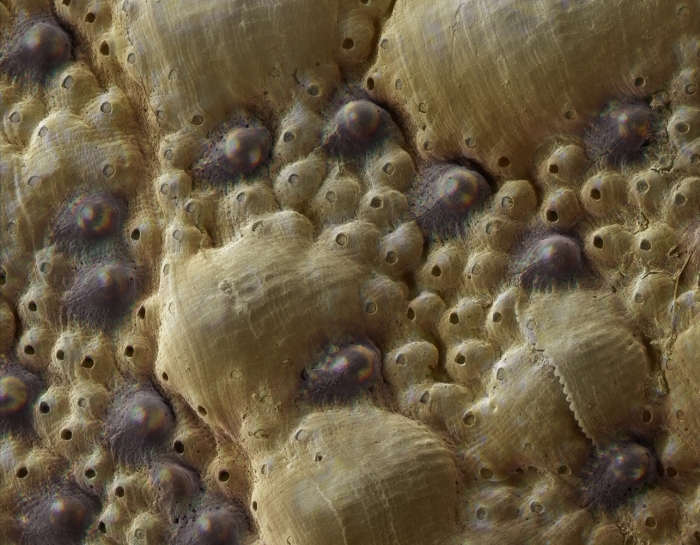 But they could help us better understand some of the wild paths evolution has taken in the past. Trilobites, for example, also had mineral eyes, with lenses made of calcite.

These extinct creatures had the first truly complex eyes that we know of, so understanding them can tell us a lot about how vision evolved on Earth in all its dazzling complexity.