Slender gold and silver tubes crafted during the Bronze Age are the world’s oldest drinking straws, a new study finds.

Archaeologists found the 3-foot-long (1 meter) metal tubes in 1897 while excavating a burial mound known as a kurgan from the ancient Maikop (also spelled Maykop) culture in the northwestern Caucasus, which primarily includes modern-day Armenia, Azerbaijan, Georgia, and parts of southern Russia. Until now, scientists couldn’t decipher the tubes’ purpose.

The new research suggests that people would have used the tubes, some of which are attached to tiny bull figurines, to drink beer with buddies from a communal vessel.

“The fine tubes are not as simple as they seem at first glance,” study first author Viktor Trifonov, an archaeologist at the Institute for the History of Material Culture at the Russian Academy of Sciences in St. Petersburg, told Live Science in an email. “Even [the] exquisite bull figurines attached to them can be both a decoration and a technical element for balancing the device.”

Related: In photos: Treasures of Mesopotamia

Archaeologists found the roughly 5,500-year-old straws in a large kurgan with three compartments, each of which held the remains and grave goods of an individual from the Maikop culture (about 3700 BCE to 2900 BCE). 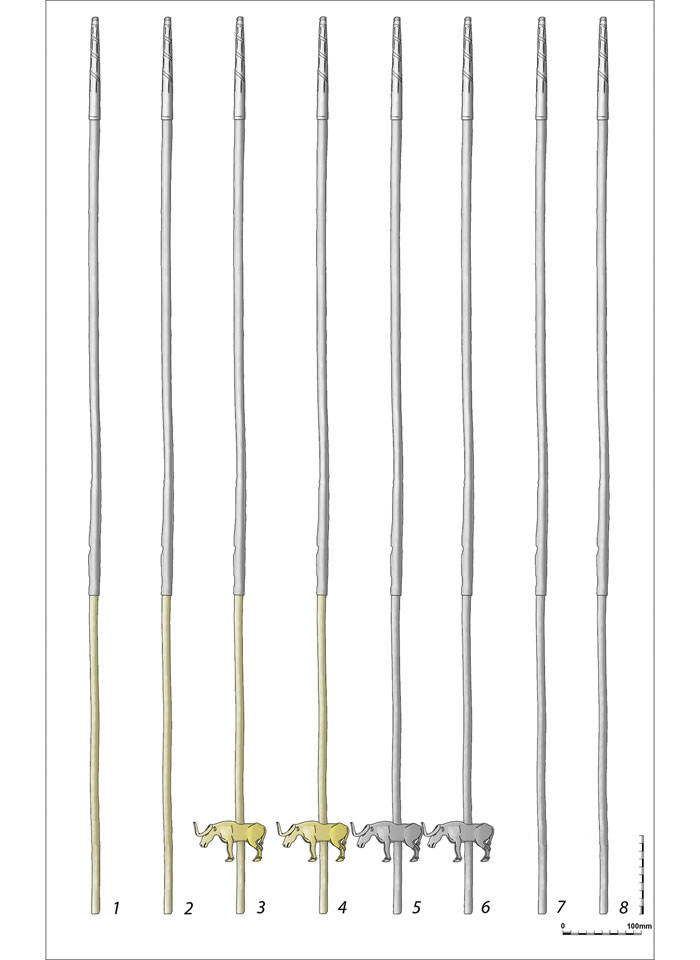 The largest chamber held the most luxurious grave goods, including hundreds of beads made of semiprecious stones and gold, ceramic vessels, metal cups, weapons, and tools.

Most of the goods lined the walls of the chamber. However, a bundle of eight lengthy metal tubes, four of which had a gold or silver bull figurine, were placed on the right side of the skeleton, the researchers wrote in the study.

Over the decades, various archaeologists wondered whether the tubes were scepters, poles for a canopy, or even a bundle of rods that fit into arrowheads.

But these interpretations weren’t convincing to Trifonov and his colleagues; none of the ideas addressed why these artifacts were tubes rather than solid poles, so the team decided to reanalyze the tubes. 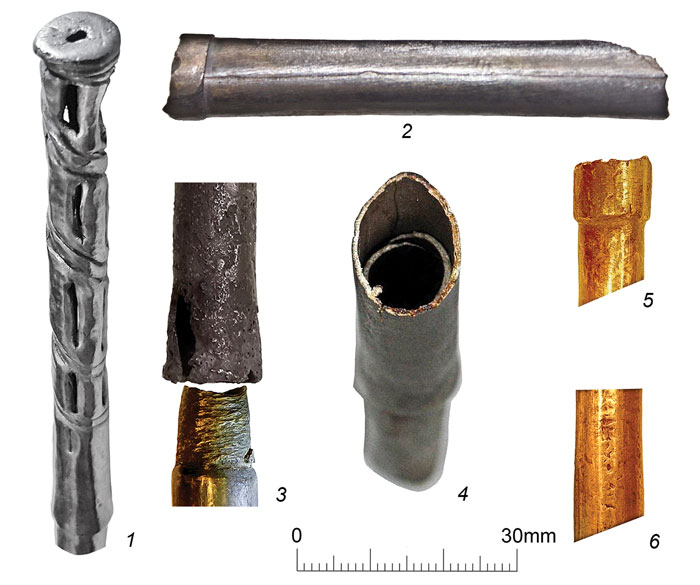 Above: The design of the ‘scepter’ components from the Maikop kurgan: 1) one of eight silver perforated tips; 2) joint between two segments of the silver tube, and longitudinal seam; 3–5) types of fittings; 6) probable soldered longitudinal seam

To them, the answer was straightforward: The tubes were likely drinking straws, designed for sipping a beverage – likely beer.

This idea fits in with other archaeological discoveries.

In the Near East, ancient people fermented barley into beer around 13,000 years ago, the researchers said. Large-scale brewing began in Western Asia in the fifth to the fourth millennium BCE, and there are seal impressions from that time in what is now Iraq and Iran showing people drinking through straws.

Other findings – for instance, that the ancient Sumerians drank beer through long reeds, including Queen Puabi, who was buried with long straws at the Royal Cemetery at Ur (modern-day Iraq) – show that communally sipping beer through long tubes was a favorite pastime. 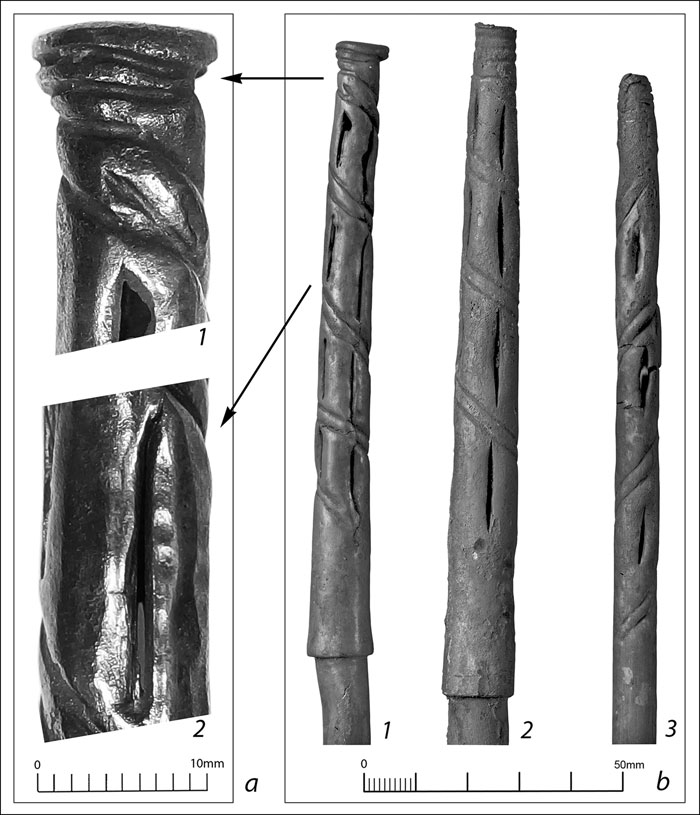 Above: Three of eight silver perforated tips from the Maikop kurgan: a) enlarged images of the design and slits; b) the silver tips in their original position.

To investigate, the team sampled the residue on the inside of one of the artifacts and found evidence of barley starch granules, cereal particles, and a pollen grain from a lime tree. However, the researchers aren’t sure whether the barley had been fermented into beer, so “these results should therefore be treated with caution, as further analyses are needed,” they noted in the study.

Even so, “The design, number of tubes, residue analysis and several critical similarities with Sumerian straws led us to conclude that the Maikop tubes are drinking straws,” Trifonov said.

It’s likely that the Maikop individual drank with friends, as “Ancient Near East art from the third millennium BCE onwards depicts multiple long straws placed in a communal vessel, allowing people standing or sitting nearby to drink together,” he said.

Trifonov added that the Maikop tubes have metal strainers that would “help filter out the impurities common in ancient beer.”

The research “sounds quite convincing, in light of other parallels, of the analyses of residues, and of the importance of alcoholic beverages in most ancient and modern societies,” said Aren Maeir, an archaeologist and professor at Bar-Ilan University in Israel who has studied similar drinking straws from later contexts in the Bronze and Iron Age Levant but was not involved with the new study. 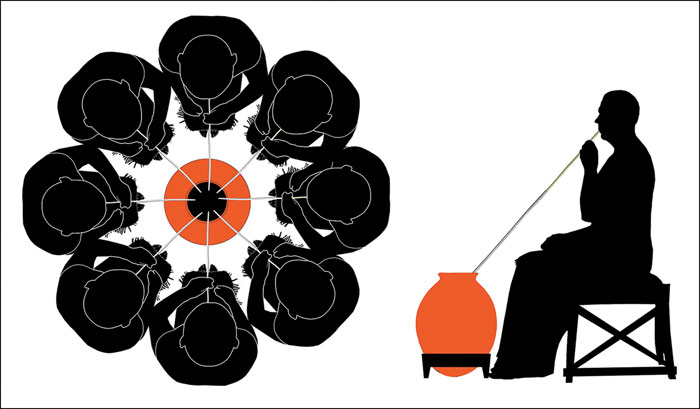 Reconstructed use of the drinking tubes from the Maikop kurgan. (V. Trifonov et al., Antiquity, 2022)

“I would have liked to have had more analyses of the straws for additional residue analyses (of different types), but perhaps it was not possible,” Maeir told Live Science in an email.

The Maikop straws are about 1,000 years older than the next-oldest surviving straws on record, which were found at the Royal Cemetery at Ur and date back 4,500 years, Trifonov said.

The straws are on display at the State Hermitage Museum in St. Petersburg. The study was published online 19 Jan. in the journal Antiquity.