The Red Sea has been hiding powerful geological forces that could put communities on the coast of Egypt and Saudi Arabia at risk.

The thought hit Sam Purkis like a wave, as he gazed out the window of a submarine 900 meters deep (3,000 feet) in Tiran Strait.

There, in the light of the vehicle’s flashlight, stood a gaping chasm three meters wide and eight meters tall (that’s 10 by 26 ft).

“Immediately, I realized that what we were looking at was the result of some geological force, which had broken the seafloor,” recalls Purkis, a marine geoscientist from the University of Miami.

Further research revealed this was the work of an undersea landslide, which likely triggered 10-meter-high waves that struck the Egyptian coastline roughly 500 years ago.

Today, that chunk of land is still teetering on the edge, and if it slips, models suggest it could trigger a second tsunami twice as large as its predecessor. Even when earthquakes occur in the region, they rarely generate tsunamis of this size.

“Just a little shake in the wrong place and the whole wall could fail, leading to a much larger tsunami than occurred 500 years ago,” explains Purkis.

“That area of Egypt, as well as Saudi Arabia, which are urbanizing so rapidly, have certain hazards which haven’t been previously recognized, but they need to be, to avoid a future catastrophe.” 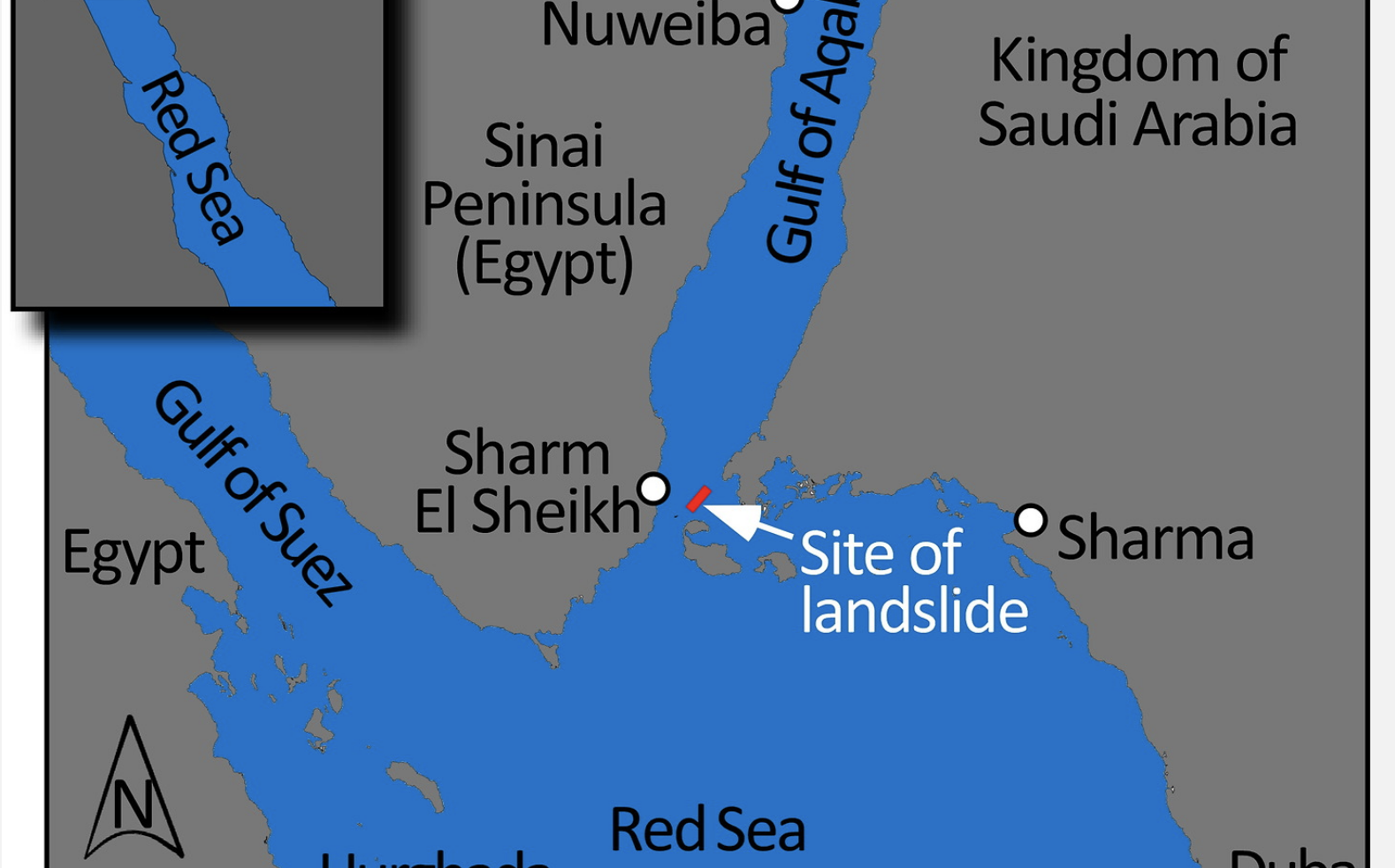 A map of where the ancient landslide occurred. (The University of Miami/OceanXplorer)

The Red Sea is a maritime rift, which means it is spreading apart as the two tectonic plates that border it gradually shift.

This makes the region highly susceptible to earthquakes, but the discovery of a submarine landslide suggests there are other tsunami-triggering forces at play that we’ve been overlooking.

Slope failures along parts of the Red Sea coastline could be especially hazardous in straits or other narrow passages, where a wave can quickly make landfall with very little warning.

In Tiran Strait, for instance, the authors say a 20-meter-high tsunami could “gravely threaten the rapidly urbanizing coastline” of Egypt and Saudi Arabia. According to models, an Egyptian resort town lies directly in the wave’s path.

The research voyage that discovered this submarine landslide was actually funded by a company that is developing the Saudi Arabian coastline.

Turns out, the risk assessment was a good idea. Despite slipping just 30 meters (100 ft), the landslide that occurred half a millennium ago caused powerful waves to hit the shore in just minutes.

If, at some point in the future, the land slips 50 meters more, models show the first impacts will be felt by the Egyptian resort city Sharm El Sheikh, which is located slightly to the south-west. Within a minute and thirty seconds, the waves crashing on the shore here could reach as high as 21 meters.

If the land slips by a further 100 meters, the waves that hit Sharm could stretch 35 meters tall. Slightly farther north, at Mousa Bay, the waves could actually top 45 meters, reaching the coast in less than three minutes.

A few minutes after that, the Saudi coastline on the other side of the strait would be impacted, albeit with slightly smaller waves. In the worst case scenario, researchers think the waves could reach 15 meters tall.

“Conspicuous in all simulations is how the bathymetry of the Straits confines and directs the tsunami,” the authors write.

“The wide and deep water to the north allows the wavefront to progress unhindered up the Gulf of Aqaba. To the south, the narrow and shallow Straits restrict wave entry into the Red Sea.”

It’s no surprise that historical records somehow missed the undersea landslide that triggered a tsunami 500 years ago. Not only was the event not marked by an earthquake, but the coastline where Sharm now sits was only an occasional base for fishermen at the time, which means few people would have probably seen the waves.

Today, the reality is very different. That’s why submarine studies of this kind are so important; they can reveal vulnerabilities in coastline infrastructure that could put communities at risk.

The undersea slopes offshore Sharm, for example, are very steep. If these walls also slide further into the deep, it could trigger a ripple of waves that could easily make it to the Saudi coast.

Being able to predict when these tsunamis will strike could save lives and infrastructure. Undersea landslides in the Red Sea should be monitored like earthquakes going forward, the researchers argue.