Jumping spiders may have exceptional eyes, but one adorable species seems to have a curious lack in the vision department. New experimental evidence suggests that a jumping spider called Saitis barbipes has no photoreceptors capable of perceiving the color red.

What makes this so strange is that S. barbipes – like many jumping spiders – is vividly hued: the male daubed with brilliant splashes of rich, resplendent red.

These red markings crown his head and extend along the two of his rear legs, usually used for mating and threat displays.

“We assumed they were using color for communication,” says behavioral ecologist David Outomuro of the University of Pittsburgh.

But if the spiders can’t even see the color red, this makes the markings and their placement something of a mystery.

The researchers conducted their study using 30 male and 7 female S. barbipes spiders collected in Slovenia and transported to Germany and the US for study in laboratories there. The spiders were killed via suffocation with carbon dioxide, and their eyes excised so that the researchers could examine the photoreceptors therein. 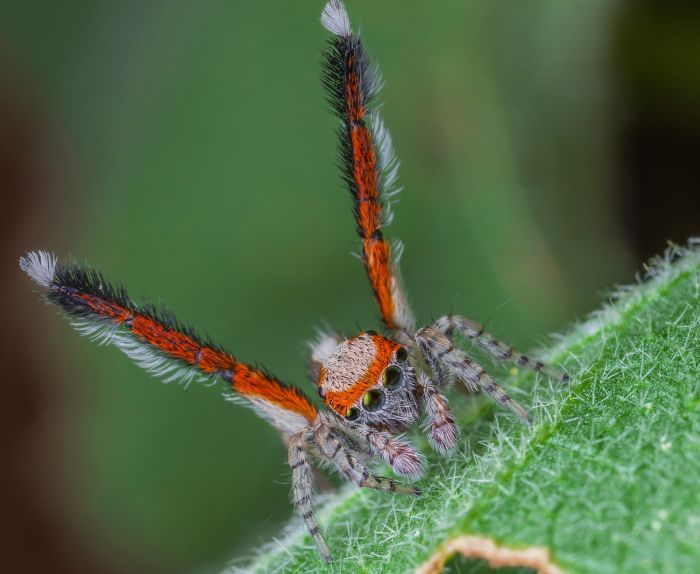 Instead, to the spiders, it seems that what we see as red merely looks like an extension of their black markings. What they can see, apparently, are patches of ultraviolet, but these don’t correspond with the patches of red.

“Males have bold red and black coloration on their forward-facing body surfaces, which they display during their courtship dances; whereas, females lack red coloration altogether. This initially suggested to us that the red color must play some role in mate attraction,” says biologist Cynthia Tedore of the University of Hamburg in Germany.

“Instead, we found that red and black are perceived equivalently, or nearly so, by these spiders and that if red is perceived as different from black, it is perceived as a dark ‘spider green’ rather than red.”

Animals can use their coloration for many purposes, of which communication is just one. Interaction with predators is another, whether by camouflage to stay hidden or by appearing threatening to warn predators off.

According to the team’s research, the former might be possible. They modelled how predators with predominantly red vision, such as birds and lizards, might see the spiders and found that, from a distance, the red patches might blur with the black markings to appear more brownish, like the spider’s leaf litter habitat. Together, such markings would have less contrast against a brown background than either color alone.

Future work, the researchers noted, should explore the different possibilities to try to figure out the reasons for S. barbipes‘ fabulousness. Meanwhile, the research highlights how we might need to think about differences in animal vision when designing our own world.

“What does a wind turbine or a car window or a high-rise look like to a bird that might run into it?” notes behavioral ecologist Nathan Morehouse of the University of Cincinnati.

“We need to consider their perceptual worlds to coexist. But I also think it’s inherently fascinating to imagine our ways into the lives of animals that experience the world in a way that is completely alien to us.”

The team’s research has been published in The Science of Nature.