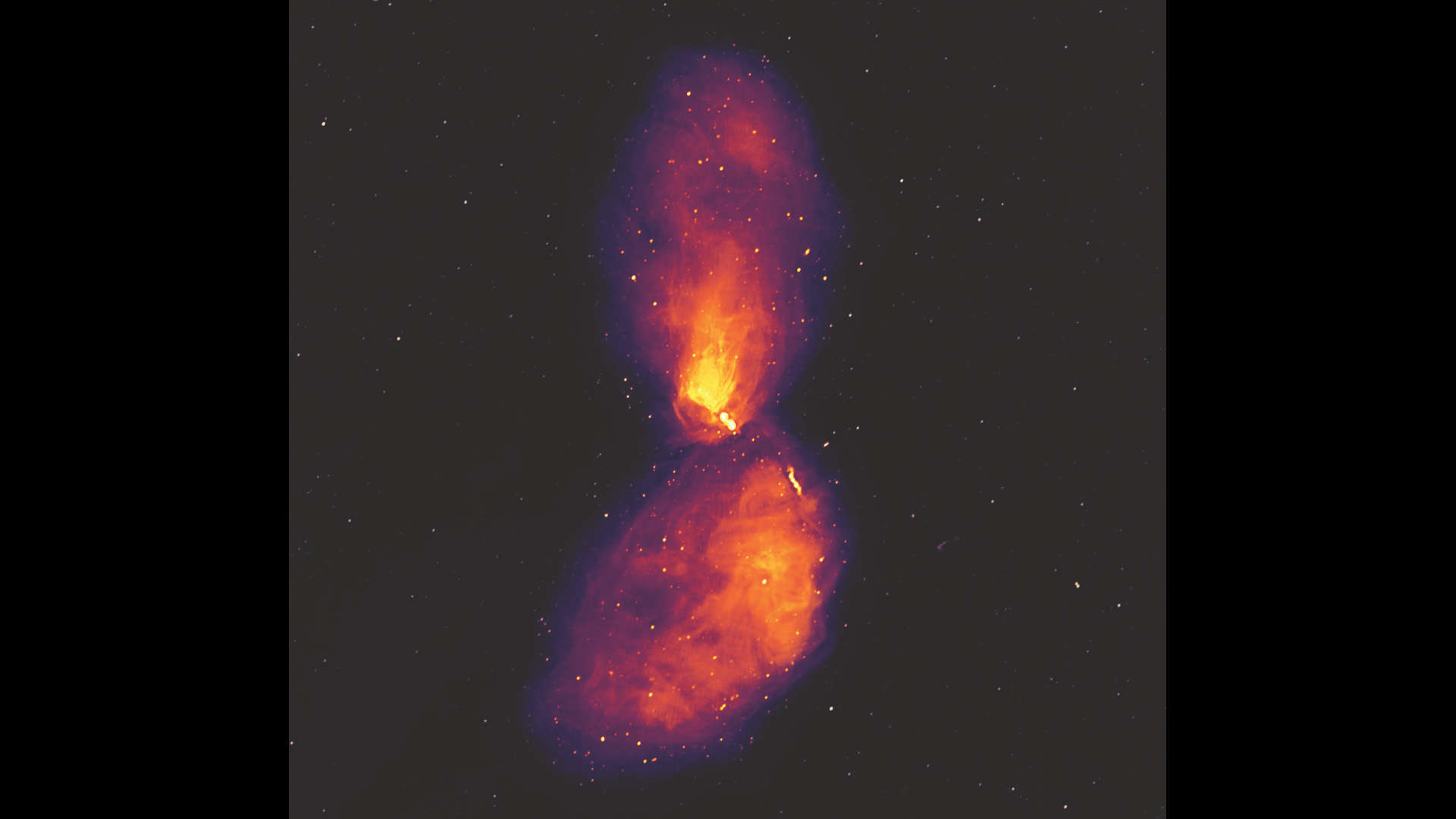 Astronomers have produced a detailed image of a massive eruption from the nearest feeding supermassive black hole that spans the size of 16 full moons in the sky.

The image, capturing radio emissions of material ejected by the black hole at nearly the speed of light, shows gigantic lobes of plasma spreading more than a million light-years away from the center of its home galaxy, Centaurus A.

Centaurus A, some 12 million light-years from Earth, is the fifth-brightest galaxy in the sky as seen from our planet. At its center sits the nearest known actively feeding black hole to our planet, a monster with the mass of 55 million suns. The black hole devours gas, dust and other material in its vicinity, then ejects it in the form of powerful jets that spread far away into intergalactic space, creating the massive bubbles that can be seen in this image.

New images: A powerful jet emerges from a black hole in unprecedented detail

The galaxy itself occupies only a very small patch at the center of the image. The dots in the background are not stars but other similar, but much more distant, galaxies. The foreground dots are stars in our own galaxy, the Milky Way.

The image was captured with the Murchison Widefield Array (MWA) telescope in the outback of Western Australian, a quiet location with no radio interference and a wide field of view.

The image consists of radio, optical and X-ray observations, Benjamin McKinley, an astronomer at Curtin University in Australia and lead author of a new study describing the eruption, said in a statement.

The radio plasma emitted by the black hole is displayed in blue and appears to be interacting with hot X-ray-emitting gas (orange) and cold neutral hydrogen (purple). Red hues reveal the so-called H-alpha spectral lines characteristic of hydrogen that is losing electrons.

“Previous radio observations could not handle the extreme brightness of the jets and details of the larger area surrounding the galaxy were distorted, but our new image overcomes these limitations,” said McKinley.

McKinley said the galaxy appears brighter at the center, where energy is concentrated and where it is more active. As the energy dissipates toward the galaxy’s outskirts, the galactic matter appears fainter.

“In this model, clouds of cold gas condense in the galactic halo and rain down onto the central regions, feeding the supermassive black hole,” Gaspari said in the statement. “Triggered by this rain, the black hole vigorously reacts by launching energy back via radio jets that inflate the spectacular lobes we see in the image. This study is one of the first to probe in such detail the multiphase CCA ‘weather’ over the full range of scales.”

The study was published on Thursday (Dec. 23) in the journal Nature Astronomy.