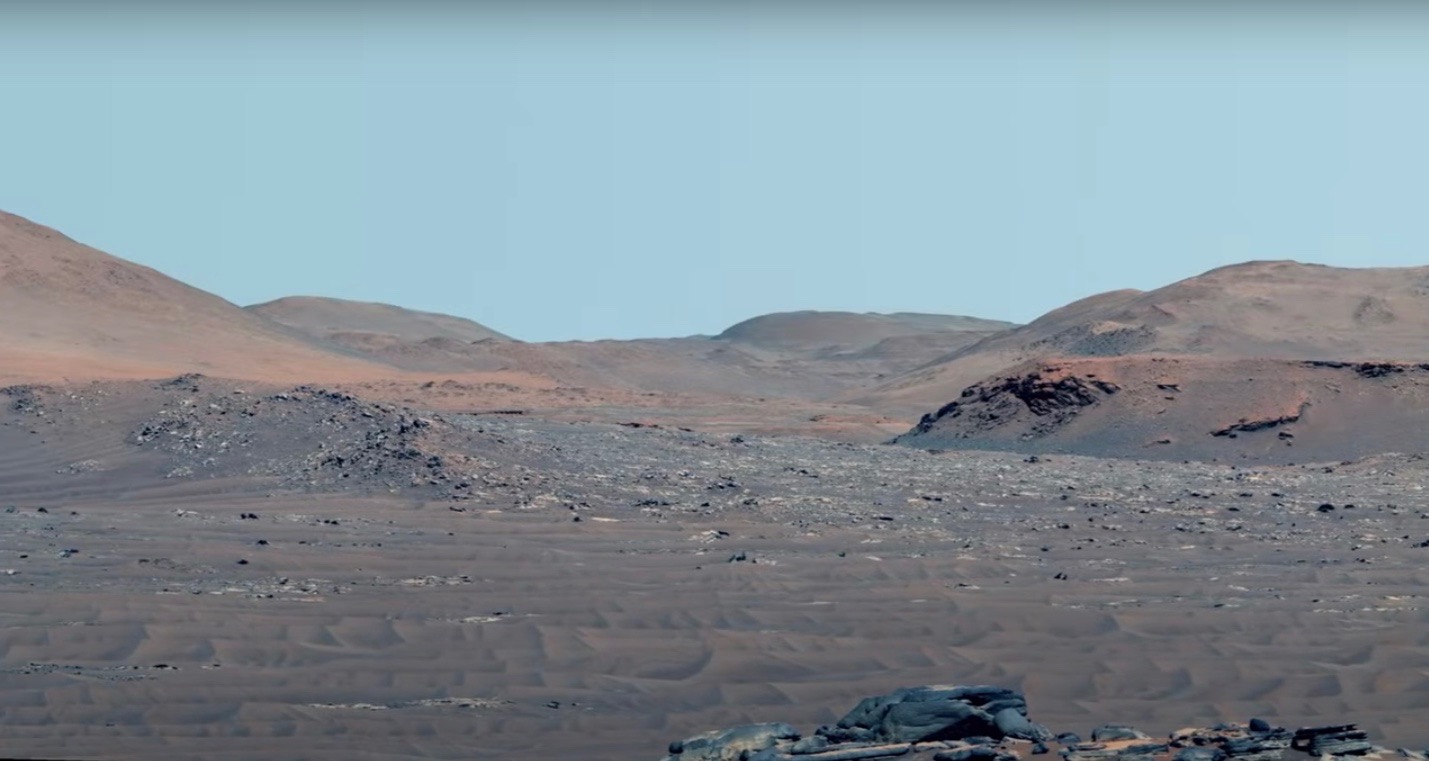 A detailed new image provides a great look at the Perseverance Mars rover’s Red Planet home and shows why the mission team is so excited to explore it.

Perseverance landed inside the 28-mile-wide (45 kilometers) Jezero Crater on Feb. 18, 2021, kicking off a surface mission that centers on hunting for signs of ancient Mars life and collecting samples for future return to Earth.

Jezero is a great place to do this work, mission team members say, because the crater hosted a big lake and a river delta billions of years ago. The new image — a mosaic composed of photos taken on Nov. 28 by Perseverance’s Mastcam-Z camera system — shows where that river flowed in, carving a big notch into the crater wall.

Also visible in the photo are solidified remnants of the ancient delta and an intriguing whitish patch of crater floor that the mission team has dubbed “the bacon strip.”

“We think this is a layer of mud deposited on the lake bottom, now turned to rock,” Perseverance project scientist Ken Farley said in a video highlighting the mosaic, which NASA’s Jet Propulsion Laboratory (JPL) posted on YouTube on Dec. 21. (JPL manages Perseverance’s mission.)

“That mud layer is important, because it may be the best place to look for evidence of Martian life that could have lived in Lake Jezero,” added Farley, who’s based at the California Institute of Technology in Pasadena.

The mosaic also shows how rugged and diverse Jezero’s landscape is. For example, 3-foot-high (0.9 meters) sand dunes, dark rocks that appear to be volcanic and reddish layered delta remnants are packed cheek-to-jowl in one patch of the mosaic.

The shifting sands present an obstacle that the rover team does not plan to tackle.

“We’d like to move quickly to the delta, but unfortunately, Perseverance has to take a longer route to avoid these sand dunes,” Farley said.

The car-sized rover has already driven more than 1.8 miles (2.9 kilometers) on Jezero’s floor to date, mission team members said in another JPL video, which was released on Tuesday (Dec. 28).

Perseverance has also snapped more than 100,000 images, collected more than 50 gigabytes of data and sealed up six of its 43 titanium sample tubes so far on Mars, they added. The collected samples will be returned to Earth, perhaps as early as 2031, by a joint NASA-European Space Agency campaign.

The Dec. 28 video also highlighted the accomplishments of the Ingenuity helicopter, which flew to the Red Planet on Perseverance’s belly. The 4-pound (1.8 kilograms) Ingenuity quickly aced its original five-flight technology-demonstrating mission and shifted into a new role as a rover scout.

The little chopper has 18 Red Planet flights under its belt and is still going strong.

“The helicopter has become a real asset and partner to our science team,” Jessica Samuels of JPL, Perseverance’s surface operations mission manager, said in the Dec. 28 video.

That video mostly looks back at Perseverance’s action-packed first 10 months on Mars, but it also takes some time to highlight exciting developments to come — specifically, exploration of the delta remnant.