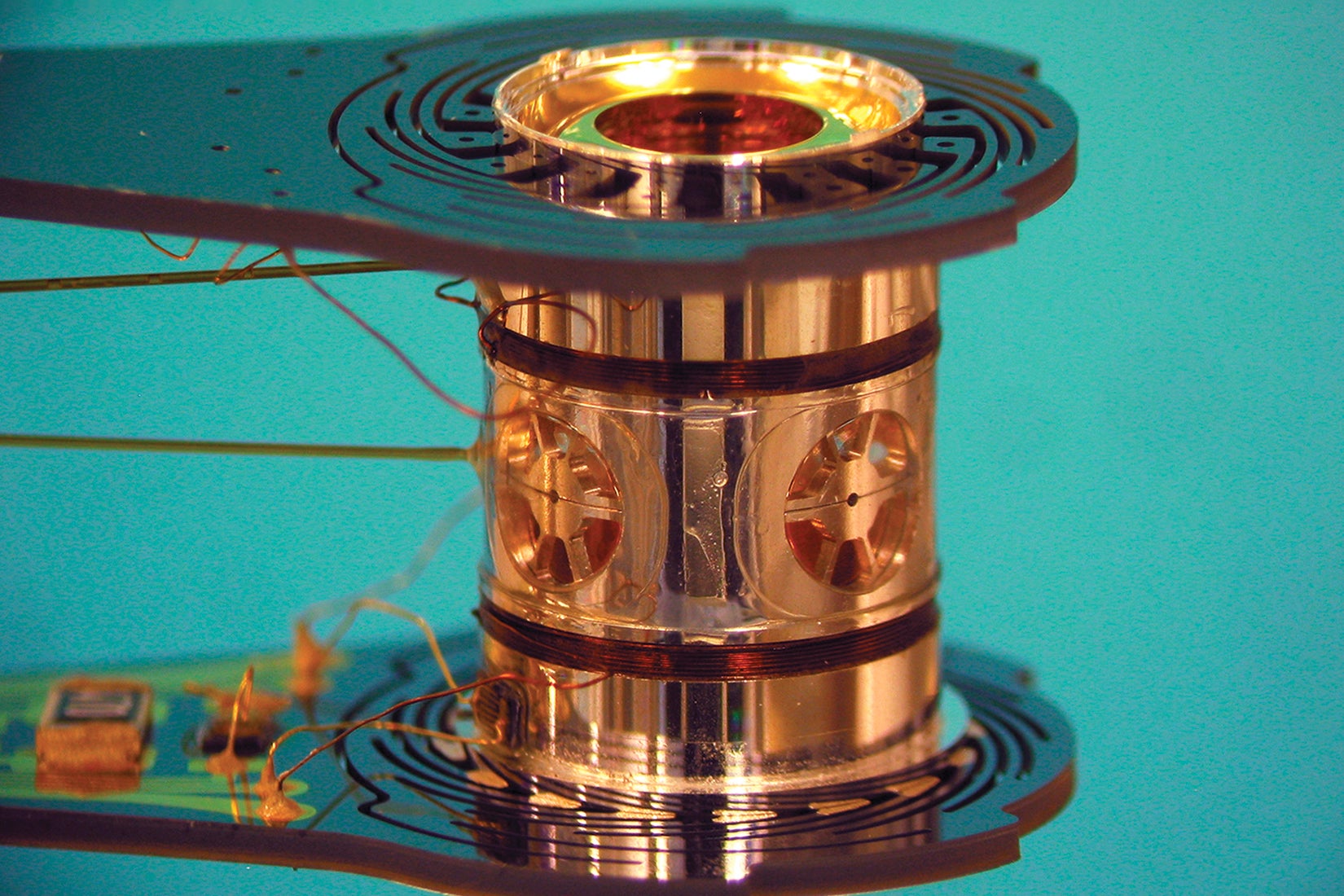 Nuclear fusion could potentially provide abundant, safe energy without the significant production of greenhouse gas emissions or nuclear waste. But it has remained frustratingly elusive as a practical technology for decades. An important milestone toward that goal has now been passed: a fusion reaction that derives most of its heat from its nuclear reactions themselves rather than the energy pumped into the fuel from outside.

A team at the National Ignition Facility (NIF) at Lawrence Livermore National Laboratory (LLNL) in California has reported this so-called burning plasma condition using an approach called inertial-confinement fusion, where the ferociously high temperatures and pressures needed to initiate fusion in a fuel of hydrogen isotopes are produced by intense pulses of laser light. The researchers’ findings appear in Nature, with companion papers published in Nature Physics and on the preprint repository arXiv.org. “The data clearly show that they have reached that condition,” says fusion physicist George Tynan of the University of California, San Diego, who was not involved in the work.

“The NIF results are a really big deal,” says fusion physicist Peter Norreys of the University of Oxford, who was not part of the studies. “They show that the pursuit of an inertial fusion reactor is a realistic possibility for the future and not built upon difficult and insurmountable physics.” Plasma physicist Kate Lancaster of the University of York in England, who was also not involved in the research, agrees. “This is an incredible achievement, which is a culmination of a decade of careful, incremental research,” she says.

Nuclear fusion, the process that fuels stars and that is triggered explosively in hydrogen bombs, requires extreme heat and pressure to give atoms enough energy to overcome the electrostatic repulsion between their positively charged nuclei so that they can fuse and release energy. The usual fuel for producing controlled fusion in reactors consists of a mix of the heavy hydrogen isotopes deuterium and tritium, which may unite to make helium. The energy this releases can be harnessed for electricity generation—for example, by using the heat to drive conventional power turbines. Unlike nuclear fission—the process used in all nuclear power plants today—fusion does not use or generate large quantities of long-lived radioactive materials. And in contrast to fission, fusion does not involve a chain reaction, which makes it inherently safer: any changes to the working conditions of a fusion reactor will cause it to automatically shut down in an instant.

Fission’s advantage is that it typically occurs in reactors at temperatures of a little more than 1,000 kelvins, whereas deuterium-tritium (D-T) fusion starts at temperatures of around 100 million kelvins—hotter than the heart of the sun. Handling such a seething plasma is, to put it mildly, immensely challenging. One approach is to confine it with magnetic fields into a doughnut shape inside a chamber called a tokamak. This is the method of choice for many fusion projects, including the International Thermonuclear Experimental Reactor (ITER). for which a global collaboration is building a massive experimental reactor in France that is slated to achieve sustained fusion no earlier than 2035.

Inertial fusion does not try to trap the plasma but instead relies on inertia alone to hold it together for a brief instant after fusion is triggered by an ultrafast compression of the fuel. That creates a very brief outburst of energy—a tiny thermonuclear explosion—before the burning fuel expands and dissipates its heat. “Fusion energy schemes based on inertial confinement involve repeating the pulsed process over and over again, much like the pistons in an internal combustion engine, firing several times per second to give nearly continuous power,” says Omar Hurricane of LLNL, chief scientist for the NIF’s Inertial Confinement Fusion program, who was a team leader for the latest experiments.

Although inertial-confinement fusion does not have to solve the problem of maintaining a hot, wobbly plasma inside a tokamak, it does require tremendous inputs of energy to trigger the fusion process. The NIF team used 192 high-power lasers, all focused into a chamber called a hohlraum that is about the size and shape of a pencil’s eraser and contains the fuel capsule of deuterium and tritium. The laser energy heats and vaporizes the capsule’s outer layer, blowing it away and creating a recoil that compresses and heats the fuel in the center. In the NIF method, the laser beams do not directly spark detonation but instead strike the hohlraum’s inner surface, unleashing a furious bath of capsule-compressing x-rays within the tiny chamber.

Researchers demonstrated the feasibility of starting fusion this way back in the 1970s. But getting to the burning-plasma point has been a slow process, full of technical hurdles and setbacks. “For many decades, researchers have been able to get reactions to occur by using a lot of external heating to get the plasma hot,” says Alex Zylstra of LLNL, a member of the NIF team. “In a burning plasma, which we have now created for the first time, the fusion reactions themselves provide most of the heating.” Those conditions last only for about 100 trillionths of a second before the plasma’s energy is dissipated.

“There was no one secret that allowed them to make this breakthrough but a whole bunch of smaller advances,” Tynan says. To have any hope of getting the fusion process to sustain itself, the energy it produces should be deposited mostly in adjacent fuel layers rather than leaking from the capsule to heat the surroundings. This means that the capsule has to be sufficiently large and dense to keep the energy inside while still collapsing symmetrically—which is one of the issues the NIF team has cracked. The researchers have also tweaked the hohlraum’s design to ensure its interior uniformly fills with x-rays, ultimately creating a smoother, stronger and more efficient implosion of the fuel capsule. “We had to learn how to better control the symmetry while making the implosion bigger,” Hurricane says. Such improvements have required decades of effort. “It’s been a very long trial-and-error process, guided by computations,” Tynan says.

Of the experimental runs that the NIF researchers have reported, four conducted in 2020 and early 2021 exceeded the threshold fusion output for a burning plasma. The most recent of these were in February 2021, so “it clearly took some time for them to convince colleagues of the validity of their results,” says Vladimir Tikhonchuk, a plasma physicist at the University of Bordeaux in France, who was not involved with the work. But they have evidently done so. “I truly believe publication of these papers is an important scientific event,” Tikhonchuk adds.

Making fusion viable requires more than merely burning plasma, however. For one thing, although the plasma is self-heating, it might still radiate more heat than it generates, including the energy lost when the implosion blows itself apart after reaching peak compression. “Even if you have burning, the reaction fizzles out if the radiative losses are too high,” Tynan says. But the NIF team notes that, in one of its runs, the heating exceeded such losses.

That brings the scientists closer to the next big goal: ignition, where the net energy release from the fusion reaction exceeds the energy injected to produce it. On average, they can produce about 0.17 megajoule of fusion energy for an input laser energy of 1.9 megajoules. In other words, these NIF shots channel the energetic equivalent of a half-kilogram of exploding TNT into the tiny hohlraum only to get about 10 times less energy out. But that is still close enough to the break-even point to get fusion researchers fired up. “They are right on the threshold of achieving a propagating ignition burn,” Tynan says.

Lancaster is optimistic about that. “We are now in a regime where modest improvements can create massive gains in output energy,” she says. “We have definitely moved from an ‘if’ to a ‘when’ for ignition.”

Even achieving ignition would be just the end of the beginning for fusion. For one thing, net energy gain must not only be demonstrated but also improved to compensate for inefficiencies in converting the heat into electricity. Better methods must also be developed for on-site production and handling of tritium to use as fuel. And in the specific case of inertial-confinement fusion, the exquisitely designed fuel capsules must somehow be made in abundance—and on the cheap. “Right now they cost $1 million and are custom pieces of kit made in the lab,” Tynan says. But for any inertial fusion power plant to turn a profit, “you have to be able to make hundreds of thousands of them a day at 10 cents a piece.” And these spectacular results for burning plasma in inertial confinement “do not really translate to tokamaks” at all, Hurricane warns.

“People working in this domain understand very well that there is a large gap between the [eventual] demonstration of ignition and a commercial fusion reactor,” Tikhonchuk says. That gap certainly will not be closed at NIF, which is geared toward exploring the basic physics of fusion, especially in the context of nuclear stockpile management and national security. “We do not yet have lasers of a needed energy and power operating with a repetition rate of a few shots per second,” Tikhonchuk adds—although Lancaster says that these “are well on the way, with big programs in the U.K., the U.S., France and Germany, for example.”

“Now that NIF has demonstrated that [burning plasma conditions] can be done in a controlled laboratory setting,” Norreys says, solutions to the remaining challenges “need to be studied in the coming years with renewed vigor.”

“The challenge is [pivoting] from ‘Is the physics even possible?’ to ‘Can we engineer a viable system that has sufficient lifetime and that is safe enough and do all those things at an affordable price?’” Tynan says. “That’s still the big open question in front of the research community.”