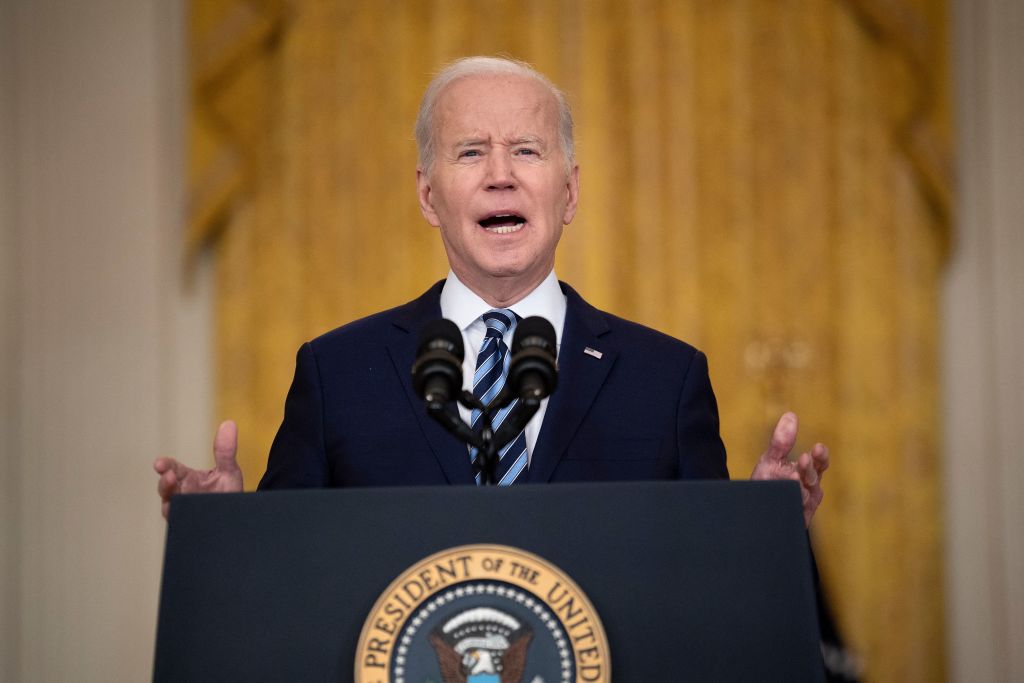 Russia invaded Ukraine this week, launching military attacks in multiple cities that have so far killed at least 40 people, according to the Associated Press. World leaders around the globe have responded to the conflict, and Biden announced today that the U.S. will impose new sanctions in response.

“Putin is the aggressor. Putin chose this war, and now he and this country will bear the consequences. Today, I’m authorizing additional strong sanctions and new limitations on what can be exported to Russia,” Biden said in a televised public statement today.

“We estimate that we’ll cut off more than half of Russia’s high-tech imports. That will strike a blow to their ability to continue to modernize their military. It’ll degrade their aerospace industry, including their space program,” he added.

These new sanctions, Biden noted, are part of an international response against Russia’s actions in Ukraine.

“The United States is not doing this alone,” he said. “We’ve been building a coalition of partners representing well more than half the global economy, 27 members of the European Union including France, Germany, Italy, as well as the United Kingdom, Canada, Japan, Australia, New Zealand and many others to amplify the joint impact of our response.”

Yesterday, both NASA and Russia’s space agency Roscosmos said that cooperation in space will continue as normal. But since just yesterday, Russia has made these attacks in Ukraine.

“Russian militaries began a brutal assault on the people in Ukraine without provocation, without justification,” Biden said of the invasion. “Without necessity, this is a premeditated attack.”

British Prime Minister Boris Johnson also spoke today about how projects between the U.K. and Russia might be affected.

“Hitherto, I have been broadly in favor of continuing artistic and scientific collaboration, but in the current circumstances it’s hard to see how even those can continue as normal,” Johnson told members of Parliament during a session today.

“Do you want do destroy our cooperation on the ISS?” Rogozin tweeted in Russian (translated with Twitter translate).

“If you block cooperation with us, who will save the ISS from uncontrolled deorbiting and falling into the United States or Europe?” There is also the option of dropping a 500-ton structure to India and China. Do you want to threaten them with such a prospect? The ISS does not fly over Russia, so all the risks are yours. Are you ready for them?” Rogozin added.

Russia’s space program, which Biden stated will be affected by these new sanctions, has multiple new missions and technologies in development.

The nation is building a new crew capsule called Orel, which is planned to launch on Russia’s new Angara rocket currently in testing and meant to launch from a new pad at the Vostochny Cosmodrome in Russia. Russia has stated that this capsule is being designed to be capable of docking with Gateway, NASA’s planned outpost in orbit around the moon.

The precise impact of new sanctions to this and other upcoming projects in Russia’s space program remains unclear. Also in jeopardy are upcoming launches that mark collaborations between Russia and countries opposing its activities in Ukraine.

For example, on April 6, the European Space Agency (which does not include Ukraine) will launch two Galileo satellites on a Russian Soyuz vehicle from French Guiana, held by France, a NATO member and EU nation.

Additionally, private satellite company OneWeb, which is headquartered in London with offices in the U.S., planned to launch a new crop of satellites aboard a Soyuz rocket on March 4 from the Baikonur Cosmodrome in Kazakhstan.