A critical stage of the James Webb Space Telescope’s mirror alignment has been completed, keeping the state-of-the-art observatory on track to commence science observations in a few months.

On March 11, the telescope completed its final round of fine phasing to correct alignment errors. No issues have been identified, and the Webb team is sure that every optical parameter is working as well as it can.

“More than 20 years ago, the Webb team set out to build the most powerful telescope that anyone has ever put in space and came up with an audacious optical design to meet demanding science goals,” said astrophysicist Thomas Zurbuchen, associate administrator for NASA’s Science Mission Directorate.

“Today we can say that design is going to deliver.”

This bright object, around 2,000 light-years away, is just over 16 times intrinsically brighter than the Sun – a nice, clear target for Webb. A red filter was used to optimize visual contrast; and, although the telescope was just looking at the star, its instruments are so sensitive that background stars and galaxies can also be seen.

“We have fully aligned and focused the telescope on a star, and the performance is beating specifications. We are excited about what this means for science,” said Ritva Keski-Kuha, deputy optical telescope element manager for Webb at NASA Goddard.

Although segmented telescopes have been built on Earth, Webb is the first space telescope with a segmented mirror, consisting of 18 discrete hexagonal segments.

The alignment of these mirrors is crucial; they need to be within nanometers to form a single mirror surface. Considering that the telescope is not in easy reach for service missions, having everything operating perfectly is crucial.

Webb is parked in a gravitationally stable region of space generated by the interaction between Earth and the Sun called Lagrange point 2, or L2. These stable pockets are ideal for spacecraft to hang out, since they minimize fuel consumption.

ESA’s Gaia spacecraft, a project to map the Milky Way, is also in L2 as of 2014, and, not long after the new telescope arrived, Gaia managed to capture Webb with its finder scope instrument. Below, you can see it circled in green, and, in the two insets, zoomed in. 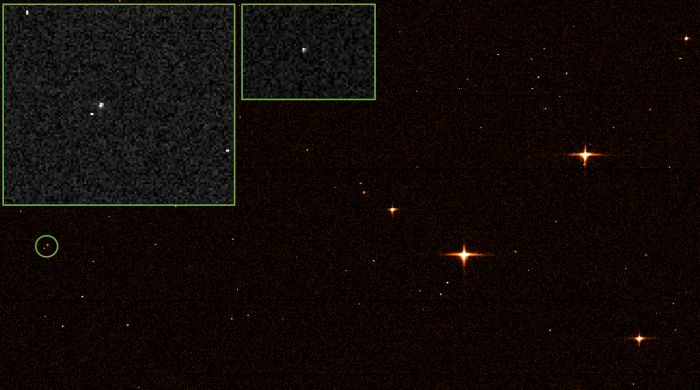 Webb, as seen by Gaia. (ESA/Gaia/DPAC)

At the time, February 18, the two spacecraft were separated by a distance of about a million kilometers (620,000 miles, give or take); in Gaia’s image, Webb looks like another star in a sea of them, spilled across the dark expanse of space. The two spacecraft have very different missions, but maybe it’s comforting to know they’re not alone out there, far from home.

Over the coming six weeks, Webb’s alignment process will be completed. Then, the telescope will begin its final preparations for science operations. The first science observations from the telescope are expected to arrive sometime in the Northern Hemisphere summer.

Webb, peering into the cosmos using infrared eyes, will reveal much that we can’t currently see. It’s expected that it will show us distant reaches of the Universe, giving us more information on how stars and galaxies formed; show us in much finer detail how stars and planets are born; and peer into the atmospheres of distant worlds, looking for signs of life.

It’s going to be absolutely epic.