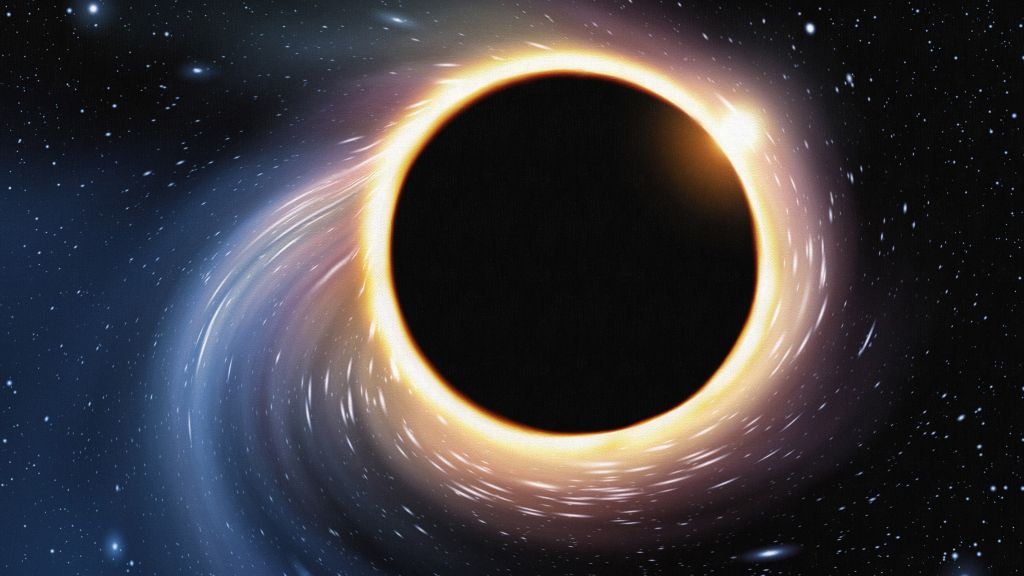 Paul M. Sutter is an astrophysicist at SUNY Stony Brook and the Flatiron Institute, host of Ask a Spaceman and Space Radio, and author of How to Die in Space. Sutter contributed this article to Space.com’s Expert Voices: Op-Ed & Insights.

The singularity at the center of a black hole is the ultimate no man’s land: a place where matter is compressed down to an infinitely tiny point, and all conceptions of time and space completely break down. And it doesn’t really exist. Something has to replace the singularity, but we’re not exactly sure what.

It could be that deep inside a black hole, matter doesn’t get squished down to an infinitely tiny point. Instead, there could be a smallest possible configuration of matter, the tiniest possible pocket of volume.

This is called a Planck star, and it’s a theoretical possibility envisioned by loop quantum gravity, which is itself a highly hypothetical proposal for creating a quantum version of gravity. In the world of loop quantum gravity, space and time are quantized — the universe around us is composed of tiny discrete chunks, but at such an incredibly tiny scale that our movements appear smooth and continuous.

This theoretical chunkiness of space-time provides two benefits. One, it takes the dream of quantum mechanics to its ultimate conclusion, explaining gravity in a natural way. And two, it makes it impossible for singularities to form inside black holes.

As matter squishes down under the immense gravitational weight of a collapsing star, it meets resistance. The discreteness of space-time prevents matter from reaching anything smaller than the Planck length (around 1.68 times 10^-35 meters, so…small). All the material that has ever fallen into the black hole gets compressed into a ball not much bigger than this. Perfectly microscopic, but definitely not infinitely tiny.

This resistance to continued compression eventually forces the material to un-collapse (i.e., explode), making black holes only temporary objects. But because of the extreme time dilation effects around black holes, from our perspective in the outside universe it takes billions, even trillions, of years before they go boom. So we’re all set for now.

Another attempt to eradicate the singularity — one that doesn’t rely on untested theories of quantum gravity — is known as the gravastar. It’s such a theoretical concept that my spell checker didn’t even recognize the word.

The difference between a black hole and a gravastar is that instead of a singularity, the gravastar is filled with dark energy. Dark energy is a substance that permeates space-time, causing it to expand outward. It sounds like sci-fi, but it’s real: dark energy is currently in operation in the larger cosmos, causing our entire universe to accelerate in its expansion.

As matter falls onto a gravastar, it isn’t able to actually penetrate the event horizon (due to all that dark energy on the inside) and therefore just hangs out on the surface. But outside that surface, gravastars look and act like normal black holes.

However, recent observations of merging black holes with gravitational wave detectors have potentially ruled out the existence of gravastars, because merging gravastars will give a different signal than merging black holes, and outfits like LIGO (the Laser Interferometer Gravitational-Wave Observatory) and Virgo are getting more and more examples by the day. While gravastars aren’t exactly a no-go in our universe, they are definitely on thin ice.

The universe: Big Bang to now in 10 easy steps

Let’s go for a spin

Planck stars and gravastars may have awesome names, but the reality of their existence is in doubt. So maybe there’s a more mundane explanation for singularities, one that’s based on a more nuanced — and realistic — view of black holes in our universe.

The idea of a single point of infinite density comes from our conception of stationary, non-rotating, uncharged, rather boring black holes. Real black holes are much more interesting characters, especially when they spin.

The spin of a rotating black hole stretches the singularity into a ring. And according to the math of Einstein’s theory of general relativity (which is the only math we’ve got), once you pass through the ring singularity, you enter a wormhole and pop out through a white hole (the polar opposite of a black hole, where nothing can enter and matter rushes out at the speed of light) into an entirely new and exciting patch of the universe.

One challenge: the interiors of rotating black holes are catastrophically unstable. And this is according to the very same math that leads to the prediction of the traveling-to-a-new-universe stuff.

The problem with rotating black holes is that … well, they rotate. The singularity, stretched into a ring, is rotating at such a fantastic pace that it has incredible centrifugal force. And in general relativity, strong enough centrifugal forces act like antigravity: they push, not pull.

The formation of an inner horizon sows the seeds for the destruction of the black hole. But rotating black holes certainly exist in our universe, so that tells us that our math is wrong and something funky is going on.

What’s really happening inside a black hole? We don’t know — and the scary part is that we may never know.

Learn more by listening to the episode “What really happens at the center of a black hole?“ on the Ask A Spaceman podcast, available on iTunes and on the Web at http://www.askaspaceman.com. Thanks to Andy P., Brittany, Jeff J., Robert S., Vladimir B., Jack S., @Grobillard, and James L. for the questions that led to this piece! Ask your own question on Twitter using #AskASpaceman or by following Paul @PaulMattSutter and facebook.com/PaulMattSutter.