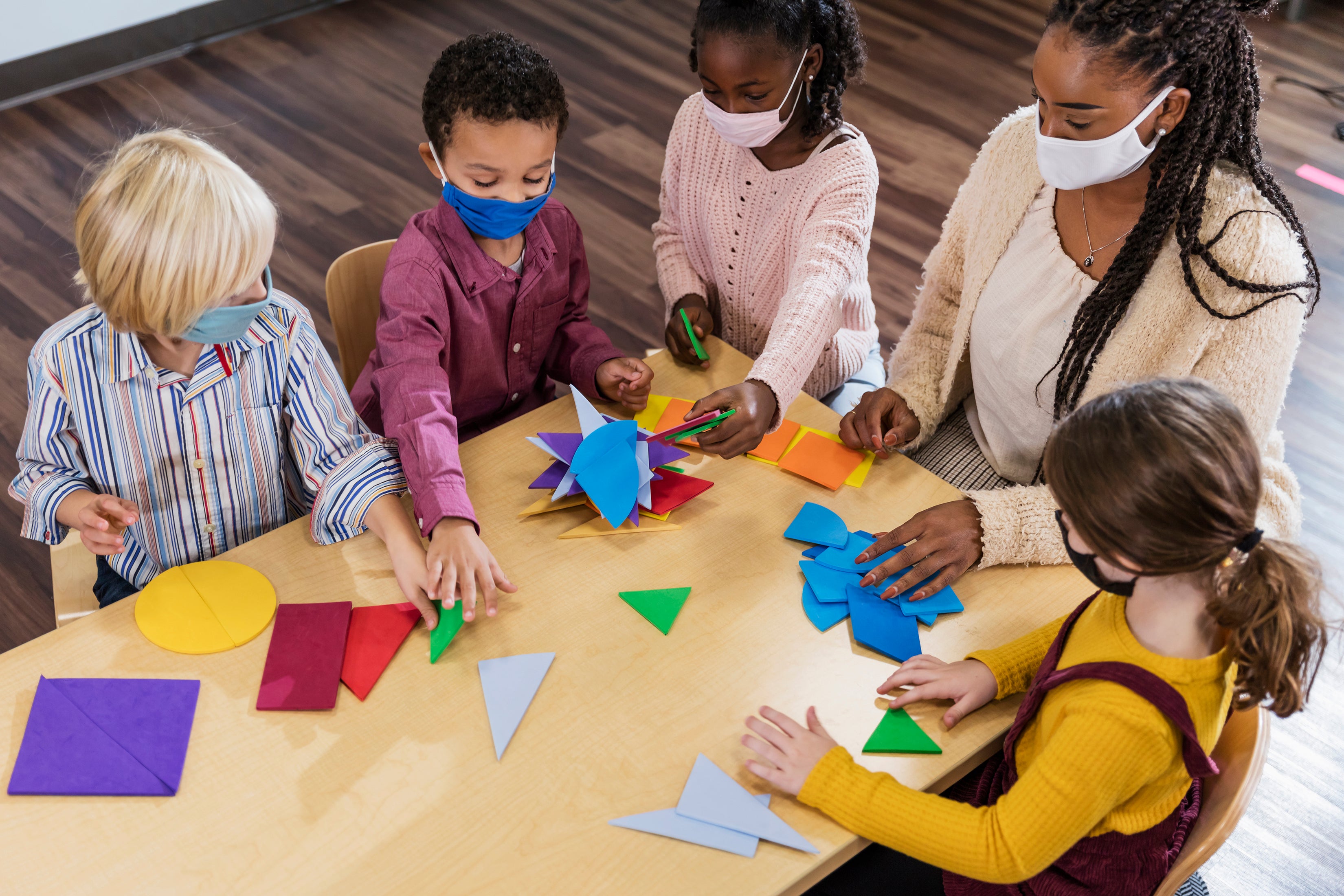 Last Friday the Centers for Disease Control and Prevention announced a pivot in its guidelines for indoor mask wearing that suggests that more than two thirds of Americans no longer need to wear masks—including children in schools. “We want to give people a break from things like mask wearing when our levels are low and then have the ability to reach for them again, should things get worse in the future,” said CDC Director Rochelle Walensky at a briefing with reporters.

The shift follows moves by a number of states to lift mask mandates in schools or other indoor spaces. The policy changes reflect a mix of political pressures and pandemic fatigue leading to a readiness in some segments of the general public to embrace a transition away from measures adopted to fight COVID. The trend has gained momentum as case counts have declined steeply in many areas of the country in recent weeks.

As the numbers have come down, the scientific community remains embroiled in a debate, complete with opposing advocacy groups bearing mirror-image names and Web sites. Some scientists and physicians think that masks ought to be optional, including for schoolchildren. Others argue that the push to lift restrictions is shortsighted and reflects nothing more than wishful thinking and insensitivity to the needs of the immunocompromised, the elderly and the communities hurt worst by the pandemic. “Everyone’s all over the place,” says Monica Gandhi, an infectious disease doctor and professor of medicine at the University of California, San Francisco. “They are attacking each other, and they are really angry.” (Gandhi is a proponent of lifting restrictions if certain guidelines are met.)

One flash point is schools: In January a group of physicians and scientists launched the Urgency of Normal, a campaign that calls for the lifting of school mask requirements, an end to school closures and the removal of other restrictions in schools. “We have forced children to bear the brunt of all of the restrictions in the name of trying to protect adults,” says Nicole Johnson, a pediatric critical care specialist at University Hospitals Rainbow Babies & Children’s Hospital in Cleveland, Ohio, who is part of the group. “Now that adults have full protection from serious illness with widely available vaccines, there is no reason to be putting this burden on children.”

That burden, as she and her Urgency of Normal colleagues see it, includes mental health challenges and what they view as occluded faces’ possible harms to language or social-emotional development. The group’s members advocate swift action. “The mental health crisis our children are having is very real, and it’s happening right now. So if we are going to wait before giving them normal back, I think we need a strong justification,” says Scott Balsitis, director of immunology at Gilead Sciences, a maker of remdesivir and other antiviral drugs, who is also part of the Urgency of Normal.

Within weeks of the debut of that group’s Web site, another collection of researchers and physicians countered with their own campaign, which they call the Urgency of Equity. It focuses on keeping children and communities—particularly low-income ones—safe from COVID. The Urgency of Equity’s online tool kit calls for the use of high-quality masks, testing and other measures, with an emphasis on protecting the most vulnerable people. “Normal should not mean accepting perpetually high rates of COVID-related illness, chronic disability, and death,” it states.

Public health experts in the Urgency of Equity say it is too soon to revert to prepandemic normalcy. “It’s not going to end tomorrow, and everything goes back to normal,” says Gregg Gonsalves, an epidemiologist at Yale University, who is part of the group. “We are still seeing waves. The pandemic has not stabilized yet. There are people making plans for the after-party.”

Some scientists outside the group agree with this sentiment. “I don’t think, as somebody who works on transmission, that we are at a point where transmission is low enough to remove mitigation strategies,” says Seema Lakdawala, a virologist at the University of Pittsburgh School of Medicine. “It is not time to remove mask mandates even at a statewide level.”

Until early in February, the number of children testing positive each week during the latest peak was greater than it was during any of the previous peaks of the two-year pandemic, says Nathaniel Beers, a pediatrician at Children’s National Hospital, who helped develop the American Academy of Pediatrics’s (AAP’s) pandemic guidance on schools. That guidance still calls for universal indoor masking in schools by staff and virtually all students aged two years and older.

For children, the risk of serious illness is low, but it is not zero. As of February 24, between 0.1 and 1.5 percent of children with COVID have gone to the hospital, according to data from 25 states and New York City collected by the AAP. Between August 1, 2020, and February 26, 2022, 114,310 children have been hospitalized with the disease, according the CDC’s COVID Data Tracker.

Another danger for children is “long COVID,” serious symptoms that linger for months after infection and may include trouble concentrating, fatigue and shortness of breath. And the future could bring worse outcomes for children the more SARS-CoV-2, the virus that causes COVID, is allowed spread. “As the virus continues to evolve in the human population, we cannot predict how it’s going to change the severity in different age populations,” Lakdawala says.

What’s more, relatively few children are vaccinated against COVID. About a quarter of children aged five to 11 years have received two of the shots, and children younger than five are not yet eligible for a COVID vaccine. Students in certain ethnic and racial minority groups are even less likely to have access to COVID vaccines.

A lot of communities in the U.S. do not have the vaccination rates to support ending restrictions in schools, says Tyler Black, a child and adolescent psychiatrist at the University of British Columbia, who is part of the Urgency of Equity. “By ending restrictions, there will be more deaths in children,” he says.

One major point of contention between the groups is the extent to which masks and other mitigation measures have helped or harmed children. Few if any experts dispute the existence of a mental health crisis. Last fall the AAP and two other pediatric health organizations declared a national emergency in child mental health, which they and the U.S. Surgeon General say has been made worse by the pandemic.

But many doctors and public health researchers argue that the main cause of any pandemic-related distress is COVID itself, not its mitigation. More than 200,000 U.S. children have lost a caregiver to the disease. And a new study estimates that at least five million children worldwide are now missing a parent or other caregiver because of the illness.

And this loss, Beers says, is likely to be a bigger factor in children’s worsening mental health than restrictions such as wearing a mask or social distancing. Gonsalves agrees. “This is a massive psychological event,” he says. “But saying it’s a piece of cloth or an N95 on your face that is the cause of your depression…: the data’s not there.”

It is also far from proved that masks harm either language or social development. And there is some evidence to the contrary. After reviewing the limited data on both sides of this issue, the CDC concluded that there is “no clear evidence that masking impairs emotional or language development in children.”

Another debate concerns how well masks work in the real-world classroom environment. The Urgency of Normal picks apart the various studies and determines that there is a lack of strong evidence that masks significantly stem transmission in schools. “If [masks] were preventing spread in schools, it was very little—not something we could detect on any sort of large scale,” says Tracy Høeg, a physician and epidemiologist affiliated with the University of California, Davis, who is part of the group.

Yet authors of several studies of masking in schools conclude that masks do help reduce transmission of SARS-CoV-2 in these institutions. The Urgency of Equity’s tool kit lists a dozen studies indicating that face coverings lower the spread of COVID in a variety of real-world settings. And there is plenty of physical evidence to show that masks work, particularly as part of an overall mitigation strategy.

To determine which communities need masks, the CDC’s revised guidelines establish three tiers of risk based on three measures: COVID case counts, COVID-related hospital admissions and hospital beds occupied by COVID patients. The latter two factors reflect a new emphasis on disease severity. By the CDC’s metrics, about 70 percent of people in the U.S. live in a community at “low” or “medium” risk for the disease and do not need to wear a mask indoors, including in schools. Before Friday, the CDC recommended universal masking in schools no matter how much impact COVID-19 was having on the community.

Gandhi, who was aligned with Urgency of Normal but dropped her affiliation because she wanted to use a metric for lifting restrictions, supports the new CDC guidance. She has been part of informal group of nine epidemiologists—at U.C.S.F., the University of Washington and Oregon Health & Science University—who have come up with their own metrics. This group’s proposed formula departs from the CDC’s mainly in that it explicitly includes vaccination rates and does not take into account case counts at all.

Gandhi differs with the CDC on one other issue, reflecting a viewpoint in line with some members of Urgency of Normal: she does not think required masking should be resumed in schools even if hospitalizations in their community go up. “A biological plausibility that [masks] block transmission is not sufficient evidence enough to impose a restriction like this again,” she says. “I believe strongly we can recommend one-way strong masks for vulnerable populations but cannot recommend mask mandates for entire populations again. I have expressed this to the CDC because of the mixed evidence: I think masks work on an individual basis, but they do not work in making the whole population mask.”

But instead of relaxing restrictions, Gonsalves says policy makers should discuss how to prepare schools for the possibility of a next wave—with a focus on the ones least able to ride it out. “Who is going to be ready?” he asks. It is going to be the rich school districts, he says: “They’ll buy up tests. They’ll make sure they have masks.” Other districts that lack the resources should be prioritized for assistance, Gonsalves says.

And to some extent, times may have permanently changed. What if COVID becomes just one of many infections that spike during the winter? Some experts say masking is still a smart strategy in that scenario. “To me, that saves hundreds of kids dying from infections and reduces overall public health burden,” says Lakdawala, who is considering making masks a permanent part of her own children’s winter attire. “I think it’s great—they haven’t gotten sick this year or last year.”