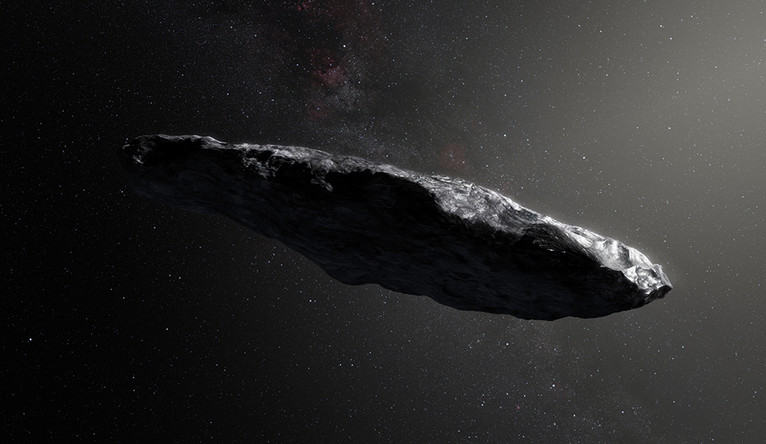 On Oct. 19, 2017, Robert Weryk, an astronomer at the University of Hawaii at Manoa, spotted an intriguing new object with the Panoramic Survey Telescope and Rapid Response System (Pan-STARRS1) in Hawaii. It was, from the moment of its discovery, a weird object — weird orbit, weird speed, weird properties.

The strange object, later dubbed ‘Ouamuamua, was the first known interstellar object to visit the solar system. But astronomers were able to observe the odd visitor for only 11 days before it appeared too small and too dim to be detected. Considering the scant information obtained from such a short observation window, the true nature of ‘Ouamuamua remains a mystery, even today.

‘Oumuamua, a Hawaiian word that roughly translates to “scout,” is an apt name; the object is an emissary, a representative of some distant (and unknowable) star system. It had been wandering the cold, empty interstellar depths of the Milky Way for hundreds of millions, or perhaps billions, of years, before encountering the sun.

‘Oumuamua isn’t large; its biggest side is between 10 and 100 meters (33 to 330 feet) wide; it could fit comfortably inside a football field.

Reflected sunlight from ‘Oumuamua continually dimmed and brightened, telling astronomers that the object was tumbling end over end every few hours. Based on that variation in the light, astronomers determined that ‘Oumuamua is much longer than it is wide, by a factor of five to 10, meaning it’s shaped like either a cigar or a pancake.

By the time ‘Oumuamua was detected, it was already on its way out of the solar system. Given the object’s incredible speed and steep angle relative to the rest of the system, ‘Oumuamua was not gravitationally bound to the sun.

Astronomers monitored ‘Oumuamua with a variety of ground- and space-based observatories for about 11 days. That’s it: 11 days. Those observations are all the information we’ll ever have about this mysterious visitor; ‘Oumuamua is already too distant and too dim to be seen with even our most powerful instruments, and no rocket could ever hope to catch up with it.

‘Oumuamua is perhaps the strangest object we have ever seen inside the solar system. No other known asteroid or comet has a shape that extreme (although, to be fair, our catalog of objects 100 meters or larger isn’t exactly complete). ‘Oumuamua has a dusty red color, which is similar to the hues of other deep-solar system objects. But it didn’t act like a comet, the most common small object at those distances from the sun.

The interstellar visitor entered the solar system with a velocity very close to the local standard of rest, which is the average velocity of stars in our neighborhood. However, most of those stars have individual velocities much higher than that. So why should ‘Oumuamua have something very close to the average number? It remains a mystery.

Lastly, on its way out of the solar system, ‘Oumuamua gave astronomers one more giant mystery: It appeared to be accelerating, moving away from the sun at a slightly faster pace with every passing day. This wouldn’t be the weirdest thing for comets, which can have abnormal acceleration profiles due to outgassing of materials. But observations of ‘Oumuamua revealed no such activity.

In the years since the original discovery, only one other interstellar visitor has been spotted. And that object, called 2I/Borisov, looked and acted like any other comet. Nothing like ‘Oumuamua has ever been seen before or since.

So what is ‘Oumuamua? The debate continues; speculation is ripe in such a data-poor environment. Harvard astronomer Avi Loeb has used the lack of data to propose that ‘Oumuamua is an alien spaceship. But considering intelligent aliens may be capable of doing whatever they want, this could be an explanation for pretty much any observation.

Astronomers have also offered a range of non-alien explanations. One idea is that perhaps ‘Oumuamua is a nitrogen iceberg that chipped off of a Pluto-like object long ago. However, Loeb and his colleague Amir Siraj, a Harvard undergraduate, said that’s impossible because pure nitrogen is very rare on Pluto and in the universe at large. They calculated that the mass of exo-Plutos required to generate a pure nitrogen ‘Oumuamua to be mind-bogglingly high.

Other researchers have suggested that perhaps ‘Oumuamua is a block of solid hydrogen, formed in the outskirts of a giant molecular cloud as a byproduct of solar system creation. Others hold that ‘Oumuamua is a comet after all — an alien one that got booted from its native solar system by a gravitational interaction, or one that formed here, in our own solar system, and then migrated far outward before circling in for one last dance.

Ultimately, we’ll never know. And maybe, like that strange visitor, we should just move on.

Learn more by listening to the “Ask a Spaceman” podcast, available on iTunes and askaspaceman.com. Ask your own question on Twitter using #AskASpaceman or by following Paul @PaulMattSutter and facebook.com/PaulMattSutter.