In a slow-moving universe, asteroids give us a rare chance to see things moving in real time. We have such a chance coming right up on the evening of Tuesday, January 18th, when 1.1-kilometer asteroid (7482) 1994 PC1 passes 1.23 million miles (1.98 million kilometers) from Earth.

This is about five times the distance from Earth to the Moon, and just a shade over the distance to the anti-sunward Earth-Sun Lagrange 2 point, soon to be the home of the James Webb Space Telescope.

Fortunately, both Earth and said space telescope are safe from the asteroid on this pass, and will remain so for centuries into the foreseeable future. The asteroid was discovered on the night of August 9th, 1994 by astronomer Robert McNaught observing from the Siding Spring Observatory.

The Apollo asteroid is an Earth-crosser, with a perihelion interior to our own at 0.9 Astronomical Units (AU) from the Sun, and an aphelion out in the asteroid belt at 1.8 AU, with an orbital period of 572 days. It’s orbital inclination of 33.5 degrees relative to the ecliptic makes it pass far from Earth on most years.

Near-Earth #asteroid 1994 PC1 (~1 km wide) is very well known and has been studied for decades by our #PlanetaryDefense experts. Rest assured, 1994 PC1 will safely fly past our planet 1.2 million miles away next Tues., Jan. 18.

Fun fact: looking back through sky plates, 1994 PC1 actually turns up in images all the way back to 1974.

1994 PC1 is a S-class stony-type asteroid, and is only slightly larger than another well-known NEO asteroid, 101955 Bennu, the target of NASA’s Osiris-Rex sample return mission, which returns to Earth with its precious cargo late next year. 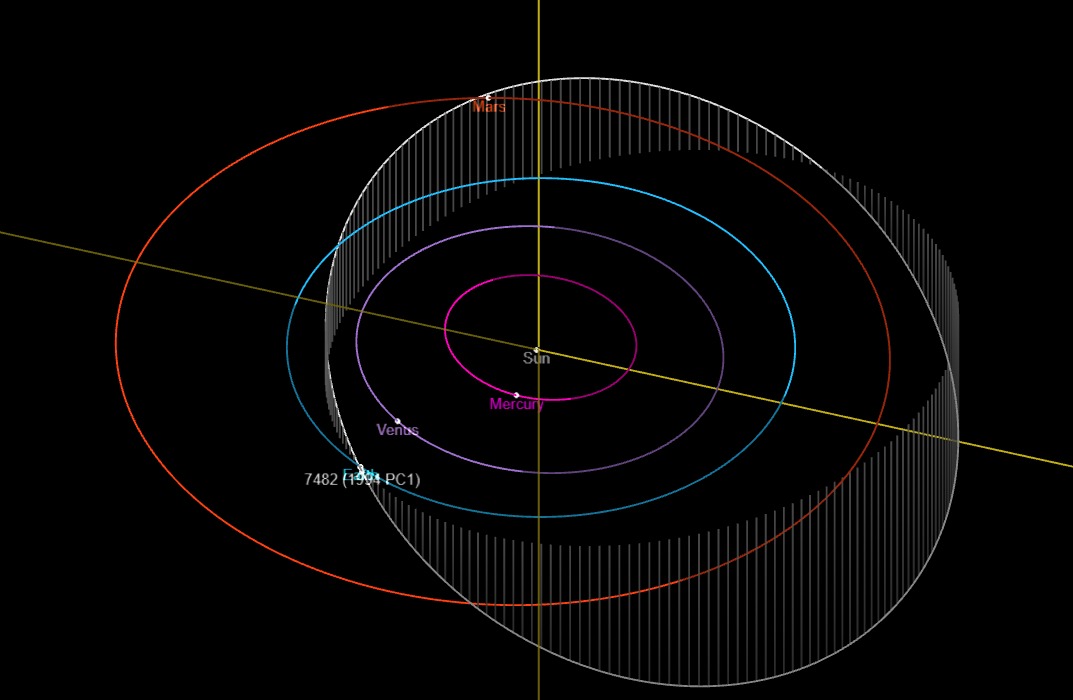 This week’s close approach gives observers a chance to see the asteroid for themselves.

At its closest on the night of January 18th at 21:51 Universal Time (UT), 1994 PC1 will be straddling on the Cetus/Pisces border and moving at a blistering 2 degrees an hour (spanning a section of sky four times the size of tonight’s Full Moon, per hour) or 2 arc minutes a minute.

That’s fast enough to see the motion of the speedy asteroid versus the starry background after watching it at the eyepiece for just a minute or two. At its brightest, 1994 PC1 should flirt with magnitude +9 or so, making it easily visible with a small telescope or perhaps, binoculars.

I remember the thrill of seeing asteroid 4179 Toutatis on its close pass in 2004. That passage was very similar to this week’s, watching as the space rock silently crept across the starry background.

The good news is, you can start hunting for 1994 PC1 tonight: the asteroid is still a respectable +12th magnitude plus on either evening before or after closest approach, January 17th or January 19th. Also, unlike closer passes, parallax versus observer location won’t play too much of a factor in the asteroid’s true position in the sky.

To catch it, you’ll need a telescope capable of precisely pointing at coordinates in right ascension and declination. You can get these ephemerides for your time and location by inputting ‘1994 PC1’ at NASA/JPL Horizons site.

The night of Monday, January 17th finds asteroid 1994 PC1 low to the south at dusk on the border of the southern hemisphere constellations of Fornax and Eridanus. Tough, though not an impossible target for North American observers.

The key night of Tuesday, January 18th sees the asteroid making its closest pass by Earth for this century. Standing on the surface of the asteroid Tuesday night, you’d see the Earth as a 22′ half-full disk, slightly smaller than a full moon. 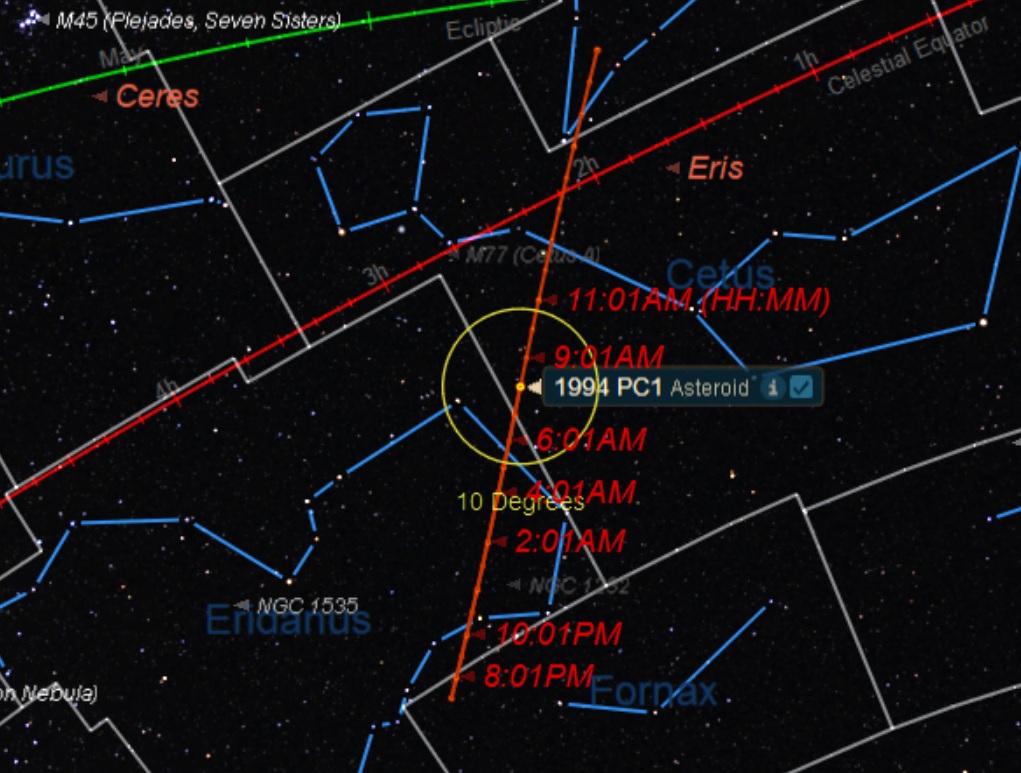 24-hour path of asteroid for January 18th, in one hour increments. (Starry Night)

Though the precise time of closest approach favors Africa and European longitudes, North America also gets a good look at dusk. Another good approach to tracking the asteroid is to know when it’s going to pass near a bright star, stake out the position, and watch at the appropriate time.

Once such opportunity occurs in the hours around 21:05 UT Tuesday night, when 1994 PC1 passes 43′ from the +3.8 magnitude star Alrescha (Alpha Piscium). 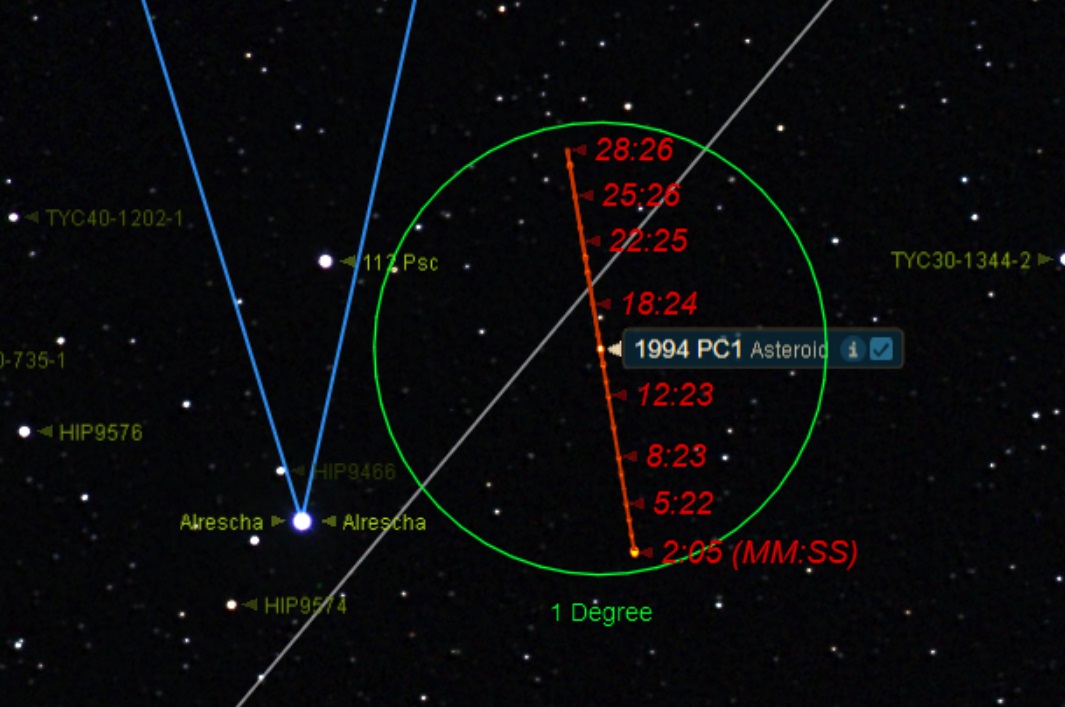 Wednesday night January 19th sees the asteroid much farther north in the constellation Andromeda. Though now almost 1.7 million miles distant, Wednesday also has the advantage of offering a slim window for viewing after twilight ends, and before the waning gibbous Moon rises.

Clouded out? Astronomer Gianluca Masi and the Virtual Telescope Project has you covered, with a live webcast following 1994 PC1 starting at 20:00 UT on the 18th.

Luckily, asteroid 1994 PC1 won’t offer us the same doomsday scenario as the recent comedy Don’t Look Up… simply a good show. Good luck and clear skies on your quest to spot asteroid 1994 PC1.