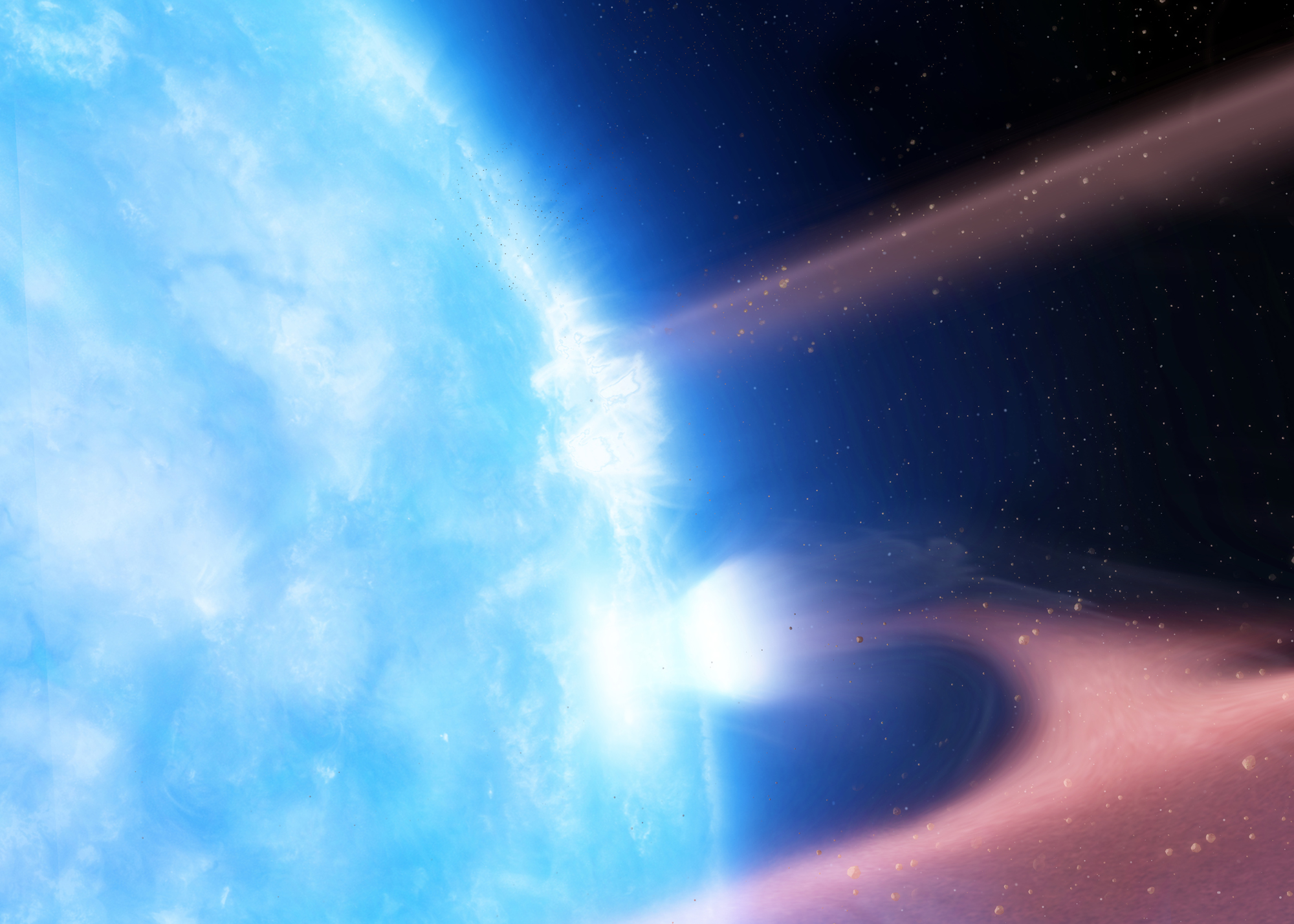 Distant X-rays may be the most direct evidence yet of the remains of a disintegrated planet colliding with the corpse of a star, a new study finds.

White dwarfs are the cool, dim cores of dead stars that are left behind after average-size stars have exhausted their fuel and shed their outer layers. They are usually about the size of Earth, and our sun will one day become a white dwarf, as will about 97% of all stars.

Previous research found the atmospheres of 25% to 50% white dwarfs possessed traces of elements heavier than hydrogen and helium, such as iron, calcium and magnesium. This was strange, as “white dwarfs are extremely dense objects, and have a surface gravity about 100,000 times stronger than on Earth,” study lead author Tim Cunningham, an astrophysicist at the University of Warwick in England, told Space.com. “This causes heavy elements to sink out of sight on very short timescales. This means that the observed heavy elements at the surface must have recently arrived from outside the white dwarf.”

Astronomers had suggested these heavy elements were remnants of planets, asteroids or comets that had rained onto these stellar remnants. Prior work had also detected signs of planetary fragments and disks of debris orbiting around white dwarfs, lending credence to the idea that matter can plummet onto their surfaces.

“Measuring how much and how quickly remnant planetary material falls onto the surface of a white dwarf has many important implications, including for planet formation and exoplanetary material compositions,” Cunningham said.

However, although the heavy elements in white dwarf atmospheres suggested the dead stars had consumed planetary remnants in the recent past, and the rocks orbiting them hinted they could do so in the future, there was no direct evidence white dwarfs were actively devouring such rocky material at the time.

In the new study, researchers analyzed the white dwarf G29-38. This stellar remnant is about 60% the mass of the sun and is located about 50 light-years from Earth, in the constellation Pisces.

Previous research found that matter falling onto white dwarfs from companion stars could emit X-rays. However, until now, there was no evidence of such X-rays from planetary material slamming into white dwarfs.

Detecting any X-rays from white dwarfs is very challenging, as the small amount of X-ray radiation that reaches Earth can be lost amongst other bright sources of X-rays in the sky. So, the astronomers took advantage of NASA’s Chandra X-ray Observatory, which is normally used to detect X-rays from black holes and neutron stars that are accreting new material, to analyze G29-38.

Using Chandra, the researchers could isolate G29-38 from other X-ray sources. For the first time, they viewed X-rays from an isolated white dwarf.

“The exciting thing with our X-ray detection is that we are detecting emission from the moment this planetary debris hits the stellar surface, providing the first direct evidence that these systems are currently accreting,” Cunningham said.

The brightness of the X-rays from G29-38 suggested about 1,800 tons (1,630 metric tons) of matter was falling onto the white dwarf every second. The scientists noted this accretion rate deduced from X-ray data matched previous estimates of accretion rates inferred from the heavy elements seen in white dwarf atmospheres. “We now have an independent way to check decades’ worth of theoretical models,” Cunningham said.

Now that astronomers have detected X-rays from a white dwarf accreting planetary material, “I hope that we will find more,” Cunningham said. “The main issue here is that these sources are very faint compared to other X-ray sources such as accreting black holes and neutron stars. This means we need long observations to detect them. But the good news is that there are more sensitive X-ray instruments planned to be launched, such as ATHENA [the Advanced Telescope for High Energy Astrophysics, planned by the European Space Agency], which will be indispensable for this field of research.”

The scientists detailed their findings online Feb. 9 in the journal Nature.