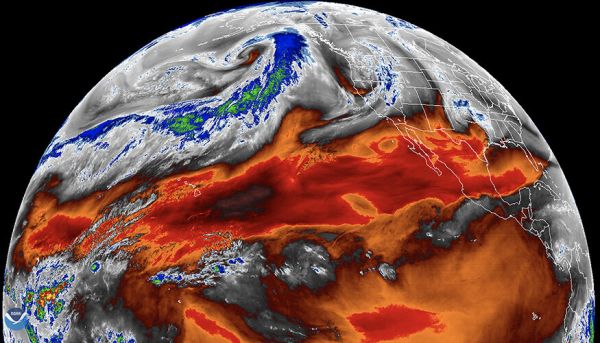 2021 was another record-setting year, ranking as the sixth hottest year on record. Following a trend, these past eight years have also been the eight hottest years on record, experts revealed Thursday (Jan. 13).

In an annual call to discuss climate change and the year’s climate data, experts from NASA and NOAA (the National Oceanic and Atmospheric Administration) shared today that 2021 was the sixth-warmest year for Earth since records began in 1880. And the past eight years have all set such records. But warming temperatures mean more than just hotter summer days.

2021 also brought with it the consequences of those rising temperatures, including melting sea ice, powerful storms around the globe and other natural disasters. This year, at least 600 people died in the U.S. alone as a result of these disasters, the highest such casualties seen in a decade, physical scientist Russel Vose of NOAA said during the call.

Surface temperatures of both land and oceans on Earth measured 1.51 degrees Fahrenheit (0.84 degrees Celsius) above the 20th-century average in 2021, according to NOAA. It was also the 45th year in a row that global temperatures were above this average.

But it wasn’t just surface temperatures heating up; ocean heat content also hit a record high in 2021. Ocean heat content is “basically the total amount of warmth, or energy, stored in the ocean,” Voss explained. Once this excess heat is absorbed by the ocean, this energy is stored indefinitely.

In 2021, ocean heat content was “the highest since records began six decades ago,” Voss said. “It’s an incomprehensibly large amount of energy, in my mind.”

With record-setting temperatures, the year also had “no shortage of extremes,” one of the slides from NASA and NOAA that accompanied the call read.

The slide detailed a handful of examples of extreme events around the world related to our planet’s current climate crisis.

These examples include above average hurricane activity in the Eastern North Pacific, extreme heat waves in the Northwestern U.S.,Western Canada, Southern Europe and more, the strongest maximum wind speeds ever recorded (during Typhoon Surigae) and much, much more.

“But this is the story here: the slide does not even begin to show the extremes that took place in 2021,” Voss said.

“Unfortunately, we should expect to see more of these types of extremes in a warming world,” Voss said. “Some of the events this year were probably not even possible without global warming, or at least they were made much worse by it.”

When we discuss climate change, the Arctic is quick to pop into the conversation. As Arctic sea ice melts, it affects sea levels around the world and can worsen flooding and increase the likelihood and severity of natural disasters.

And unfortunately, the Arctic has warmed more than three times faster than the global average over the last 30 years, climatologist and climate modeler Gavin Schmidt, director of the NASA Goddard Institute for Space Studies in New York, said during the call.

“That’s a very dramatic change locally,” Schmidt said, adding that not only do rising Arctic temperatures melt sea ice and increase sea levels but they can also melt permafrost. This releases carbon dioxide and methane, two powerful greenhouse gases, into the atmosphere. Since these gases are fueling climate change, this worsens the problem that causes the rising temperatures in the first place.

There is no doubt

Climate change is a politicized issue. But there is a strong scientific consensus about both why it is happening and how it is progressing.

As Schmidt and Voss showed in their presentation, different institutions have been studying Earth’s climate with different methodologies over time and yet, they keep getting the same result. In a graph showing temperatures rising over time, data from NOAA matched up almost perfectly with data collected in different ways from a number of other institutions and research groups.

Despite the differences in how they collected and analyzed dthat data, “they tell the same basic story,” Voss said. This gives “much greater confidence in the result,” he added.

As Schmitt discussed in the call, while Earth’s climate naturally fluctuates over long time spans, the changes we’re seeing now are definitively caused by the large amounts of greenhouse gases humans are putting into the atmosphere. Everything from burning fossil fuels in industrial processes to power generation, deforestation, oil and gas operations and more are causing this problem.

Climate change’s existence and cause continue to be validated time and time again by data such as that in this annual report.

But, as Schmitt told Space.com on the call, Earth is not a lost cause. We still have the power to fix things, or at least keep them from getting worse.

“What we have learned is that temperatures will keep on rising, as long as we keep increasing the amount of greenhouse gases in the atmosphere,” Schmidt said. But, “if we get to net-zero for carbon dioxide, and we reduce the other greenhouse gases as well, then we can stabilize the temperatures.”

“It’s not going to cool, but we wouldn’t keep getting worse,” he said, adding that both reducing greenhouse gas emissions and increasing the absorption of those gases can make a difference, and there are a multitude of ways to do that.

“What we see, because of the cumulative nature of carbon dioxide … every little bit that you don’t release reduces the temperature in the future,” Schmidt said. “And so every little bit counts.”