Early, accurate, and simple diagnosis is important in just about every health condition you could name, and that includes heart disease. New research now suggests straightforward eye scans could identify patients with an increased risk of cardiovascular problems later on in life.

If this method of diagnosis can be developed, it would be a big deal – these scans are quick, non-invasive, and reliable, and the earlier heart disease risk can be identified, the more doctors and their patients can do to help prevent it.

Key to the new approach is a deep learning algorithm – a type of neural network-based artificial intelligence (AI) learning method that can be trained on large data sets to spot specific patterns.

In this case, the researchers trained it to look for tiny changes to the blood vessels in the retina, a link that’s already been widely discussed in medical literature before. 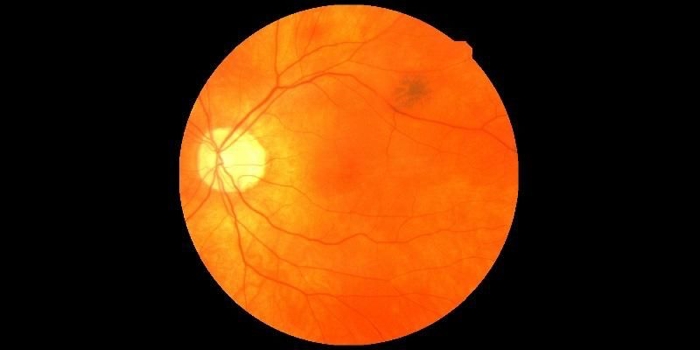 In a new paper describing their results, the team reports their tool was able to predict the risk of future myocardial infarctions with an accuracy of roughly 70 percent.

To build the tool, retinal scans and cardiac scans from 5,663 people in the UK Biobank database were analyzed by computer software, with the system programmed to link variations in one scan with variations in the other.

After going through the training process and learning the patterns that emerged, the AI was then smart enough to correlate heart health from blood vessels in the retina: specifically, the size and pumping efficiency of the heart’s left ventricle, which has already been linked to an increased likelihood of heart disease.

This estimation was combined with data covering age, sex, and basic demographic information to come up with an overall risk assessment. This could eventually be used as a secondary referral method, the researchers suggest.

“The AI system is an excellent tool for unravelling the complex patterns that exist in nature, and that is what we have found – the intricate pattern of changes in the retina linked to changes in the heart,” says Sven Plein, a professor of cardiovascular imaging at the University of Leeds.

At the moment, evaluating the left ventricle – one of four chambers in the heart – requires expensive tests that need to be carried out in a hospital. For many people across the globe, that means issues of access and availability.

Retinal scans, however, are already routinely taken at optician clinics, so an AI analysis for heart disease risk could be added on top. Those at high risk of developing cardiovascular problems could then be referred to specialist health professionals.

With millions of people dying every year of cardiovascular-related diseases around the world – the rate is one person every 36 seconds in the US alone – a system like the one proposed has the chance of making a substantial difference, though more research and data will be required to make this happen.

“Cardiovascular diseases, including heart attacks, are the leading cause of early death worldwide and the second-largest killer in the UK,” says Alex Frangi, chair in computational medicine at the University of Leeds.

The research has been published in Nature Machine Intelligence.