An ancient temple dating from the early centuries of Buddhism has been unearthed in the Swat Valley in northern Pakistan – part of the ancient Gandhara region that was conquered by Alexander the Great and gave rise to a mixing of Buddhist belief and Greek art.

Archaeologists think that the temple dates from about the middle of the second century BCE, at a time when Gandhara was ruled by the Indo-Greek kingdom of northern India, and that it was built above an earlier Buddhist temple that may have dated from as early as the third century BCE.

That means people would have built the older temple within a few hundred years of the death of the founder of Buddhism, Siddhārtha Gautama, who lived in what is now northern India and Nepal between about 563 BCE and 483 BCE.

The excavated remains of the temple found so far, near the center of the modern town of Barikot, are over 10 feet (3 meters) tall and consist of a ceremonial platform topped by a cylindrical structure that housed a conical or dome-shaped Buddhist monument called a stupa. 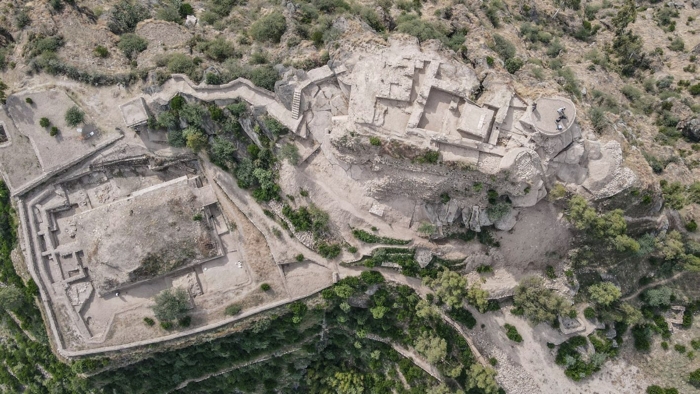 Above: Much of the work of the archaeologists has been to excavate the ancient fortress and another temple at the “acropolis” on the outskirts of Barikot.

The temple complex, which was built and reconstructed several times, also included a smaller stupa, a cell or room for monks, a staircase, the podium of a monumental pillar or column, vestibule rooms, and a public courtyard that looked out onto an ancient road.

Related: What is the oldest known archaeological site in the world?

Radiocarbon dating will establish precise dates of the structures, but the temple at Barikot is clearly one of the earliest Buddhist monuments ever found in the ancient Gandhara region, Luca Maria Olivieri, an archaeologist at Ca’ Foscari University of Venice and the International Association for Mediterranean and Oriental Studies (ISMEO) who led the excavations with Pakistani and Italian colleagues, told Live Science.

Italian archaeologists, who have been working in Swat since 1955, began the excavations at Barikot in 1984.

Their mission had been to preserve the important archaeology of the city by renting vacant land and excavating as much of it as possible, thereby protecting it against urban sprawl and clandestine archaeological excavations that sought to recover artifacts to sell in the foreign antiquary markets, he said. 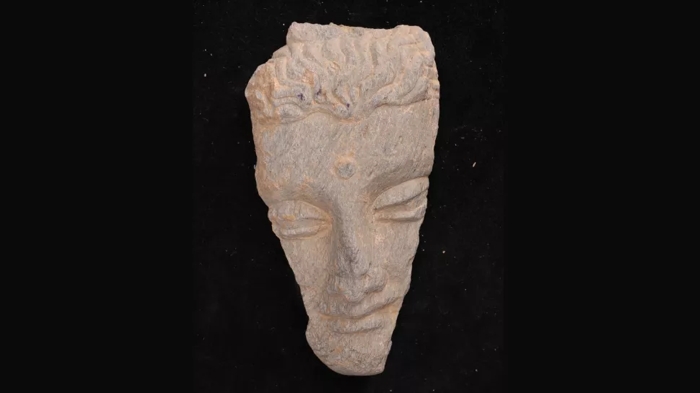 Above: Thousands of ancient artifacts have been unearthed in the excavations at Barikot, including this face of a Buddha carved in gray schist.

Until a few years ago, the excavations at Barikot had included the southwestern districts of the city and the acropolis – but not the city center, where the land rental costs are very high, he said. (The land at the Barikot sites is often privately owned, and renting it under terms that allow the excavations is simpler and less expensive than buying it.)

But the newly discovered temple was found on land acquired by the provincial archaeological authorities near the center of the city, which enabled the team to begin excavations there in 2019. Pits made by looters had already suggested something important might be buried there.

“For years, we had been watching what came out of the foundation trenches of modern houses, agricultural excavations and the pits left by clandestine digging,” Olivieri said. “[So] there were hints that there was a large monument there.”

The temple was located along an ancient road leading to the ancient city’s main Buddhist monument, a 65-foot-wide (20 m) stupa that was revealed by public works a few years ago; it is now the site of an electricity pylon.

In addition to the architectural features of the buried temple, archaeologists have discovered more than 2,000 artifacts at the site, including coins, jewels, seals, pottery pieces, stonework and statues, some of which bear ancient inscriptions that can be used to date them, Olivieri said.

Barikot is mentioned as “Bazira” or “Beira” in classical sources from the time of Alexander the Great, who conquered the already ancient Gandhara kingdom in 327 BCE. Its name meant “the city of Vajra”, referring to an ancient king mentioned in “The Mahabharata”, a Sanskrit epic poem that is thought to relate events from about the ninth and eighth centuries BCE.

Alexander was the king of Macedon in Greece, and he led military campaigns east against the Persian Empire from 334 BCE., staging an invasion of northwestern India – his farthest conquest – in 326 BCE.

Alexander eventually turned back toward Europe at the demand of his homesick troops, but he died at Babylon in 323 BCE, probably from a disease such as malaria but possibly from poisoning.

His generals then divided up his territories; the region of Bactria to the north of Gandhara became ruled by kings of Greek descent, while Gandhara for a time reverted to native Indian rule under the Maurya Empire.

Olivieri said Buddhism was already present in Gandhara by the time of Menander I, a descendent of the Greek kings of Bactria, who established the Indo-Greek kingdom in about 165 BCE and took over the region, but it may have been limited to the region’s elites.

Later, Buddhism became much more widespread, and Swat became a sacred center for the religion, especially during the Kushan Empire from about 30 CE to 400 CE, when Gandhara became famous for the Greco-Buddhist style that portrayed Buddhist subjects with the techniques of Greek art.

Swat also has a temperate microclimate, which allows two harvests every year – in spring and late summer – so ancient Barikot was an important center for the management of the region’s agricultural surplus.

As a result, Alexander probably used the region as a “breadbasket” to provision his armies before continuing their military campaign south to India, according to a statement from Ca’ Foscari University of Venice.

Olivieri said the Italian archaeological mission had wrapped up its latest season of excavations at Barikot, but the team will return later this year to make further investigations of the site and hopefully reveal more of the ancient temple.