A thorough review of 300 years of research, and an exceptionally preserved fossil, have given us what paleontologists say is the most up-to-date reconstruction yet of an ancient beast.

Living alongside dinosaurs during the Mesozoic Era, ichthyosaurs were marine reptiles that swam and hunted in Earth’s oceans. Resembling reptilian dolphins, these fascinating animals thrived for some 160 million years before going extinct, and their fossil record is rich and glorious.

More recently, however, paleontologists have also been discovering preserved soft tissues, which gives a much larger pool of information to draw upon when trying to figure out what ichthyosaurs looked like. This information, in turn, can help us understand how the beasts lived.

Led by paleontologist Mats Eriksson of Lund University in Sweden, a team has collated and analyzed previous research on ichthyosaurs – it means “fish lizard” – in a bid to make future research more accessible.

“Herein,” they wrote in their paper, “we present a review of ichthyosaur research and lifestyle iconography with particular focus on soft-tissue structures and inferences made from these, including aspects of coloration and thermoregulation.”

Of particular interest to the researchers was a fossil found in the Posidonia Shale, a Lagerstätte fossil assemblage in Germany. This almost complete Jurassic specimen is exceptional, and other researchers used it to gain insight into what ichthyosaurs looked like and how they lived. 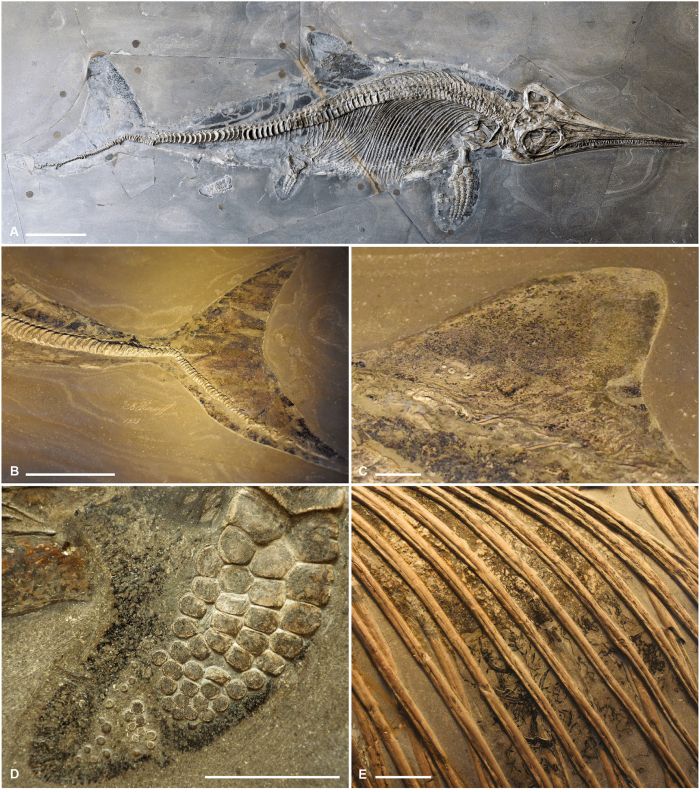 “Our reference point was a fish lizard that was found in Holzmaden, Germany,” explained paleontologist Johan Lindgren of Lund University. “This fossil has previously been the subject of an extensive study on the biology and coloration of fish lizards, which I did together with Mats and several other colleagues, and was published in Nature.”

Armed with a plethora of fossils, as well as the previous research, the team enlisted artist Esben Horn to sculpt a life-sized reconstruction of the ichthyosaur species Stenopterygius quadriscissus found in the Posidonia shale.

The process took around a year and involved clay sculpture and 3D printing. The resulting animal is smooth-skinned, like leatherback turtles (Dermochelys coriacea), a present-day marine reptile. Previous studies concluded that, like other marine reptiles, this species had lost its scales during its evolutionary transition to the ocean.

It also is sculpted as though protected by a layer of blubber, evidence of which has been found in a German Stenopterygius fossil; this thick layer of fat would have helped insulate the ichthyosaur from cold temperatures. Ichthyosaur fossils have also shown evidence of melanosomes, cellular organelles that contain dark pigment that would have provided UV protection. The tiny teeth, too, have been found in real fossilized ichthyosaurs.

The result, the researchers said, is a brilliant meeting of science and art, and the most up-to-date representation of an ichthyosaur yet. Although it’s possible that more information will come to light in the future, the team doesn’t imagine anything will significantly change.

“Our reconstruction is the scientifically most modern, and hopefully correct, interpretation of what these animals looked like,” Eriksson said. “It will be valuable for students and researchers who want to learn more about the iconic fish lizard.”

The research has been published in Earth-Science Reviews.