An asteroid discovered in the 19th century has just been identified as the most crowded we’ve ever found.

It’s called 130 Elektra, or just Elektra for short, and astronomers have just discovered that it has not one, nor two, but three smaller satellite companions, or moons. That not only makes it the most numerous asteroid system known to date, but demonstrates how we might find other faint, hard-to-see asteroid moons in the future.

“Elektra is the first quadruple system ever detected,” wrote a team of astronomers led by Anthony Berdeu of the National Astronomical Research Institute of Thailand in their paper.

“This new detection … shows that dedicated data reduction and processing algorithms modeling the physics of the instruments can push their contrast limits further.”

It’s not unheard of for asteroids to have smaller companions, although it is pretty rare to spot them. Of the over 1,100,000 asteroids we’ve discovered, over 150 are known to have at least one moon.

There’s a good reason it takes a while to find these satellites. Asteroids are small and only dimly lit at the best of times. Anything even smaller that might be orbiting an asteroid is going to be dimmer, fainter, and possibly vastly outshone by its parent asteroid.

The smaller and closer the moon is to the asteroid, the harder it’s going to be to see. It’s very similar to the reason why it’s hard to directly see exoplanets orbiting other stars. 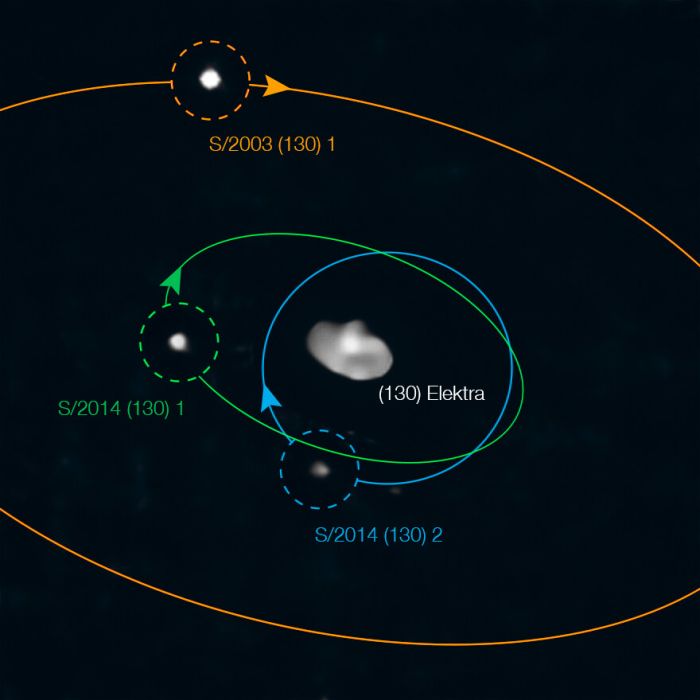 To find it, Berdeu and his colleagues took archival data from the SPHERE instrument attached to the European Southern Observatory’s Very Large Telescope, and ran it through a newly developed data reduction pipeline to remove noise from the raw data with high efficiency.

They also used data processing algorithms to help model the extended glow around the asteroid, called a halo, and remove it.

Once the data had been through these processes, the tiny third moon of Elektra emerged.

Although the team was able to obtain some basic information on S/2014 (103) 2, there remains a lot of uncertainty about its motion around Elektra. In addition, we don’t have a lot of information about how these systems form.

A study last year found that the two moons of an asteroid named Kleopatra probably formed from dust ejected by the main body, but we don’t know how common this might be compared to other formation mechanisms.

These might include rocks getting ejected during an impact event, or even capture of small passing rocks in the asteroid’s gravitational field.

“The discovery of the first quadruple asteroid system slightly opens the way for understanding the mechanisms of the formation of these satellites,” the researchers wrote in their paper.

Moreover, their techniques could be used in future studies to find even more asteroid moons that could further elucidate the phenomenon.

The research has been published in The Astrophysical Journal Letters.