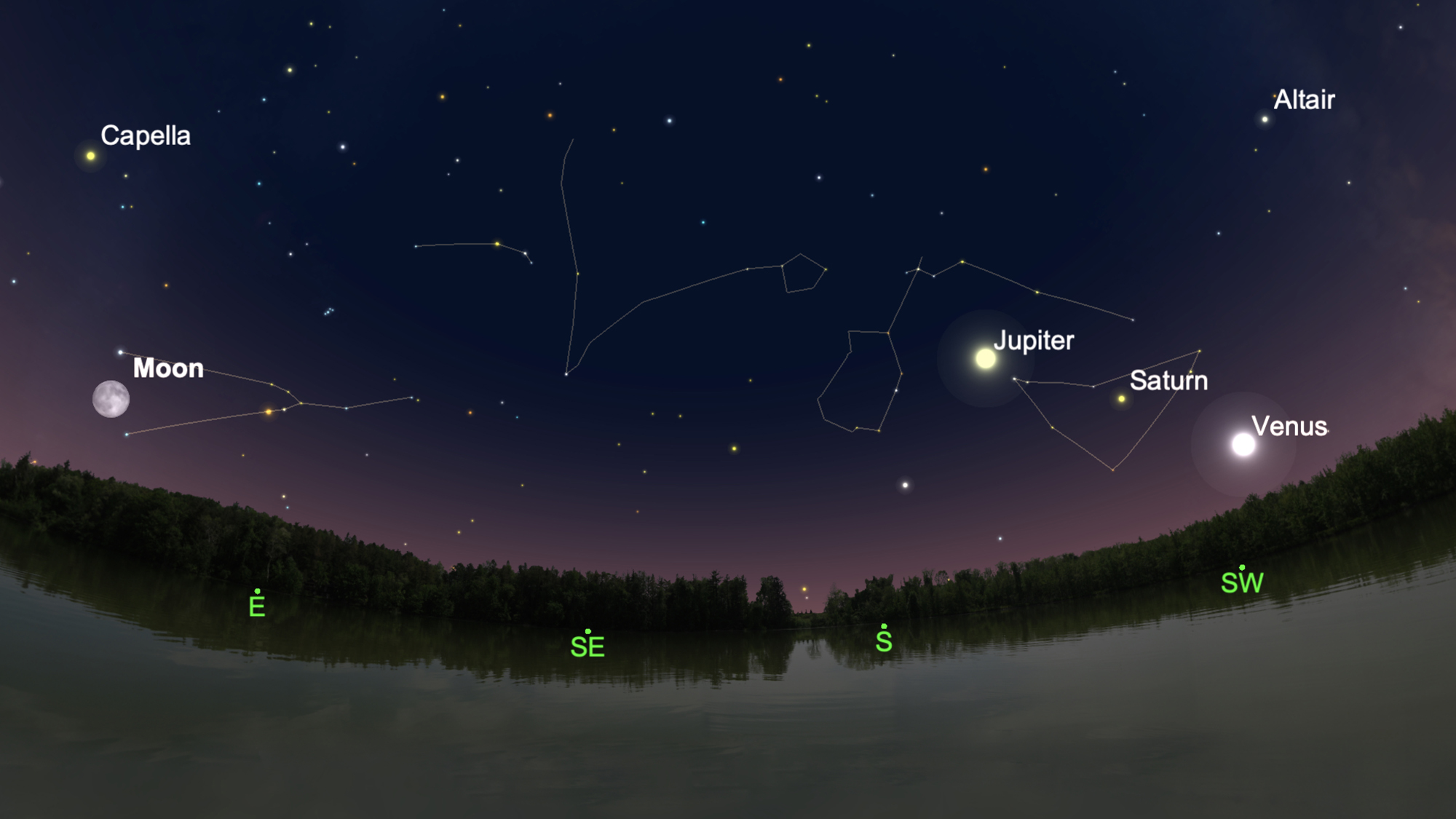 December’s full moon on Saturday (Dec. 18), the last of the year, will usher in the winter constellations and notably, three naked-eye planets in the evening.

The timing of lunar phases depends on the moon’s position relative to Earth; a full moon occurs when the moon is exactly opposite Earth from the sun. That means the hour it happens depends on the time zone; in the UK, it will happen at 4:36 a.m. on Dec. 19, while in Cape Town, South Africa, it will occur at 6:35 a.m. that day.

Full moon calendar 2021: When to see the next full moon

According to the Old Farmer’s Almanac, the December full phase is called the Full Cold Moon, and if you live in the Northern Hemisphere’s mid-latitudes, the name is no mystery. The sun this time of year sets early — per timeanddate.com, it will do so at 4:30 p.m. in New York City on Dec. 18 — and the sky gets dark by about 5:30 p.m.

If one looks in the southwest at about that time on Dec. 18, the rising full moon will be to the left. Three planets — Venus, Saturn and Jupiter — will form a roughly straight line from southwest to south going up at about a 45-degree angle relative to the horizon, with Jupiter the highest and Venus closest to the horizon.

Venus will only be about 10 degrees above the horizon by that point, but it is so bright that even in relatively poor conditions — a cityscape with streetlights, for example — it can still be seen. Saturn will be about 20 degrees high and to the left of Venus, and Jupiter about 32 degrees and to the left of Saturn. (Your clenched fist held at arm’s length covers about 10 degrees of sky.) Venus is the first to set at about 6:40 p.m. local time, Saturn follows at 7:50 p.m. and Jupiter brings up the rear at 9:20 p.m.

Mars, meanwhile, rises at about 5:28 a.m. on Dec. 18, according to Heavens-Above. In the constellation Scorpius, it will be visible for a good hour or more before the sun rises at 7:15 a.m. By 6:45 a.m., when the sky is starting to get light, Mars will be 13 degrees above the southeastern horizon in mid-northern latitudes.

At this point in December, the Northern Hemisphere winter constellations are prominent — the “Dog Star” Sirius, the brightest star in the sky, is above the horizon by 8 p.m. in New York on Dec. 18, and Orion is well up in the southeast. Orion faces Taurus the bull, who appears to be charging him from above, and to the left of the bull is Gemini, the Twins.

Looking up from Gemini, toward the north, one can see Auriga, the Charioteer, and Capella, the brightest star in that constellation. Early in the evenings, the Big Dipper will be low in the northeast, but from anywhere north of Savannah, Georgia, Cairo, or Shanghai, the Big Dipper is circumpolar — it never sets.

Night sky December 2021: What you can see this month (maps)

As the night progresses, other constellations of the zodiac become evident, though they are hard to see from city locations. Cancer, the Crab, for example, is just east of Gemini, but it’s faint and difficult to spot in a brightly lit city. By 11:30 p.m. in mid-northern latitudes, Leo is above the horizon. By that point, high in the south-southeast one can see Orion, Canis Major and Canis Minor — the Hunter and his two dogs — forming a rough triangle of bright stars: Procyon in Canis Minor (the Little Dog), Sirius in Canis Major (the Big Dog) and Betelgeuse, Orion’s shoulder.

In the Southern Hemisphere, it’s summertime, so the sun sets later — at 7:56 p.m. local time in Cape Town on Dec. 19, for example. The just-past-full moon rises that evening at 8:29 p.m. By 9 p.m., Canopus, the brightest star in Carina, the Ship’s Keel, is already 42 degrees high in the southeast, and Achernar, the end of Eridanus, the River, is high as one looks due south.

As in the Northern Hemisphere, Venus, Saturn and Jupiter are making a line in the sky, but from southern latitudes it runs southwest to west, with Venus only about 7 degrees high, Saturn at 17 degrees and Jupiter at 29 degrees, as one looks upward and to the right.

Full moon names are a product of where the people that name them live and the lives they lead. In the Pacific Northwest, the Haida peoples call the December lunar month Ta’aw Kungaay, the Snow Month, and the Tlingit call it Shanax Dis, “Unborn Seals are Getting Hair.” The Cree call it Thithikopiwipisim, or “Hoar Frost Moon,” according to the Ontario Native Literacy Coalition.

In China, the December lunation is called Dōngyuè, “Winter Month.” Given that December is the austral summer, the Māori of New Zealand call the November-December lunation Hakihea, or “Birds are now sitting in their nests.”