When the immense sound of the Ariane 5 rocket rumbles across Europe’s spaceport in French Guiana, it will signal the end of a journey decades in the making. Perched atop the rocket will be the James Webb Space Telescope (JWST), the most sophisticated and complex observatory ever constructed.

An enormous mirror 6.5 meters across, consisting of 18 gold-plated segments, will be delicately folded to fit within the nose cone.

That precious cargo carries the hopes and dreams of thousands of engineers and scientists like us who have worked for so long to make this observatory a reality. We’ll no doubt all be holding our breath.

If all goes well, humanity will have a new eye on the cosmos, with capabilities that far surpass anything that has gone before. The telescope will access realms that have been previously hidden from us, being too distant, too cold or too faint for even the venerable Hubble Space Telescope.

As light from the earliest stars has been stretched by the expansion of the universe over 13 billion years, we need instruments that work in infrared light, which we can feel as heat, to peer into this mysterious epoch of cosmic history. JWST is so sensitive that it could theoretically detect the heat signature of a bumblebee at the distance of the Moon.

We are poised on the edge of new discoveries about the origins of our universe and our place within it: insights that will fill the pages of the textbooks of tomorrow.

But before that can happen, we face an agonizing wait. Not only during the intense launch that will carry the US$10 billion JWST beyond the reach of our human hands, but also through the tense months of deployment, testing and transfer to a lonely outpost, preparing for the “first light” of a facility that has been described as the “most expensive astronomical gamble in history”.

No previous space observatory has been subjected to more testing and scrutiny than JWST. It has survived cancellations, design changes and technical mistakes. It has also survived budgetary woes, natural disasters such as Hurricane Harvey, a pandemic and even the threat of piracy as it journeyed from California to French Guiana through the Panama Canal.

That it weathered these storms is a testament to the international team responsible for the observatory, a worldwide partnership led by NASA, the European Space Agency (ESA), and the Canadian Space Agency, but encompassing hundreds of institutions around the globe.

The launch and beyond

With so many years and careers invested in JWST, all eyes will be on that rocket as it clears the tower at the spaceport. As the world holds its breath, JWST’s perilous journey will just be beginning. Over the ensuing weeks, a breathtaking array of mechanisms and sequential deployments must work perfectly, each step adding risk to the process.

Once the faring that protects the telescope separates, the observatory will deploy its communications devices and solar arrays, and embark on its 29-day journey towards the ‘Lagrange point’ (L2) – a position where the gravitational forces of the Sun, Earth, and orbital motions of a spacecraft interact to create a stable location – some 1.5 million kilometers from our planet.

Ariane will send JWST directly to this location without orbiting Earth first, but small rockets will fire during the first day to tweak the trajectory, and then a final burn will insert the observatory into orbit around L2 a month later.

As it travels to its destination, it will execute a delicate unfolding, dancing to a choreography years in the making. To tease out the faint infrared light from distant stars and galaxies, the whole observatory must be cold so as not to be blinded by its own infrared warmth.

It does this by keeping its back to the Sun and using an enormous parasol – a tennis-court-sized sunshield, made of five layers of thin plastic coated in reflective aluminum and doped-silicon, durable to withstand strikes by swarms of tiny meteorites. This sunshield will be the first to deploy, around a week after launch.

This will be followed by the unfurling of the petals of the primary mirror. All eighteen segments have to be aligned in space, adjusting and focusing them so that they work together as one giant mirror.

These deployments will involve 344 individual steps, providing a nail-biting wait for the team on Earth. If something goes wrong, we can’t go and fix it – it’s simply too far away.

Months of testing, calibrating, aligning and more testing will follow, as the telescope cools to 40K (-233°C). One of the instruments, known as MIRI, has to go colder still, to just 7K (-266°C). This will be made possible by thermally isolating it from the rest of the observatory on long legs, and using a special helium refrigerator.

Some six months after launch, JWST will finally open its eyes to the cosmos. It will peer back in time, to just a few million years after the Big Bang to witness the end of the dark ages, when matter first coalesced to form the simplest stars of hydrogen and helium. This unexplored era set the stage for the origins of galaxies, shaping our modern cosmos and seeding the universe with complex elements.

The telescope will also investigate the atmospheres of planets around other stars to understand their origins and potential habitability. Closer to home, JWST will turn its gaze on the worlds of our Solar System, and explore the rocky and icy remnants left over from the birth of planets. 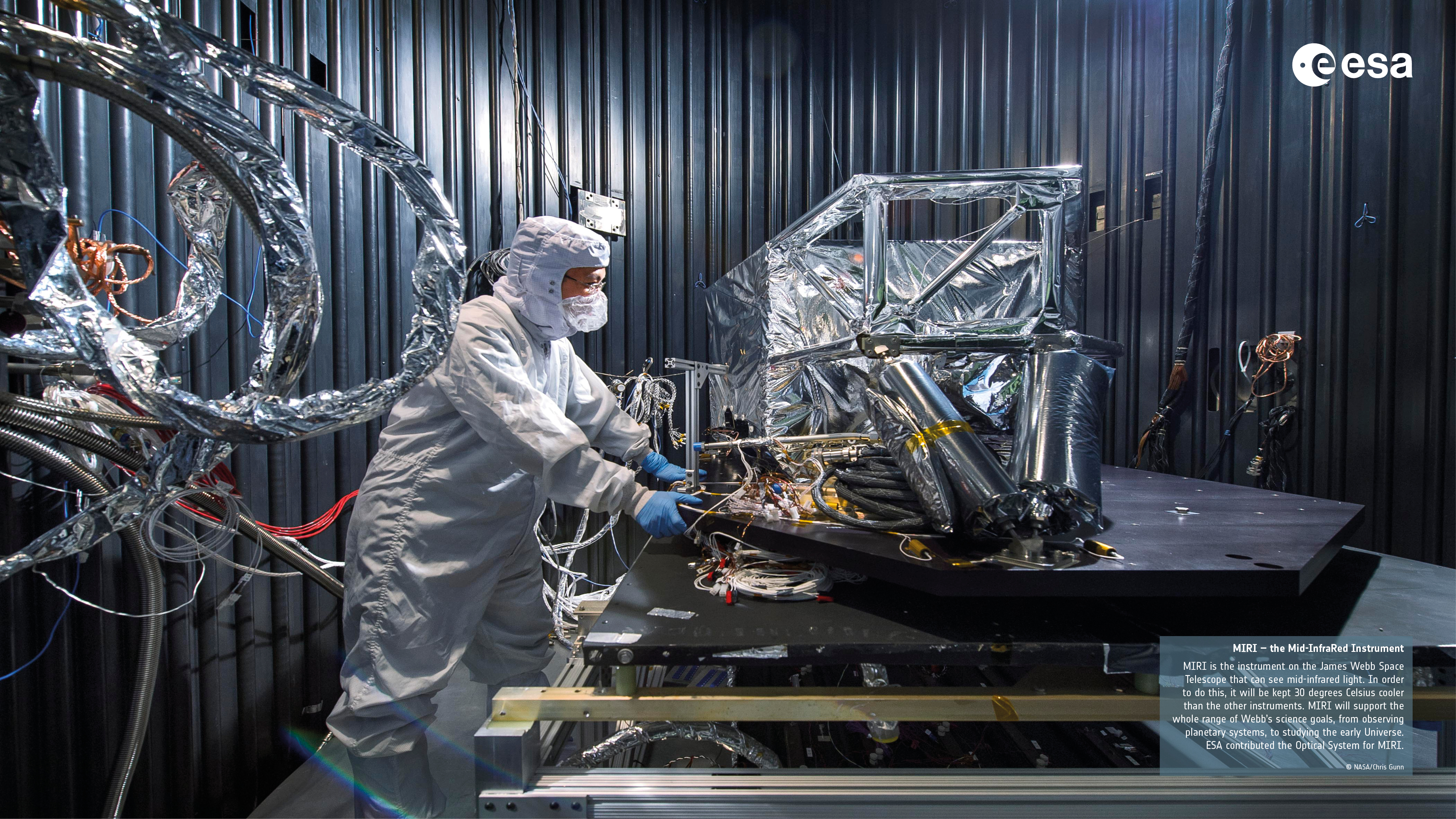 Crucial to this is the MIRI instrument that we worked on here at the University of Leicester, one of four that will deliver on the scientific promise of JWST. MIRI has been built by a transatlantic partnership of ten European countries plus the US, jointly led by Professor Gillian Wright at STFC’s UK Astronomy Technology Centre (ATC) in Edinburgh, and Professor George Rieke at the University of Arizona.

As the only mid-infrared instrument in JWST’s toolkit, MIRI will provide images and spectroscopy – a technique that breaks down light into specific wavelengths – allowing it to tease out the chemical signatures of JWST’s astronomical targets.

There is no question JWST will open the scientific floodgates, and may lead to unexpected discoveries that the JWST visionaries haven’t even imagined yet. We’re standing on that threshold, hoping that this complex observatory can finally realize our ambitions.