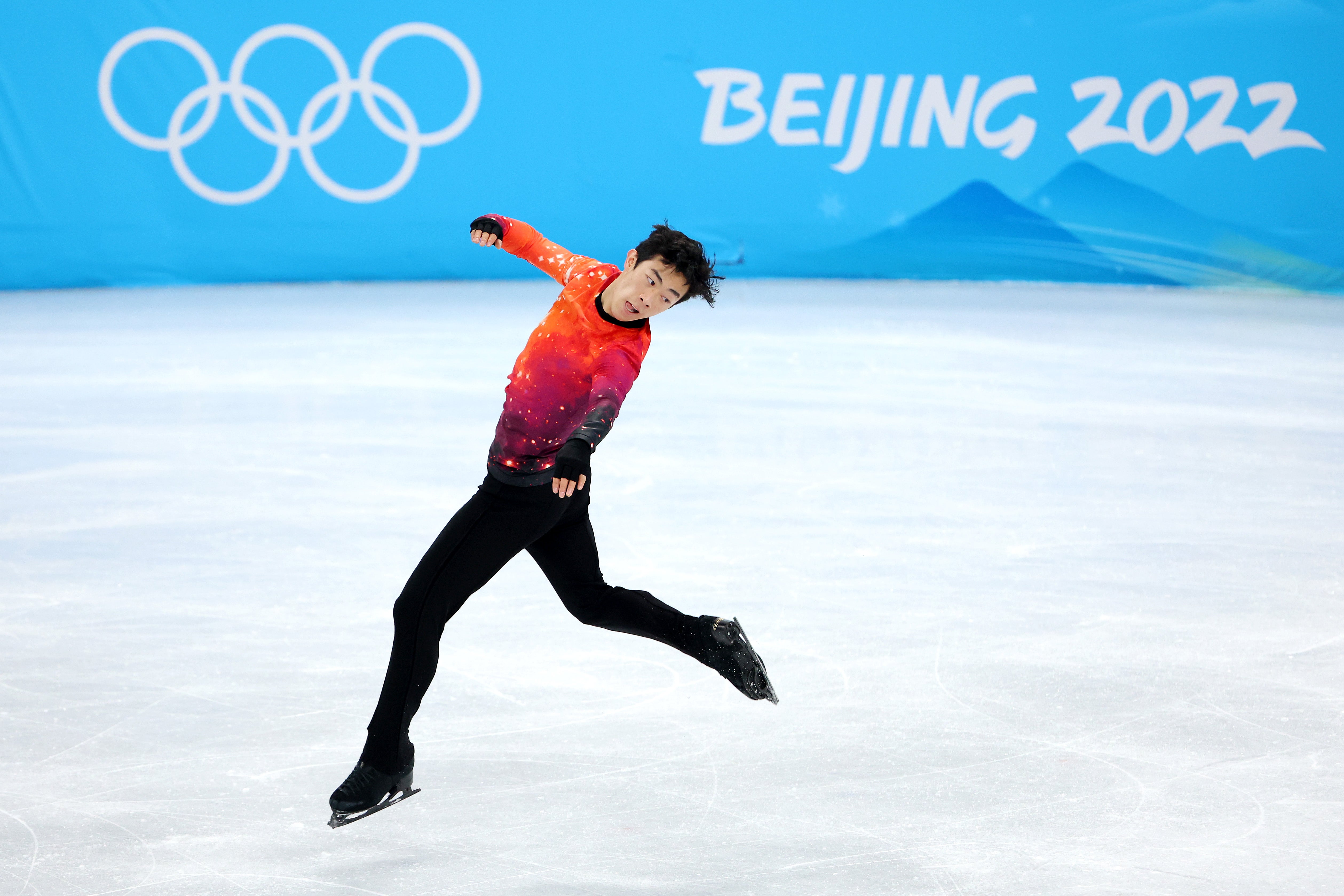 Today’s figure skaters are performing feats of athletic prowess that were unimaginable only a few decades ago. At the Winter Olympics in Beijing last week, U.S. skater Nathan Chen took home the gold with short program and free skate performances packed with quadruple jumps and triple Axels. And 15-year-old Russian skater Kamila Valieva became the first woman to land a quadruple jump—actually two—in Olympic competition in the mixed-gender team event. (According to news reports, Valieva has tested positive for a banned substance, the heart drug trimetazidine. At press time, the medal ceremony for team figure skating has been postponed.) Quadruple jumps, or quads, involve launching off the ice, completing at least four revolutions in the air and landing on one foot. Such achievements require exquisite strength, speed and grace—but the physics behind them is fairly straightforward.

Figure skating features roughly half a dozen types of jumps. They differ by which part of the skate’s blade one jumps off of (the front, also called the “toe pick,” or the inner or outer edge) and the number of revolutions made in the air (single, double, triple or quad). Toe jumps include the flip, lutz and toe loop. Edge jumps include the loop, Salchow and Axel.

Quad jumps—including quad Salchows and quad toe loops—have become common in the men’s competition (most of the top male skaters do them), and a number of women have landed them in competitions outside of the Olympics or in practice. The quadruple Axel is generally considered the most challenging jump because it requires a forward takeoff and four and a half rotations in the air. To date, no one of any gender has successfully completed a quad Axel in competition, although skaters such as Japan’s Yuzuru Hanyu have tried. And some experts think a quint—a quintuple, or five-revolution, jump—is theoretically within reach.

Deborah King, a professor of exercise science and athletic training at Ithaca College, studies the physics of figure skating. Scientific American spoke with her about how skaters perform these feats of agility, the physical boundaries of the sport and how today’s Olympic athletes are expanding them.

How did you get into studying figure skating?

I did my master’s in exercise science at the University of Massachusetts Amherst and didn’t really know what I wanted to do for a career after that, besides biomechanics in sports and exercise. There was a position open at the Olympic Training Center in Colorado Springs, Colo., in its sports science and technology division. When I was there, there was a figure skating camp. And one of the coaches that was there was really interested in studying the biomechanics of the triple Axel. So that pretty much launched my work into figure skating biomechanics—it was a really cool project. I had no experience with figure skating before that.

Can you explain the physics behind the main types of jumps?

Regardless of the figure skating technique that makes one jump different from the other, there are some basic physics that are common to all of them. From a pure mechanical standpoint, skaters, without a doubt, have to be in the air long enough to complete however many revolutions they’re trying to do. To get the time in the air for the jumps, that is related to jump height—and that is pretty much related to how much vertical velocity they can get when they jump off the ice. Depending on whether it’s a toe pick jump or an edge jump, the movement patterns they do to get that vertical velocity will differ.

For toe pick jumps, you’re sort of vaulting off the toe pick to pop up. And the edge jumps, it’s more like you extend your leg and maybe use your arms a little bit to get some of that vertical velocity. Particularly for the toe pick jumps, the horizontal velocity you have can be used to do more like a pole-vaulting-type motion. In that case, extra horizontal speed could be helpful to store more energy in your leg. You’re coming in with this sort of linear momentum, but as you rotate over the leg, that horizontal motion is actually now being redirected a little vertically. It’s called tangential velocity. So, certainly, horizontal velocity can be helpful for generating vertical velocity. Horizontal speed is probably not going to help as much for an edge jump—you’re mostly just pushing off and generally getting work out of your muscles.

Why are these jumps so difficult to perform?

Skaters have got two things that they need to do at once, which makes it really hard: They need to spring off the ice—that’s going to give them that vertical velocity for the height—and they need to start rotating really fast. As they’re pressing off the ice to go up into the air, they also need to be creating the torque [a type of rotational force] against the ice, which is going to give them rotational momentum. They need that rotation momentum so that when they come off the ice, they can pull into a really tight position and rotate really fast.

Is this like when one spins in an office chair and brings in their arms to spin faster?

Exactly, the actual physics behind that is: you’re reducing your moment of inertia, which increases your rotational velocity.

What do skaters need to do to complete more rotations during a jump?

To do quad jumps, compared with triple jumps, for most skaters, it comes down to rotational speed. From a theoretical standpoint, extra height will help. Skaters doing quads generally have higher jumps.

Is there a fundamental limit to how many spins a skater can do?

I absolutely think people could do quintuple jumps. But there is only so much strength a person can have—and power they can produce—as they jump off the ice to get so high. Even if you think of the vertical jump record at the [National Football League Scouting] Combine, people are not jumping two to three meters in the air. And you can only get so narrow. You’re limited by the breadth of your shoulders and hips—you can only get down to a certain minimum moment of inertia based on your specific anthropometry [body proportions].

The other factor where skaters could potentially improve—in order to do more rotations—would be rotational momentum as they come off the ice. As they do their approach or footwork into the takeoff, they create torque about the rotating axis as they push off the ice. If they can get more rotational momentum as they’re still exploding upward, then they can rotate faster with that small body position. It’s sort of like: if you’re on a tire swing, and someone pushes you harder, you’re going to rotate faster. So there are three things you can play with.

Skaters should be mathematically able to do a quint Salchow or toe loop. A quad Axel is, to me, probably the limit because it is 4.5 revolutions.

Do male skaters have an advantage over female ones when it comes to doing more rotations?

Generally, you’re seeing just the differences in muscle mass between male and female skaters. Obviously, there’s overlap, and the top end of the female skaters flow over into the male ones. But if you look at the bell curves of strength and power, you do have greater strength and power from most male skaters. Most of the male skaters are jumping a little higher than the female ones, and most of them are likely going to be able to generate more rotational momentum coming off the ice. You could [argue male skaters have] a disadvantage in that, generally speaking, they’re not going to be able to get as tight or as small a moment of inertia. So it can be harder for the guys because, generally, skaters tend to be petite.

Is there an optimal age for figure skating?

In terms of women, you see lot of skaters hitting their jumps before puberty. It can be particularly hard for female skaters when they go through puberty because changes in your body size and shape make you have to relearn your jumps. It also happens to men, but that’s probably more a result of a mismatch in growth spurts because the muscles have to keep up.

In the 1998 Winter Olympics in Nagano, Japan, French figure skater Surya Bonaly performed an impressive—and technically illegal—backflip on the ice. How did she achieve that?

It’s kind of the same basic physical principles as other jumps. The rotation’s about a different axis. As opposed to the vertical axis involved in most figure skating jumps, she was rotating about what lot of people call the flip, or the tumbling, axis. When you’re watching gymnasts, they go more head over heals. Some of same principles are involved—for example, you need to be high enough that your body rotates over [for one backflip]. Gymnasts do, like, double backflips. But you could not see, off of ice, a triple or quadruple backflip. Landing on ice is also difficult. If you come up short, it’s not a particularly forgiving surface.

Ouch, I can imagine. What impact—quite literally—do all these jumps have on the body?

We’re trying to look at the forces involved in landing. Not a lot of people have done that yet. There’s not a lot of ready-tailored equipment that can be attached to a skate. My colleagues at Brigham Young University and I instrumented a figure skating blade with sensors that would measure force. When we got it calibrated, COVID hit. So we haven’t actually measured the forces yet.

We have some ideas of how big we think the forces are. Most people would say the landings are somewhere between five to six times body weight, up to maybe 10 to 12 times body weight. And it’s all on one foot, too. It’s a lot of abuse on the same leg, over and over again, on a really hard surface. Skaters do have a lot of injuries. If you watch it on TV, it looks so graceful, easy and beautiful. But if you go to the edge of a rink while they’re practicing, you can hear the sound of the takeoffs and the landings, and you quickly get an impression of the magnitude of impact forces.