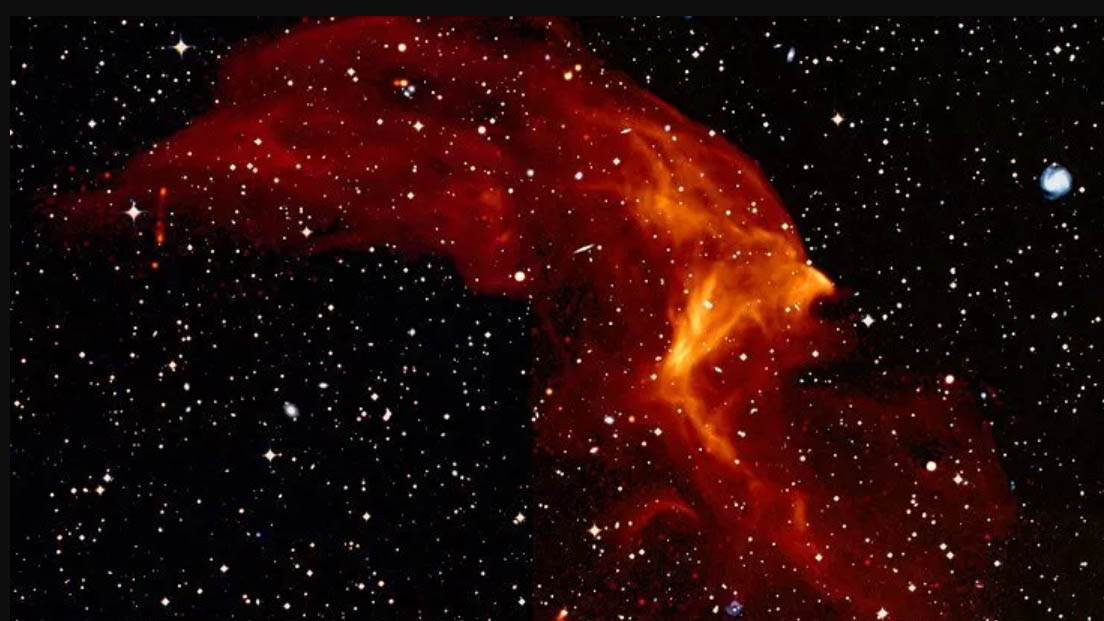 What happens when two of the largest objects in the universe collide?

Simple, says a new study: They create one of the largest shock waves in the universe.

Located about 730 million light-years from Earth, Abell 3667 is a galaxy cluster in chaos. Actually composed of two clusters (or groups) of galaxies colliding into one another, Abell 3667 contains more than 550 individual galaxies slowly stirring into one big cosmic gumbo.

It’s not readily apparent to most telescopes, but this cosmic collision has created an enormous disturbance in the region — a gargantuan shock wave flaring out of either side of the merging cluster, and visible only in radio wavelengths.

Now, a new study published Feb. 7 in the journal Astronomy & Astrophysics offers the most detailed picture ever captured of this enormous wave. Using the MeerKAT radio telescope array in South Africa, the researchers imaged both halves of the shock wave’s radio component — also called “radio relics” — and found that the structures are far more complex than previous observations indicated.

“The shock waves act as giant particle accelerators and accelerate electrons almost to the speed of light,” lead study author Francesco de Gasperin, visiting scientist at the Hamburg Observatory in Germany, said in a statement. “The waves are threaded by an intricate pattern of bright filaments that trace the location of giant magnetic field lines and the regions where electrons are accelerated.”

According to the researchers, the shock wave first blasted into being about 1 billion years ago, when the two galaxy clusters that make up Abell 3667 first collided. Galaxy clusters are the most enormous gravitationally-bound structures in the universe; when two of them merge, they release the largest amount of energy in a single event since the Big Bang, the researchers said.

As the wave shot electrons into space at near-light-speed, the particles tore through magnetic fields in the region, emitting the twin arcs of radio waves seen today. The researchers found that those radio arcs each move at more than 3.3 million miles per second (5.3 million kilometers per second), are about 13 million light-years apart from each other; and each measure 60 times larger than the entire Milky Way galaxy, which spans about 100,000 light-years in diameter.

That’s one mighty explosion — and for astronomers sitting safely across the universe, one “spectacular” view, the researchers said.